13 intrepid riders started what turned out to be quite an eventful ride that nearly had to be cancelled after the first 1.5 miles.

Freak incident – John B managed to get a loose pebble into his disc brake and it bent the pad spring.

Fortunately Quick Release wheels were soon removed, the disc pads were out and the spring straightened sufficiently to enable the ride to continue. Getting things back together was a little slower as it was proving tricky to get the pads and spring lined up and fastened back into the brake housing. Eventually this was achieved and the ride resumed along the cobbles out of Lymm.

After another half mile a call came to stop – we have a puncture. We stopped at the point we were going to join Grammar School Road.

Whilst we waited for the knights in Lycra and High Vis to come to the rescue of our Damsel in distress, some of the guys offered to help and duly striped the wheel down to its component part, checked the tyre, replaced the tube and successfully reinstall everything back to working order.

The rest of us looked along Grammar school road only to realise our route was totally blocked by a Police cordon, Fire Engines and an Ambulance.

Time for a diversion and we hadn’t yet got out of Lymm!

Group re-routed around the cordon and we were off again, hopefully without any further mishap.

We continued on our lazy figure of 8 travels along familiar roads towards Appleton Thorn – but there was confusion to some in that we were travelling them in the reverse direction to previous times, so most people were reluctant to zoom off out front.

We regrouped at the cross roads in Appleton Thorn for a lecture on the history of the village, the thorn tree and the area in general!

It was onward and down to Walton Hall Gardens, with just a little uphill, before our Lunch stop.

After lunch we set off retracing our course for a few hundred yards, but we managed to loose half the group – don’t know how it happened, but it did!

All successfully regrouped we started our return journey though Hatton, where someone took a shine to the new library and was perusing the stock for a little while – wasn’t long though as it was an old telephone box put to a new use.

Onwards through Stretton, with reminiscences of rides from the Stretton Fox. Passing the Thorn Tree again, without the lecture this time, and heading to a well deserved downhill section into Grappenhall where we were due to experience more cobbles. Only to be confronted with a “road closed” sign and only the very smooth pavement to get by on – most took to the pavement with glee, even beyond the closure, but Ray did venture back onto the cobbles and commented that it gave him double vision.

On the outskirts of Grappenhall our camera man for the day, Richie, departed homeward bound and handed over the camera to Phil B.

Unfortunately in crossing the main road Phil was still attaching the camera and wasn’t following the group, (no back marker on the corner either!). We went on blissfully unaware he was missing, when we did realise, search parties were dispatched back along the route, but no sign of Phil. We were only a half mile from the ride end so we decided to finish the ride and phone and talk Phil in – no need he was already there and waiting for the group.

All successfully reunited we retired to John B’s for well deserved sustenance, conversation and reminiscences.

The afternoon sun, food and drink appeared to be enjoyed by all. 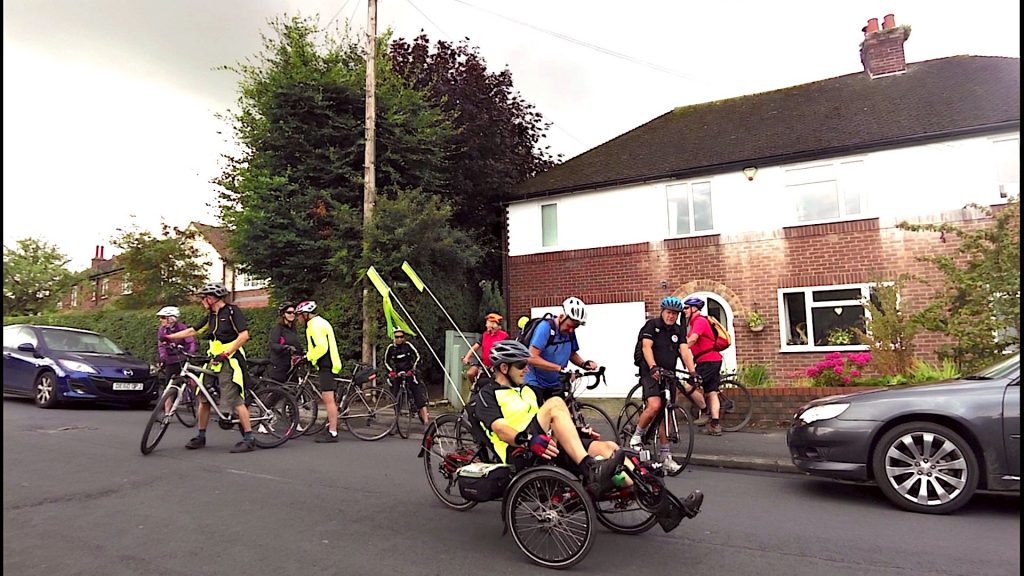 Think John may have had the shortest commute! 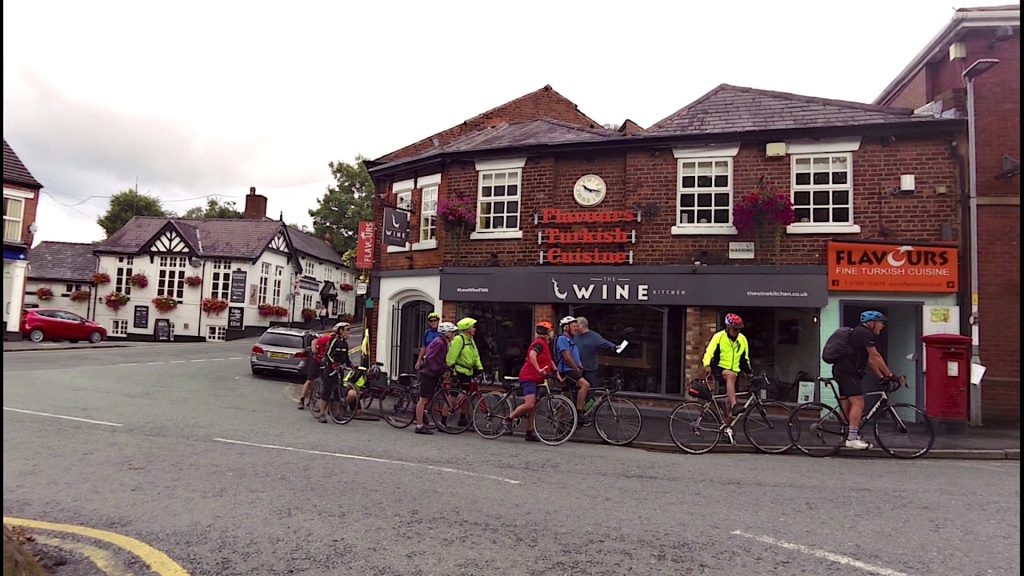 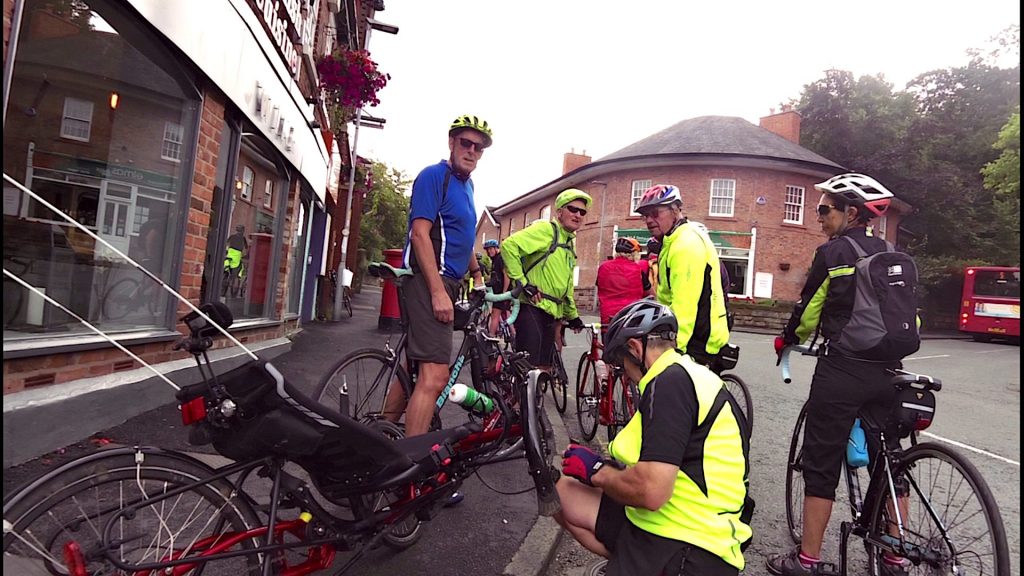 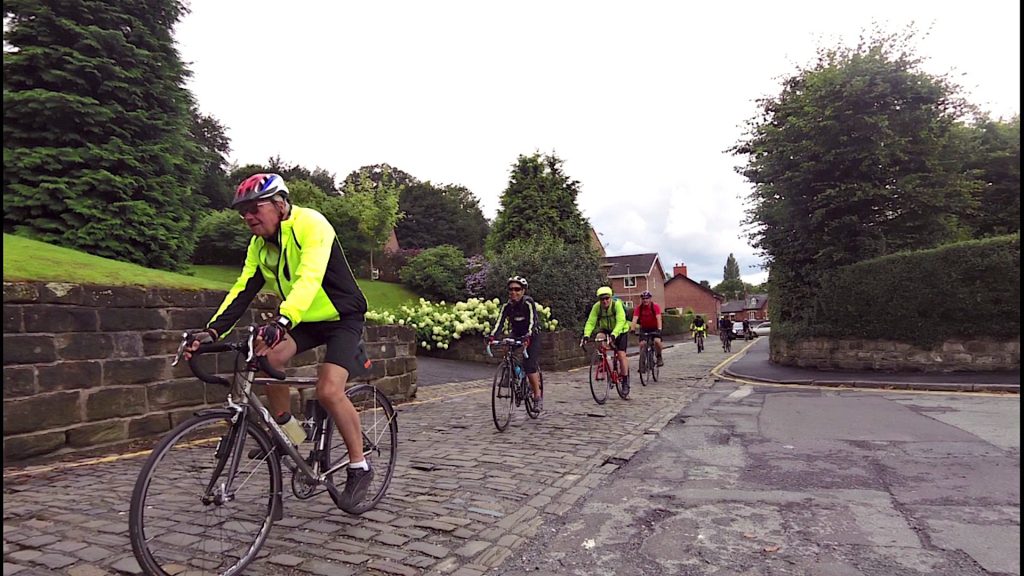 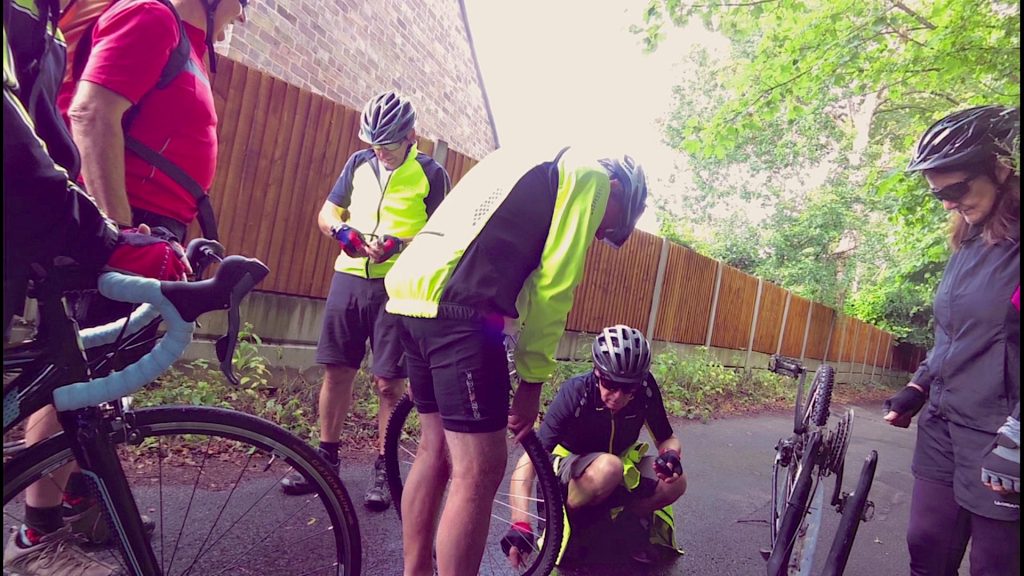 Not for long though, could be one of those days! 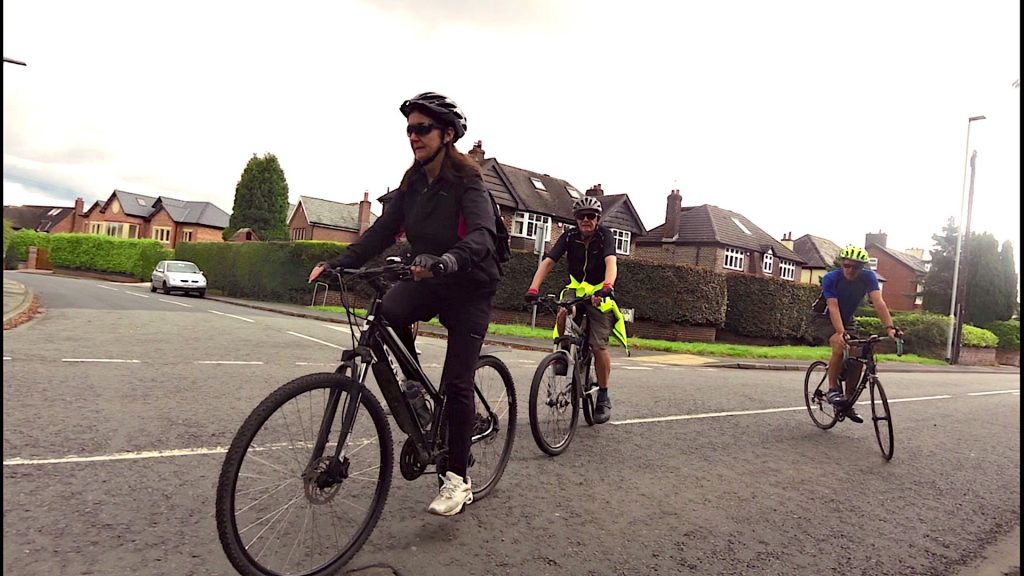 Managed to get her mobile again, what would you do if you were on your own Enid? 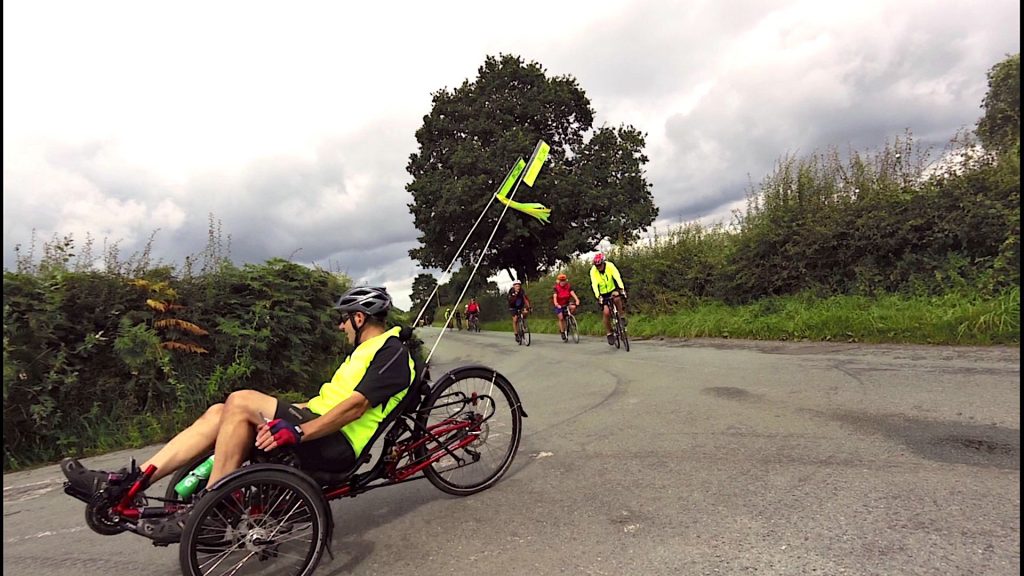 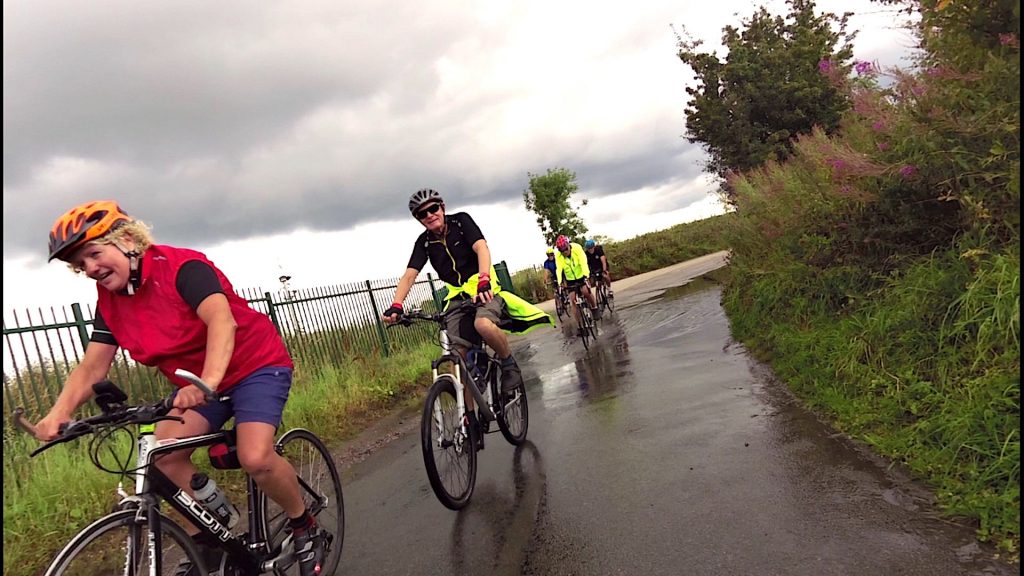 Not quite as bad as the Guild Wheel… 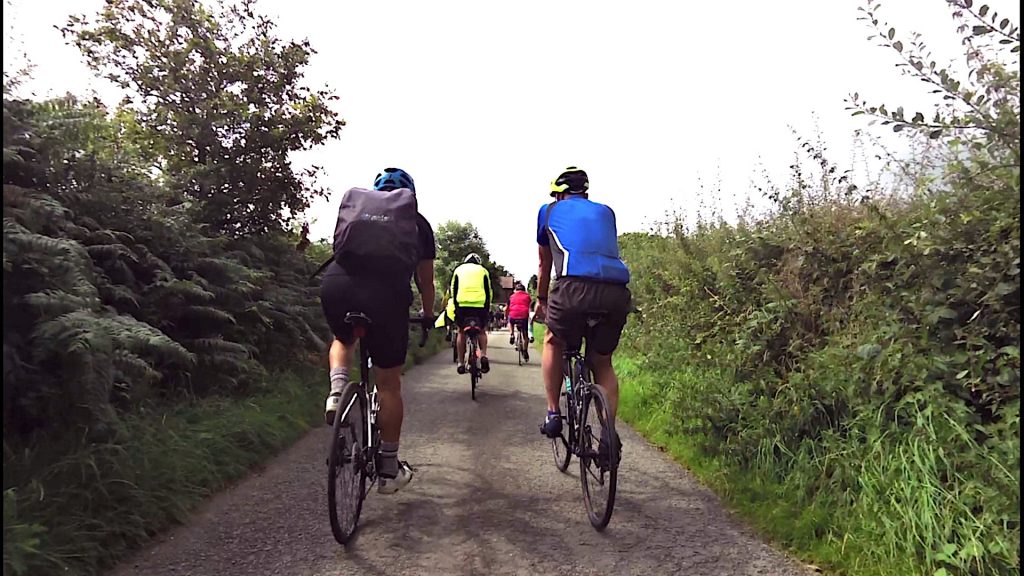 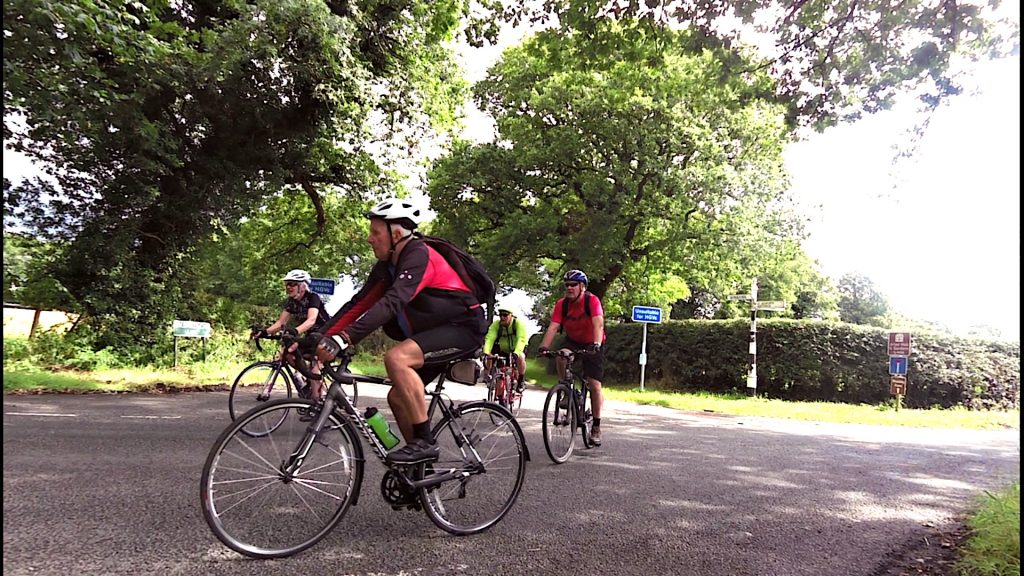 Unusual to see Denis at the front! 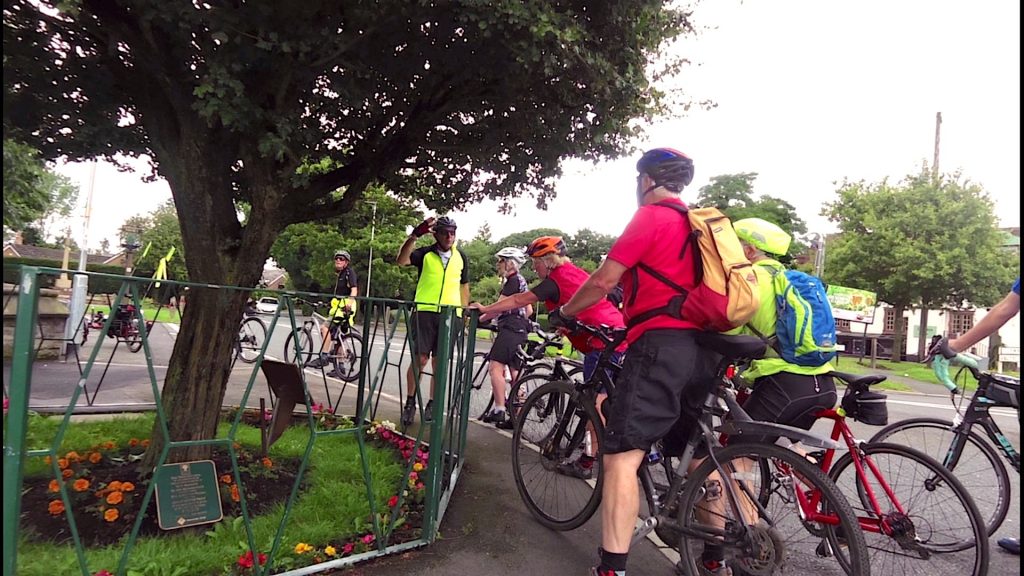 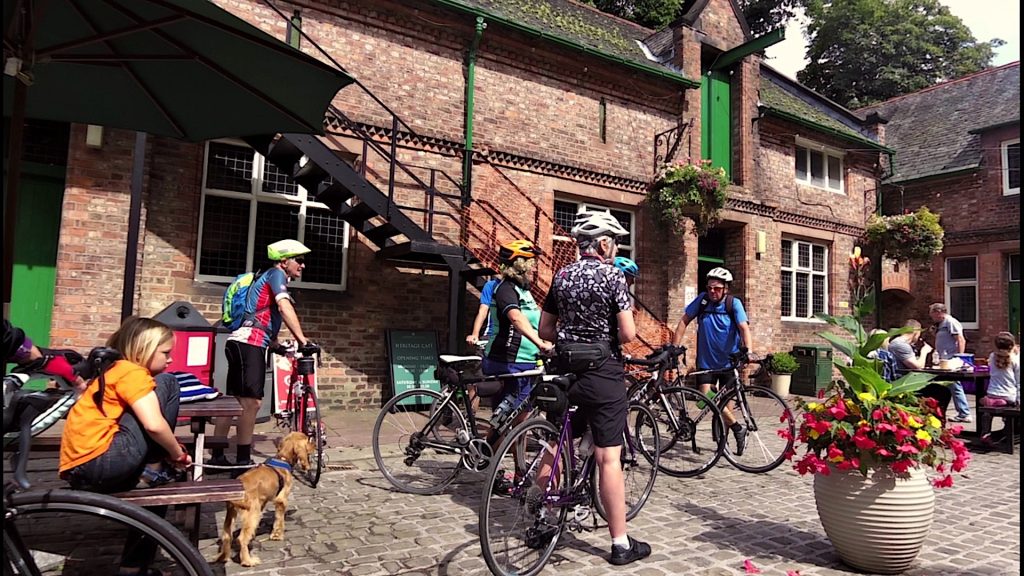 Nothing to play on this time! 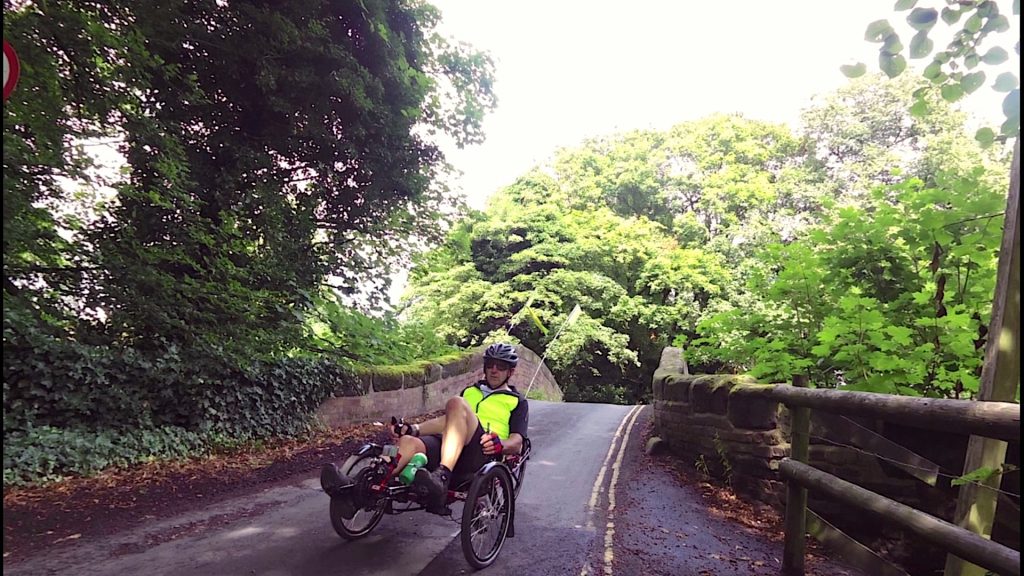 You’ve lost them all John! 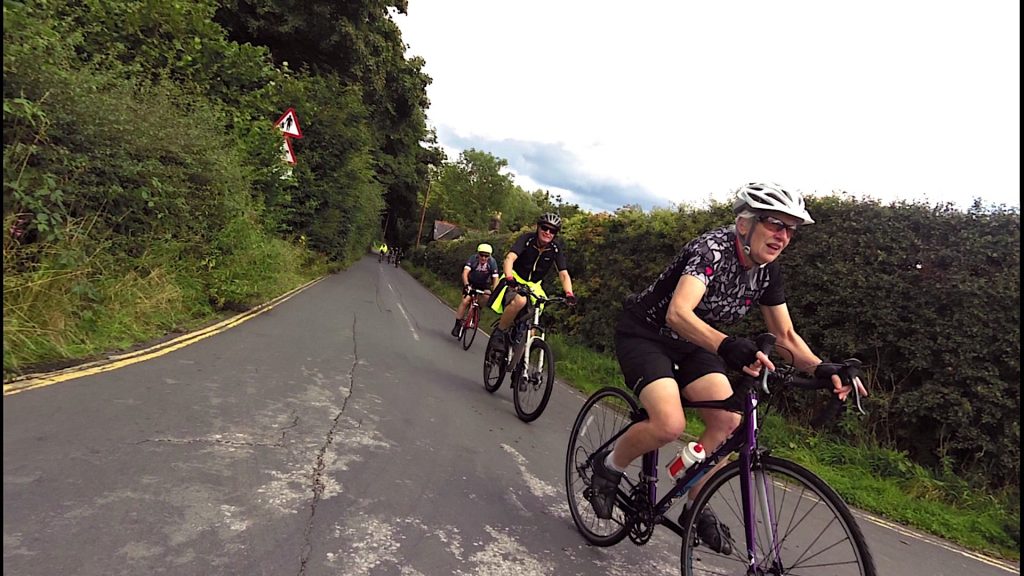 Seeing a lot of that road bike lately Joyce! 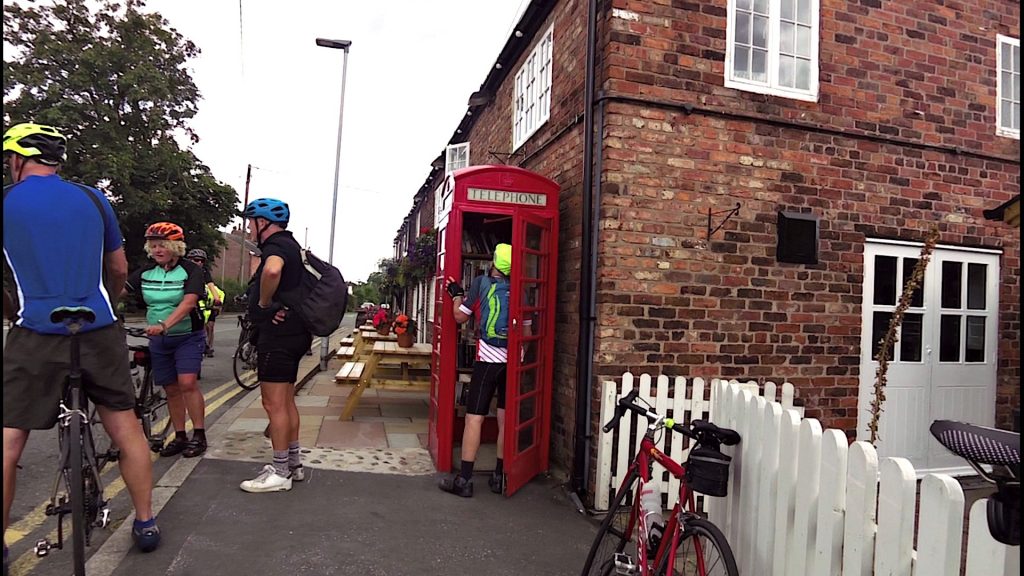 Postbox Library, where will Superman get changed now! 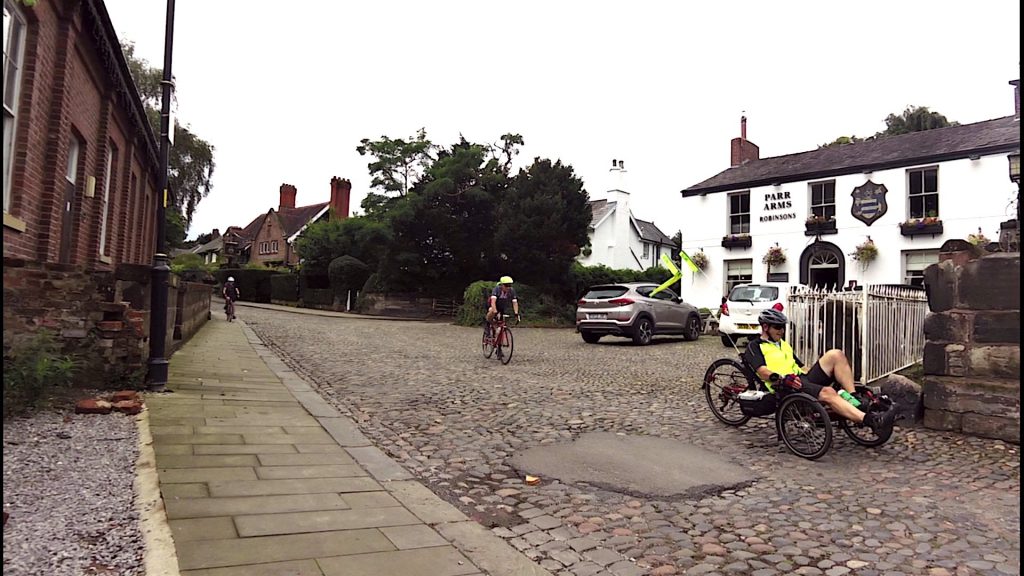 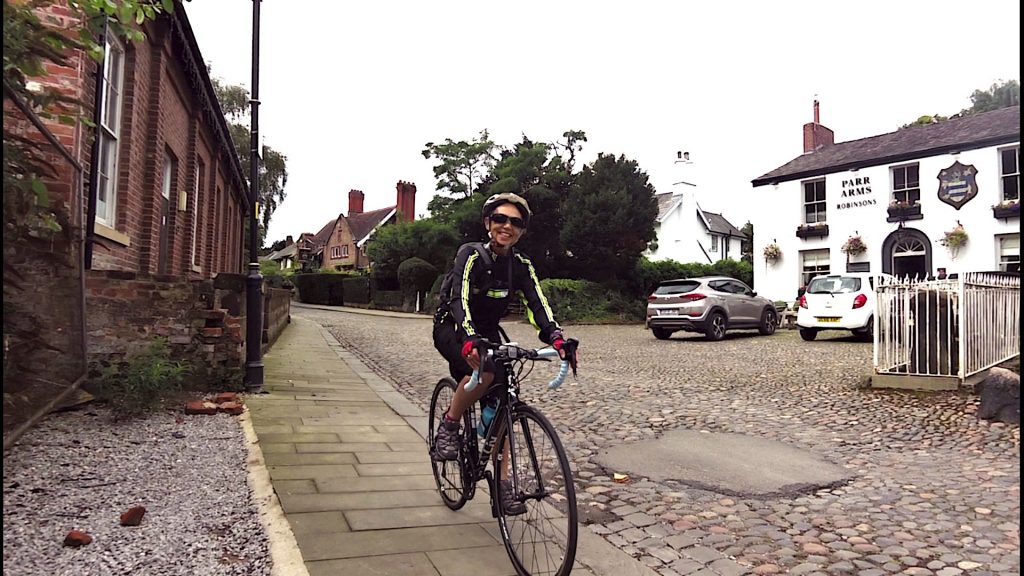 That’s cheating Rita, use the cobbles next time!