We await feedback from those who took part, but the number of bikes that required a little TLC back at Gearing Up would suggest it was an eventful ride!

Anglezarke Loop (aka Ride of Attrition)

Ten brave souls arrived at the Hare Hounds pub in Abbey village, blessed with some glorious bright sunshine; great day ahead it seemed. Just as we prepared to set off though, Paul who had his bike locked onto a very swish looking bike carrier was all set to go when he discovered he had left the key to the carrier back at home – disaster! However, help was at hand from Steve who suggested he could twist and turn the bike and remove it from its locked carrier – having watched him do it, I’m still not clear how he managed it. Anyway, Paul was now able to don his helmet and gloves again and join the ride. Well-done Steve, as for you Paul, in future, keep the carrier key with your car keys, just saying!!!

Off we set through Withnell, Brinscall and onto the Goit (a channel moving water between the various reservoirs on the West Pennine Moor using nothing but gravity, very clever these Victorian water engineers). Jim H was the first faller in the group when he didn’t quite negotiate his way up a short, muddy incline on the Goit. White Coppice was up next but due to some heavy plant blocking our route to Healey Nab we had to re-trace our steps back to the White Coppice cricket field and take to the footpath/bridleway diversion to Healey Nab where we passed through a flock of sheep blocking the bridleway. It was up and over Healey Nab and very quickly into Rivington village for the climb up Sheep House Lane – a tough climb. We then left the tarmac for a while as we negotiated our way up the bridleway towards the Pigeon Tower. It was on this climb that we had the first of our 3 derailleur difficulties.

Denis was the first as he misjudged the climb up to the Pigeon Tower and ran into a rather high grass verge causing his derailleur to rest amongst his back wheel spokes. (So that’s what really happened is it?) Despite his best efforts to straighten the offending gear changer he decided discretion was the better part of valour and would sit out the rest of the ride in the Rivington Barn café. Jim T agreed to pick him up on his way home at the end of the ride. Fortunately, as we later discovered, Denis found he was able to nurse his bike back to Wigan rather than wait in the café, just as well, because he would have been sat there for the best part of 2/3 hours otherwise.

Onward and upwards was the mantra as we continued with our reduced numbers. It was now probably the toughest climb of the day as we turned off George’s Lane up towards the Winter Hill TV relay masts. Everyone was in the groove; silence was golden as we concentrated on this tough climb, then another derailleur malfunctioned causing Thelma to hit the tarmac. Fortunately, no damage to Thelma’s knees, elbows or anything else but once again the derailleur looked less than healthy. Unlike Denis, Thelma had Jim H on hand to offer his best advice and ‘fettling’ skills and eventually got the bike going with some limitation on the range of gears she could now use.

With most of the serious climbing now out of the way we could enjoy some more downhill and undulating terrain as we moved across the moors towards Smithills and onto Colliers Row Road before following a number of bridleways through to the hamlet of Horrocks Fold. From here we crossed the A675 to drop down towards Dunscar Golf Club and join Longworth Lane farm track. It was as we joined Longworth Lane that our third derailleur disaster occurred as Jim H discovered his ability to change out of anything but his ‘granny gear’ was somewhat limited. In the meantime Thelma was having increased difficulty when climbing due to the limitations of her gears and it was at this point that an exit route was explored and agreed. Paul B and Paula also found this exit strategy attractive. So, once we had reached Delph reservoir Steve, Thelma, Paula and Paul took their leave and stayed with the tarmac through Belmont village and along the A675 back to the car park at Abbey village.

In the meantime, Jim T, Alan, Phil, Gary and Jim H continued on the planned route, leaving the tarmac at Delph reservoir and tackling the Witton Weavers Way. This bridleway runs parallel to the A675 and is a rough and tumble bridleway but has no serious climbing involved and provides excellent mountain bike trail riding. At the end of the Witton Way is the final stretch of road riding and after a short uphill climb it is a fast decent through Tockholes village and into the Tockholes and Roddlesworth Reservoir Woods entrance.

It was at this point Gary suggested a route back to the Hare and Hounds but did warn us that it may be a little ‘nadgery’, none of us really grasped this term but obligingly followed him. Tree roots, steep bankings, short wooden bridges, and generally difficult riding probably fell into the category of ‘nadgery’. We all seemed to enjoy the challenge, got down without any mishaps and had a final run back to the car park at the Hare and Hounds. A great ride which took a little longer than planned but that was largely down to the 3 derailleur malfunctions we had. 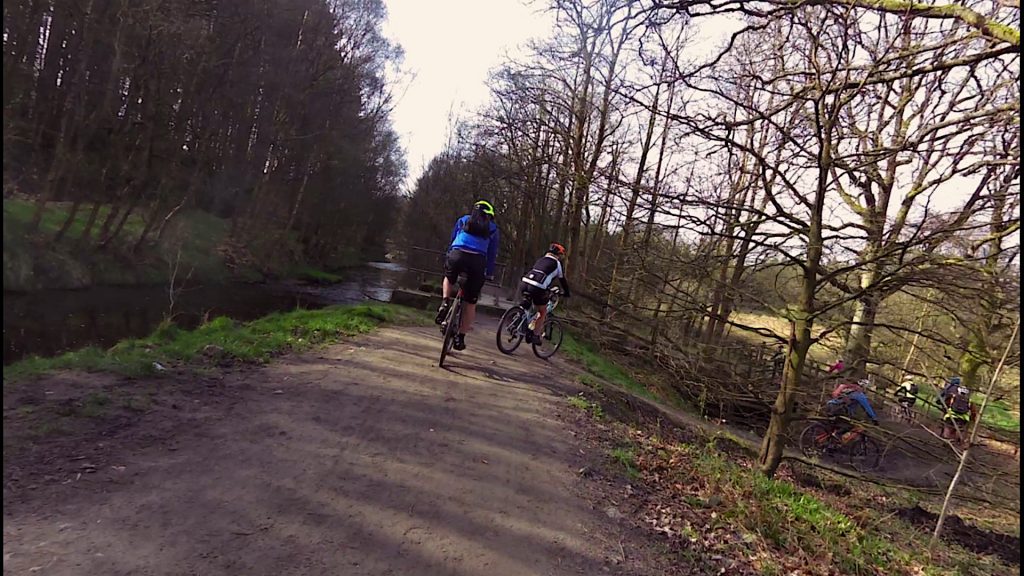 I’ve just goit to ask, that wouldn’t be the Goit by any chance would it? 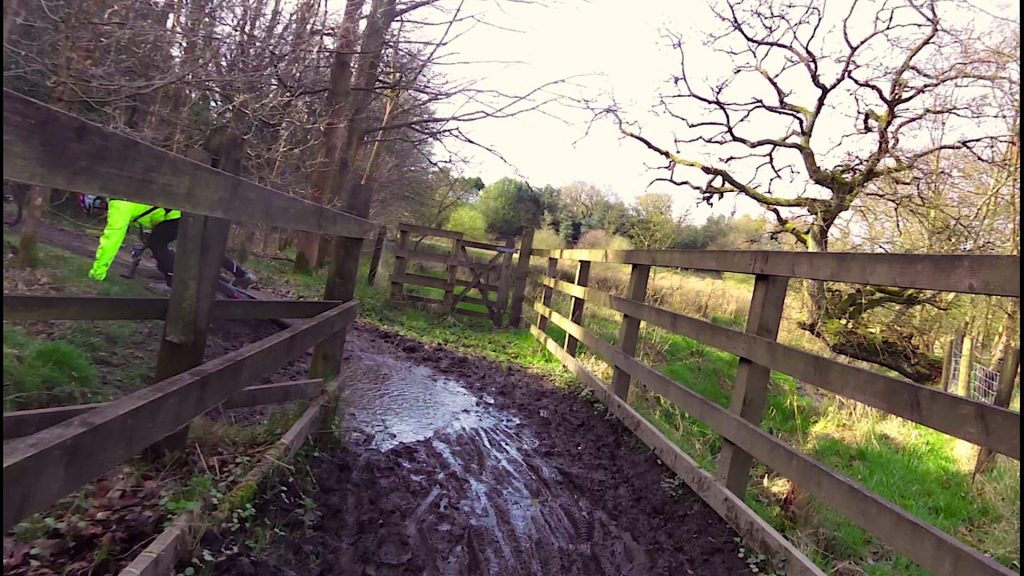 Another one bites the dust, well not exactly dust. Cant imagine what could have caused him to fall. 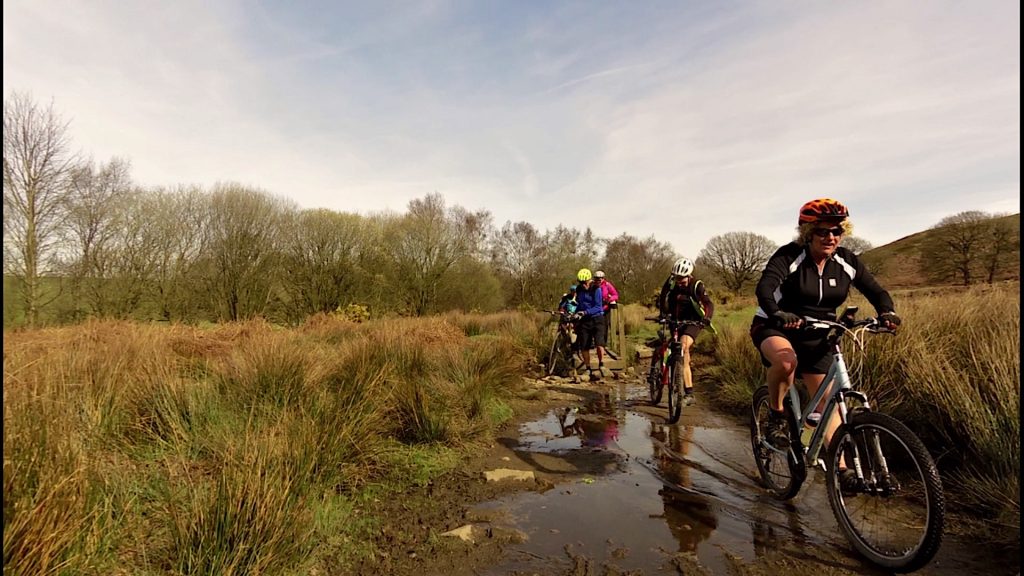 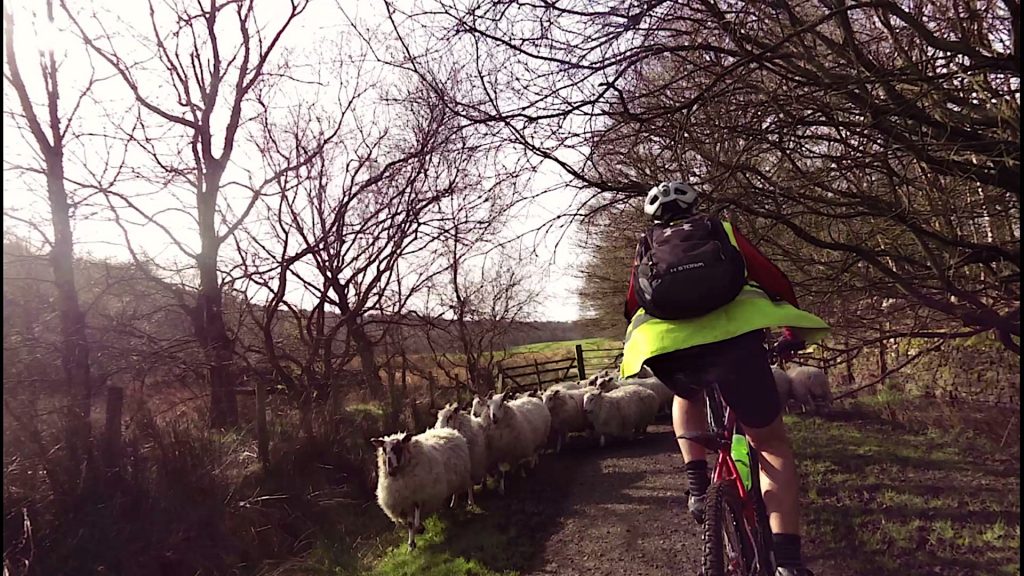 What the flocks going on here? 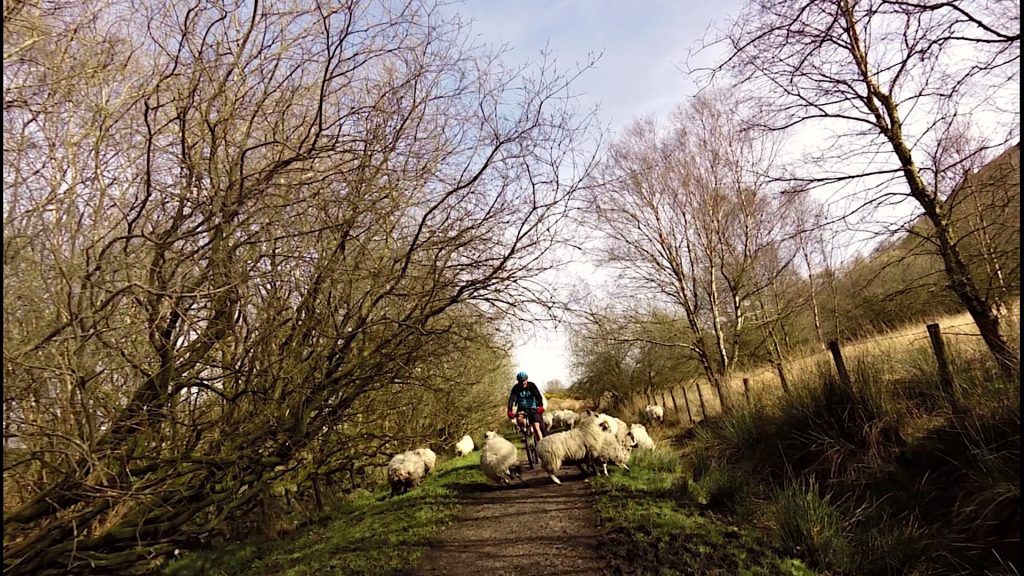 Is that ewe Alan? 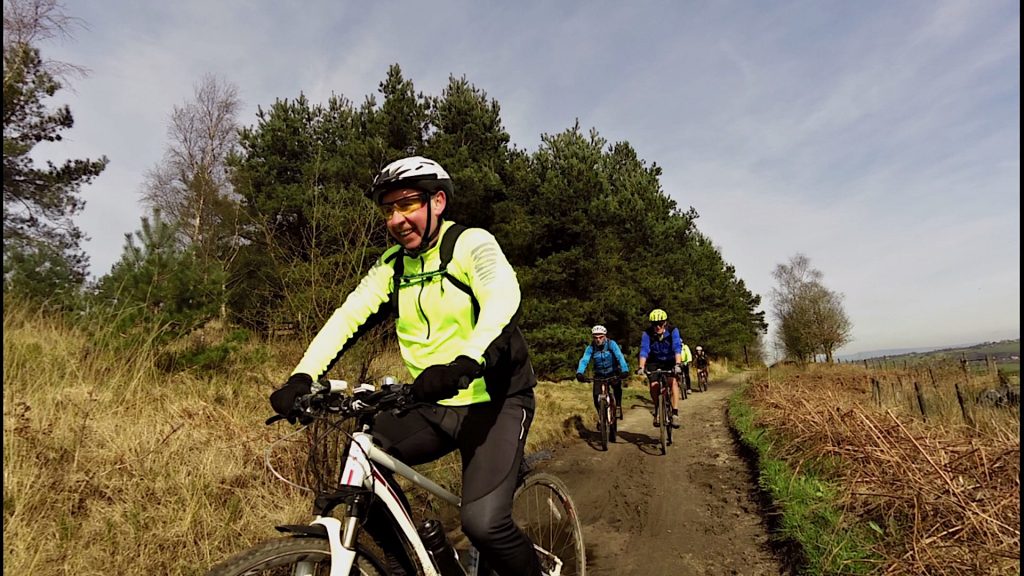 Only riding a bike downhill can generate that sort of expression! And he nearly missed the ride! 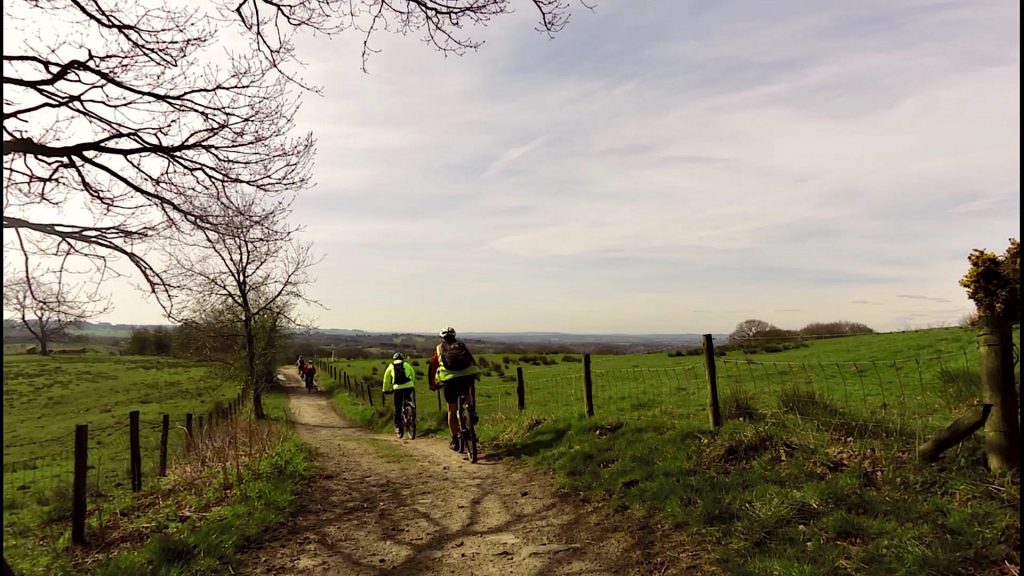 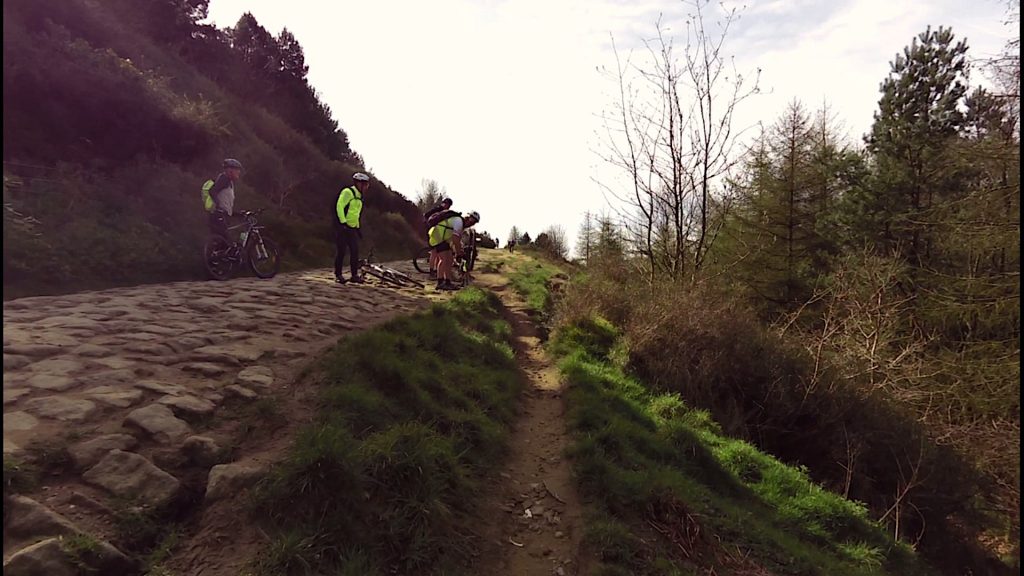 Another mechanical, how did it happen again Denis? 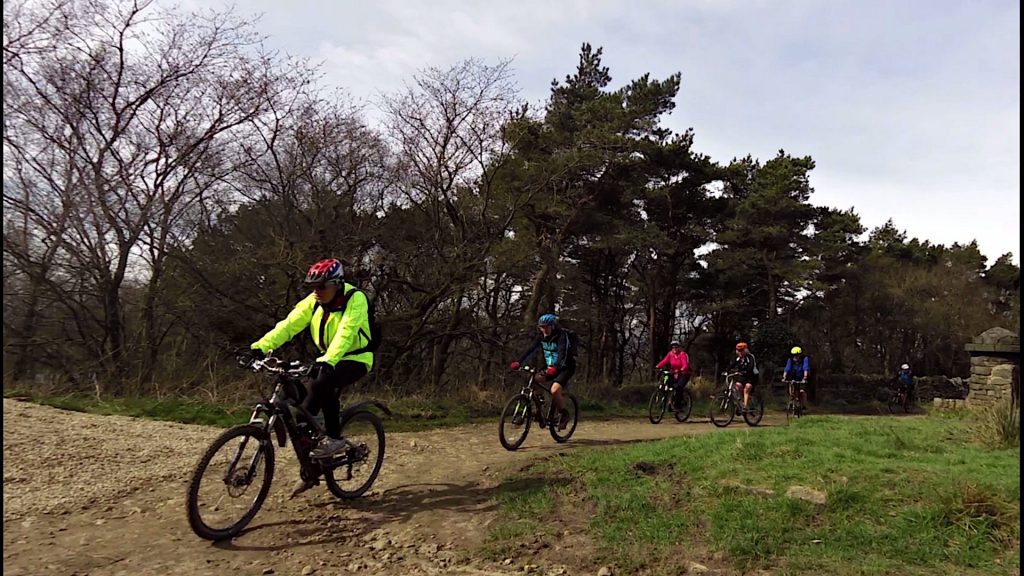 With Denis pointed in the right direction for home, it was time to press on! 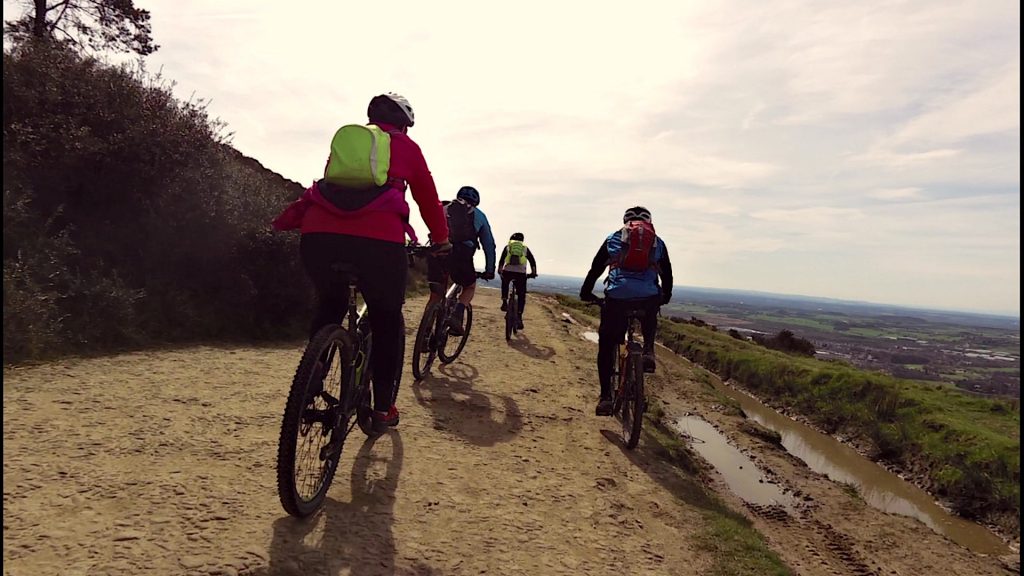 Well worth the climb don’t you think! 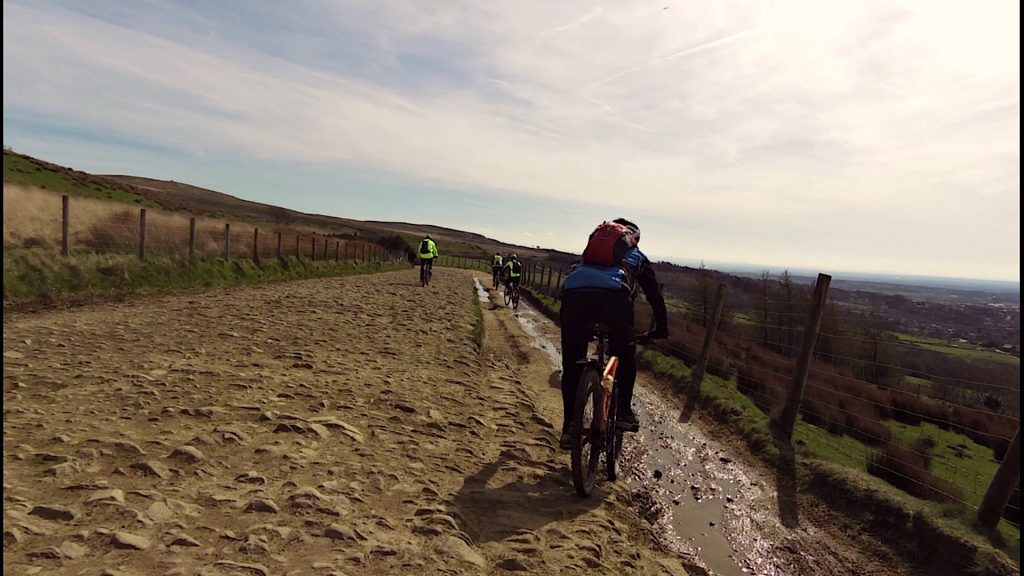 Probably the only time you’d pick the wet line, unless you were on a full suss that is! 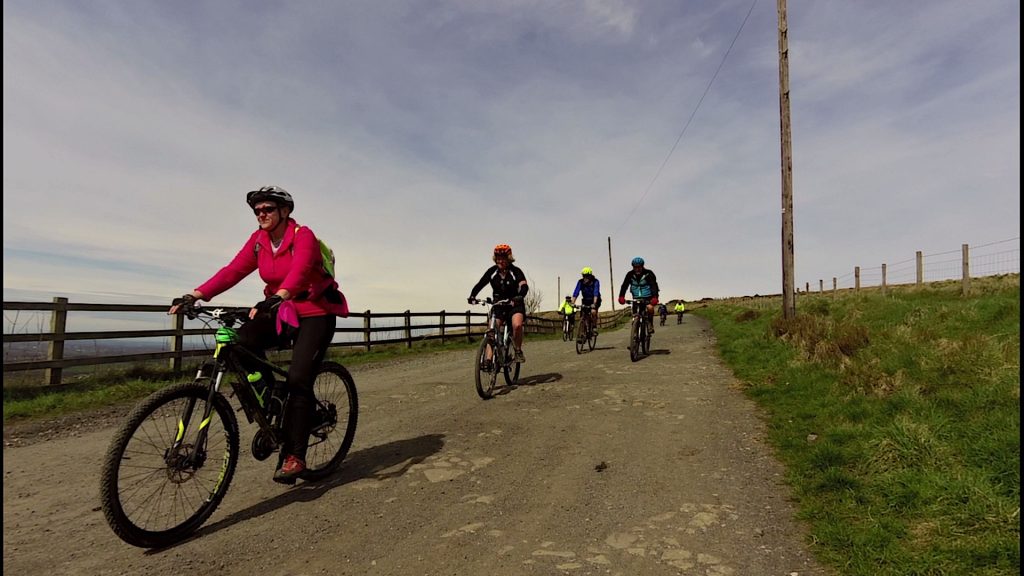 After the slog up Rivi, Paula looks likes she’s just tootled down the canal! 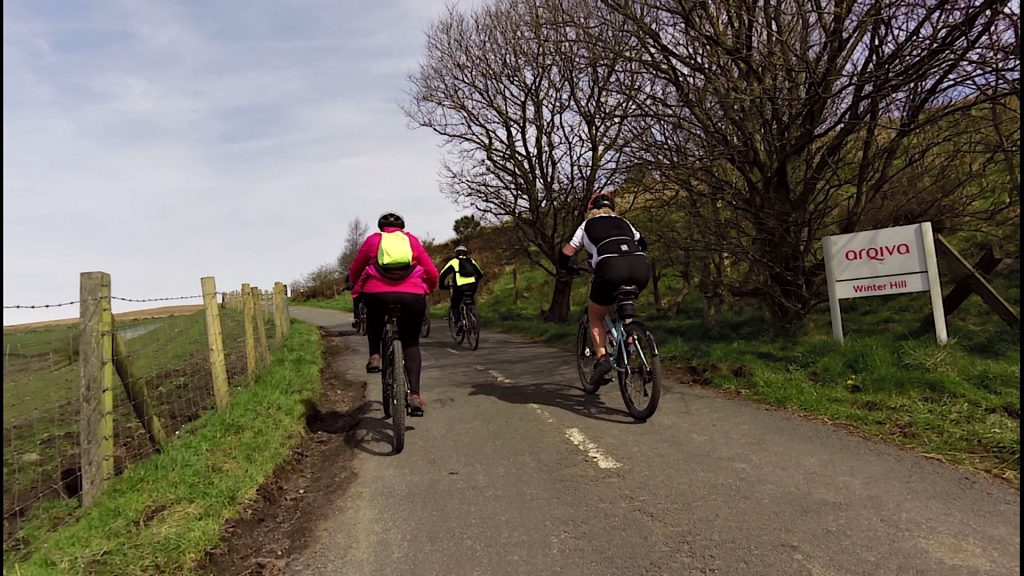 To pinch a line from this eighties No 1 hit “The only way is up” Bonus point if you can guess the artist. Full name that is and no cheating!!! 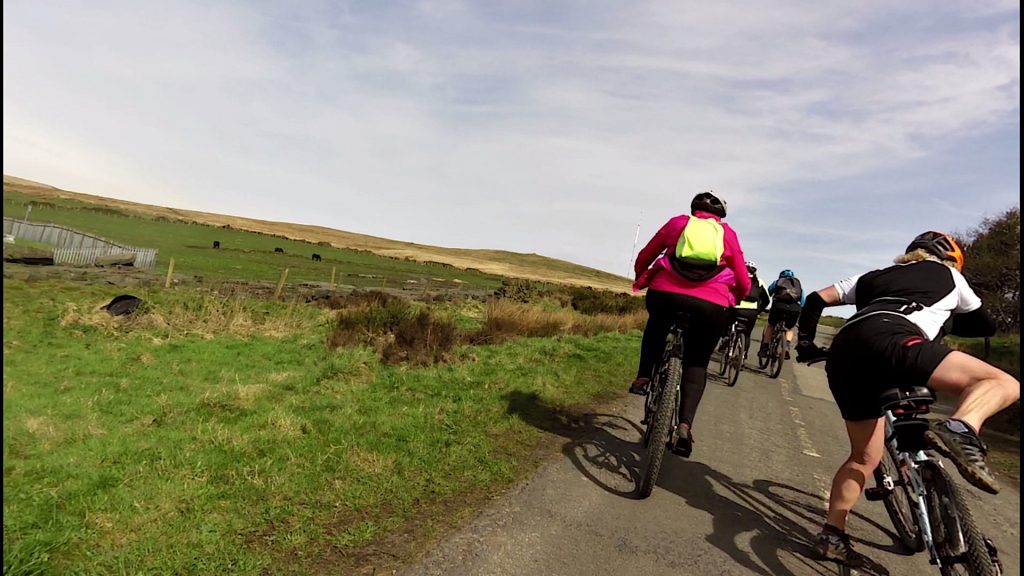 Look’s like Thelma’s managed to find another way though! 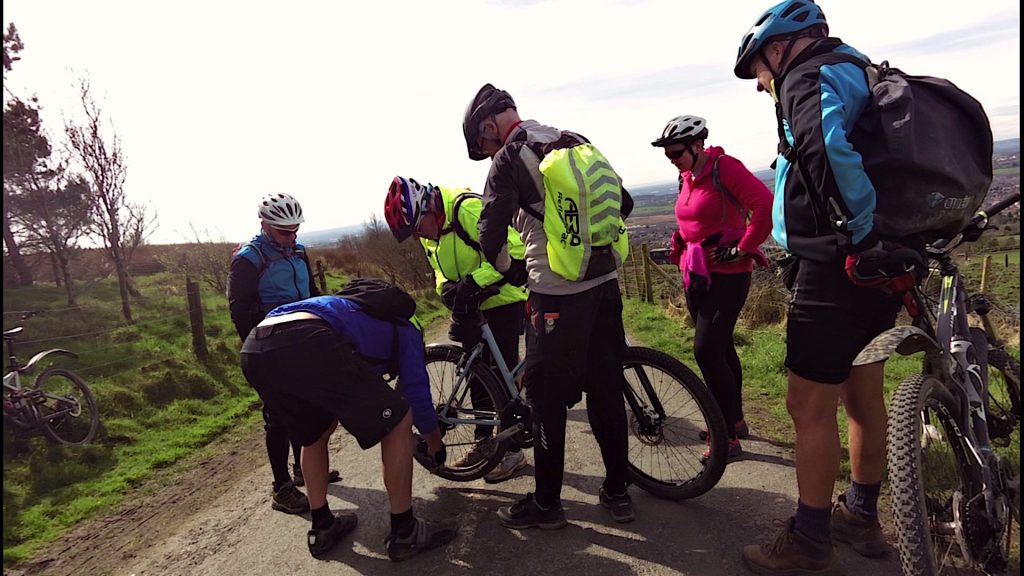 How many cyclists does it take to not mend a damaged rear mech? 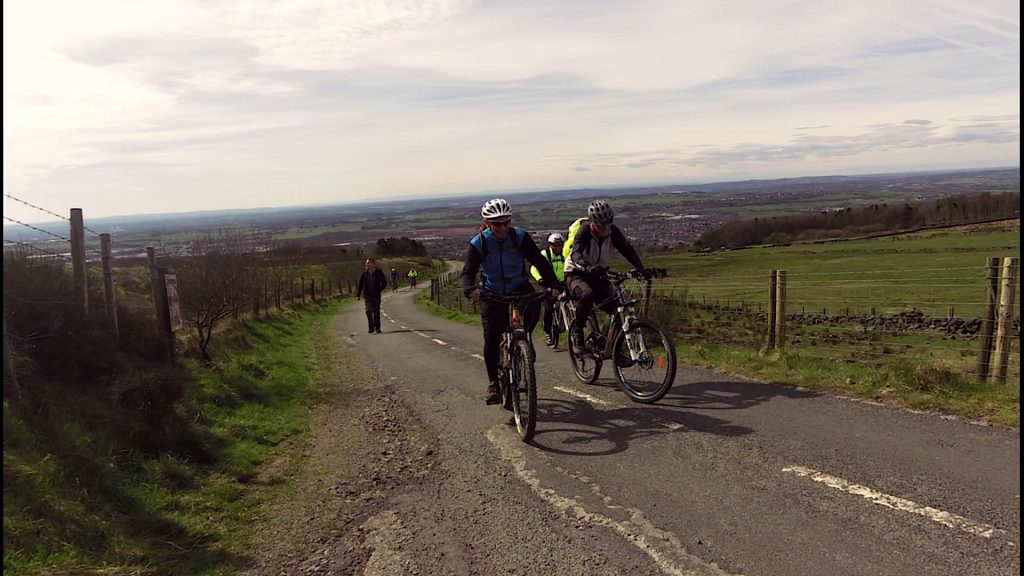 Careful lad’s, theres a walker trying to get past! 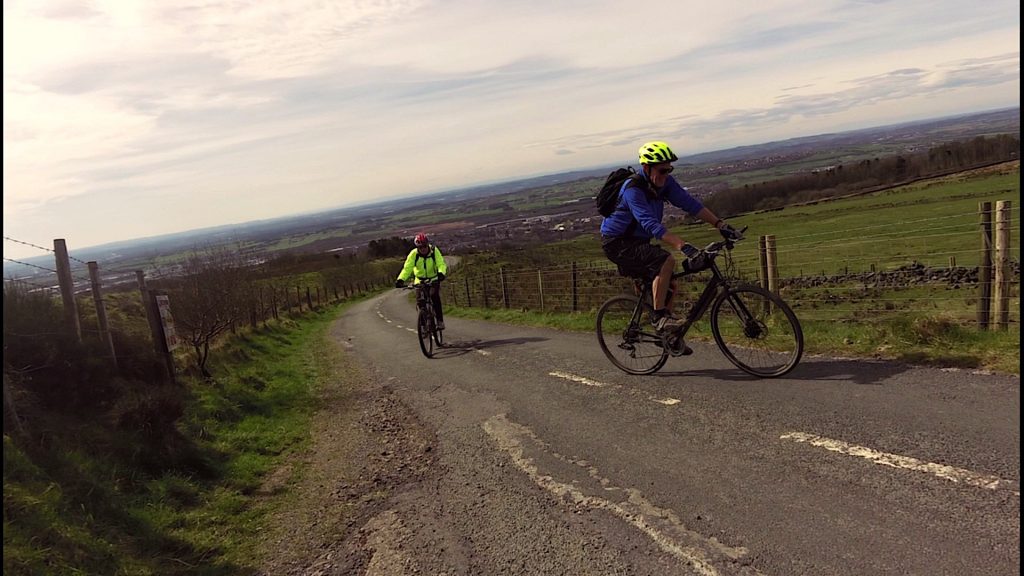 Have these two had a pint along the way? 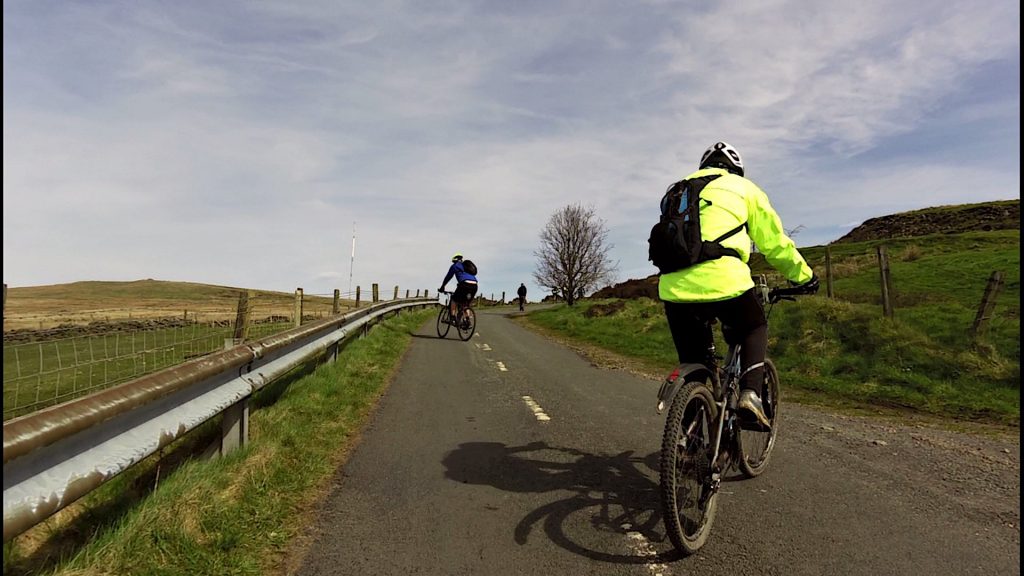 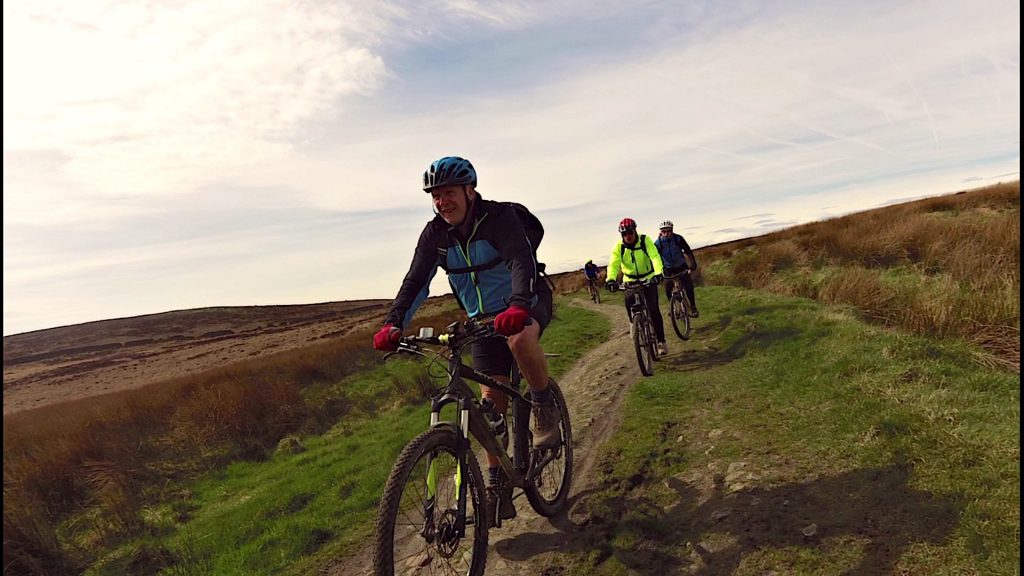 Those red gloves just don’t match the rest of your ensemble Alan! 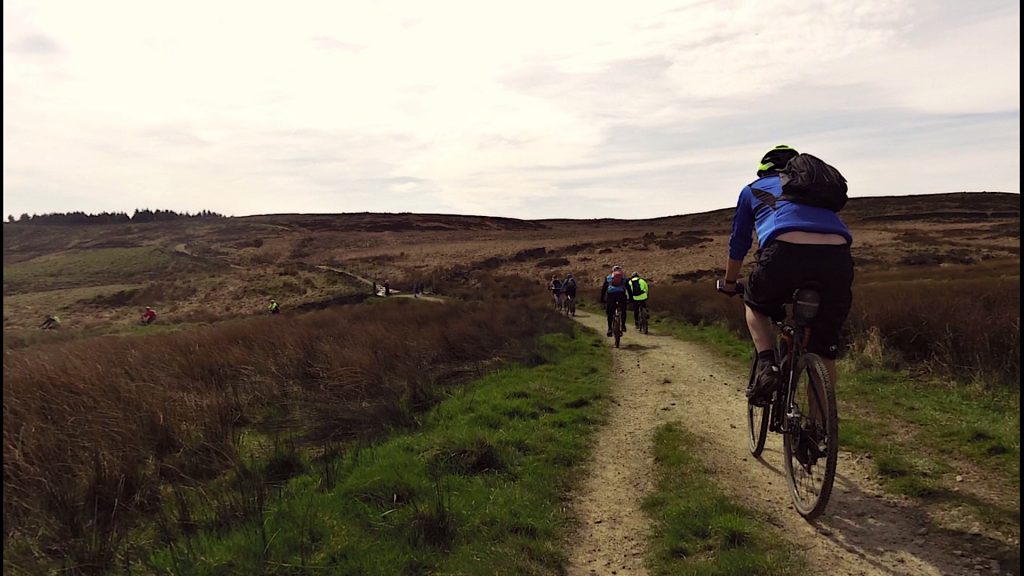 Did your Mother never tell you to “tuck your vest in, you’ll get a bad back” 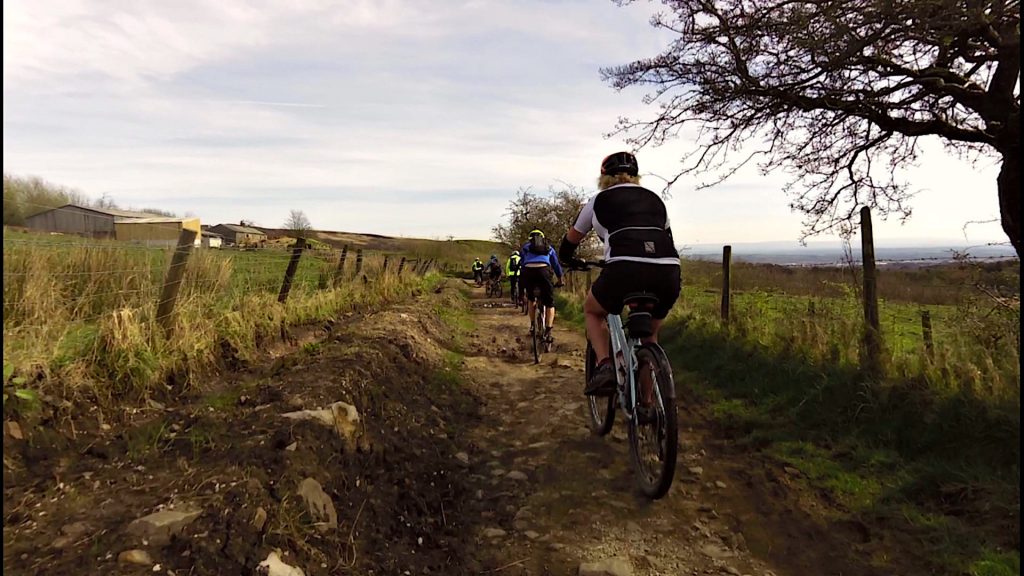 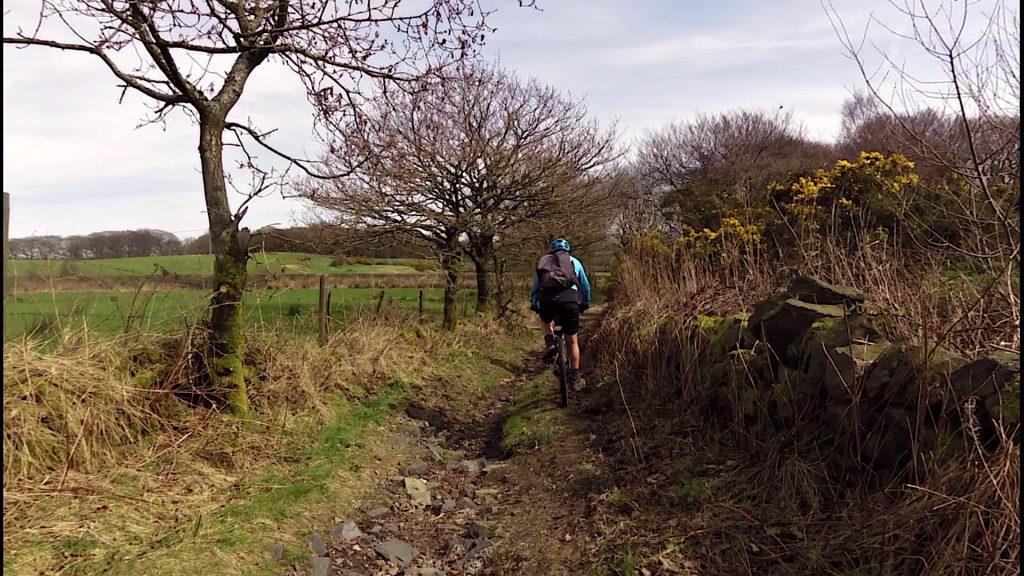 You can keep your roads, this is the real deal. 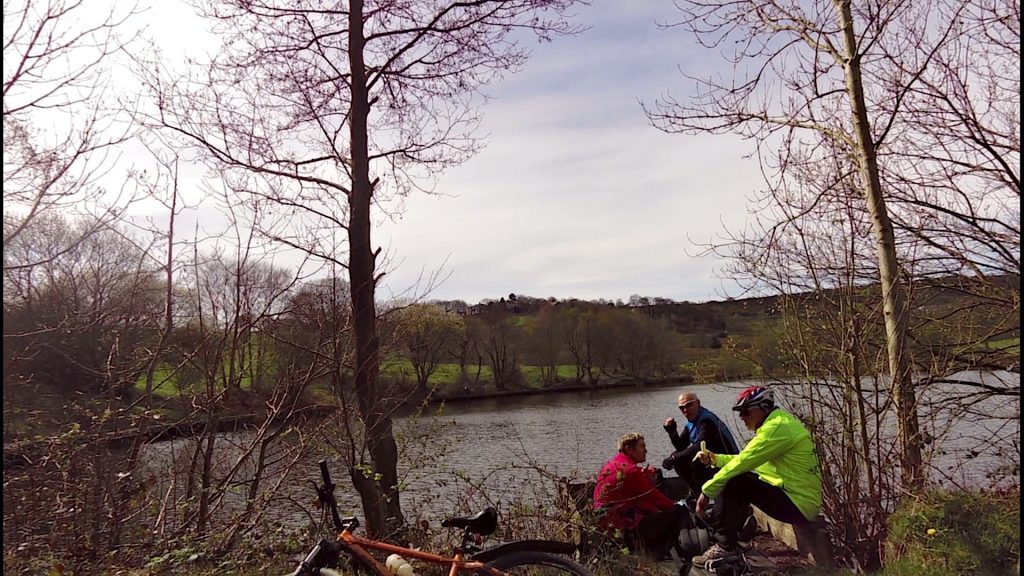 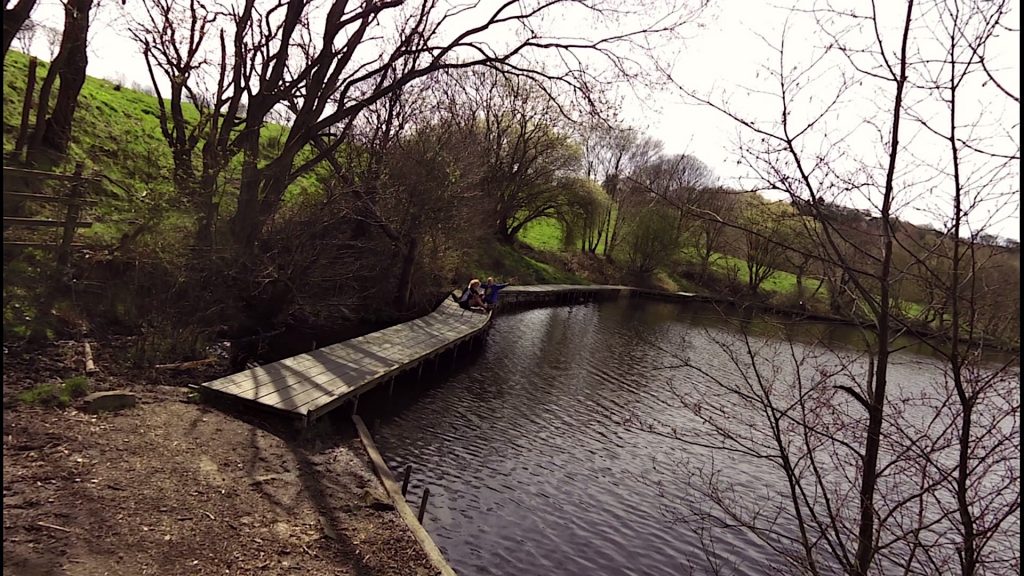 We just wanted to be alone! 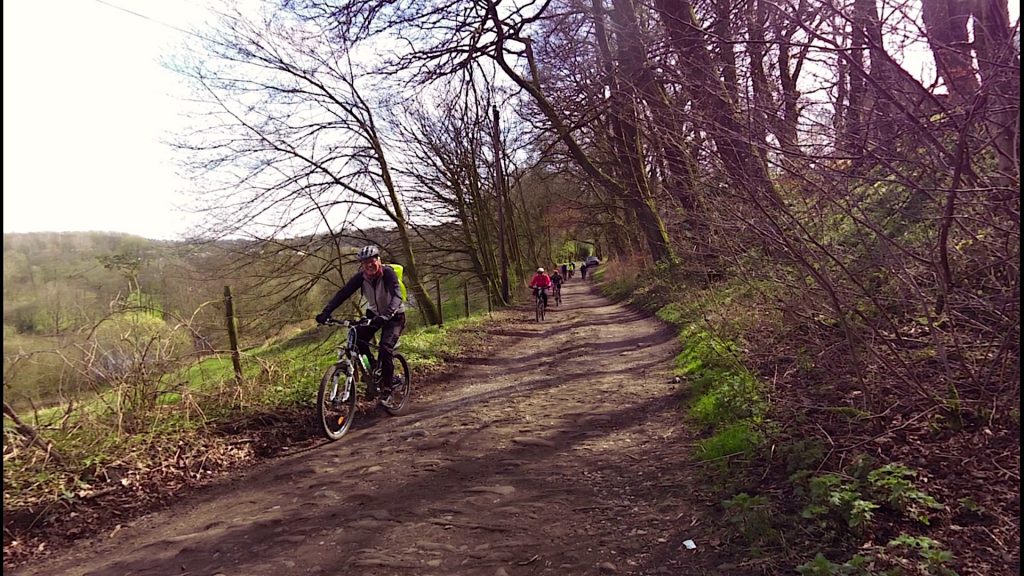 They’re still following you Jim, despite what you’ve put them through! 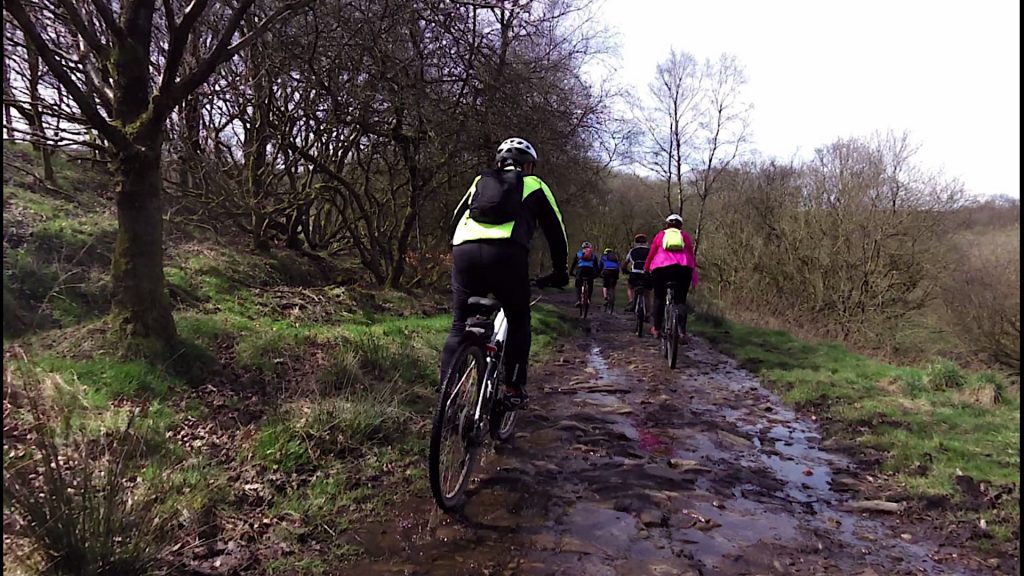 It just gets better & better! 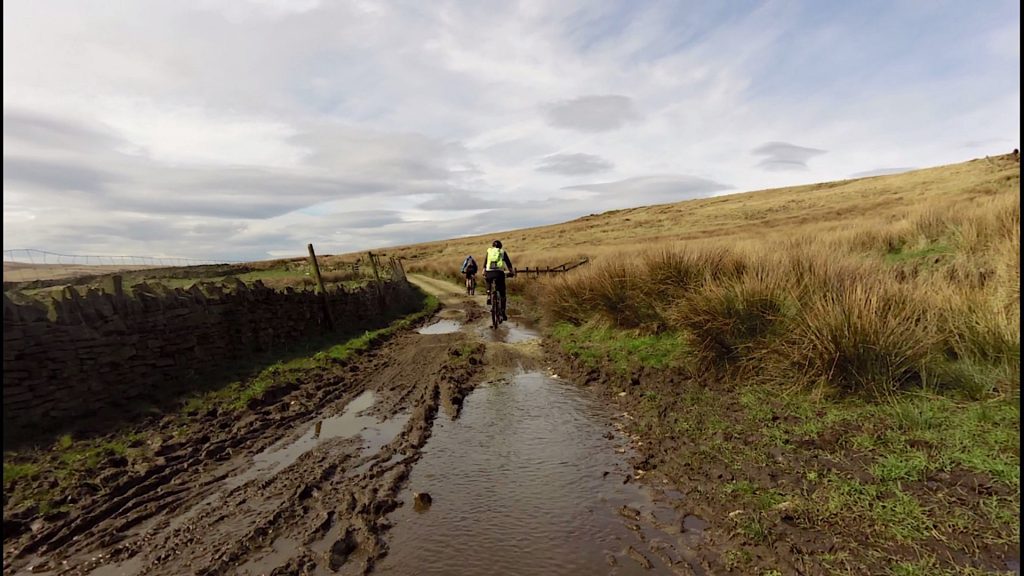 Anthony would have loved this! 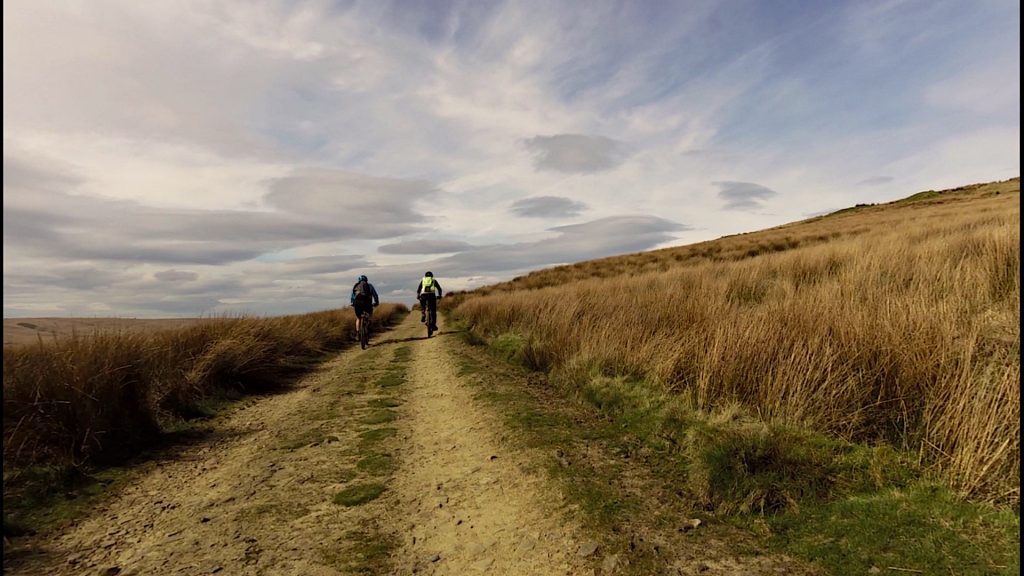 “Were on the road to nowhere” Another bonus point up for grabs! 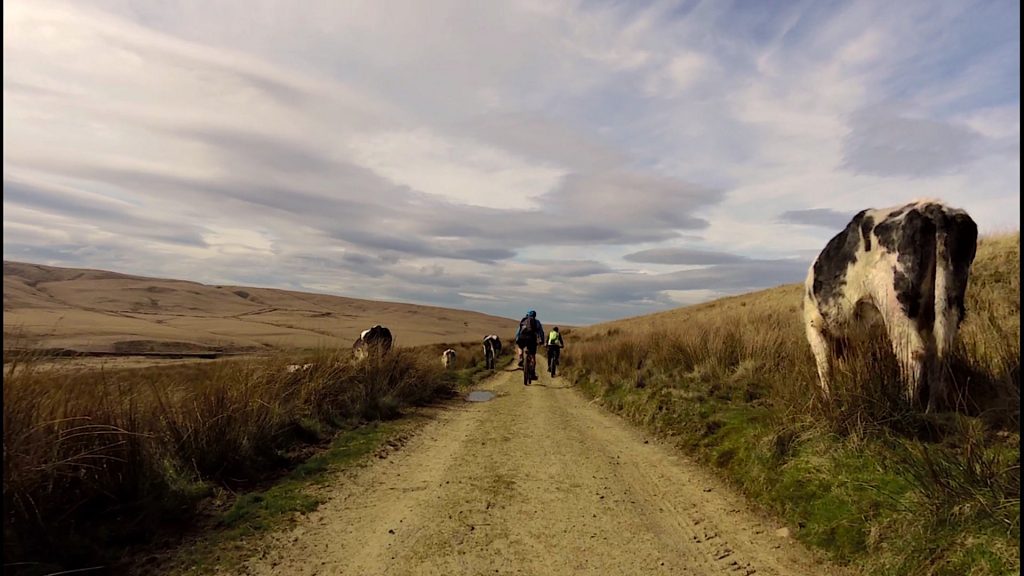 Down to five and only the cows for company!