Fourteen booking for this notorious ride resulted in twelve riders making the start line, one late cancelation and one of the two potential new members unaccounted for (could have been put off by the unpredictable weather – maybe next time then). So here we go again, this ride started with twelve riders and finished we with three….

I arrived at what I thought was early 09:25 only to find two riders sheltering under a tree, new member Tom being kept company by Richie. Next to arrive was Harold soon followed by Caroline who hijacked Harold for a quick spot of bicycle maintenance, utilising the car park fencing as a bike stand. It wasn’t long before the full complement of riders was made up with the remainder of the group appearing from all directions as no one else had driven to the start.

We had a camera for the ride but radios were absent. As it was a fairly small group we deemed the lack of radios not to be a problem. First role to assign, who will be the camera person, no surprise here, it was Richie, not sure if it is Richie jumping in before anyone else can, or Richie taking it because no one else will.

In an attempt to get in an on the ride training session with the Garmin I had email the route for the ride to attendees, a quick check and only Len had the route on his Garmin. Move on. An overview route to the tea rooms was given and the adjustments to the Garmin route provided was explained, a couple of diversions identified and the option of three exits from the old railway line from Worsley to Walkden (remember for later).

As the ride starts from the bottom end of the Flash the route provides for a visit to the facilities first, when asked if they were needed most had visited on the way in, however, those who had been waiting at the start did want to use them. After a short stop we continued to follow the guidance from the Garmin (well I did), which from the front spot seemed as if I was on my own as I had to keep looking over my shoulder to make sure they were still there (never been on a ride so quiet – was this because of past events on this ride – or is it because on the IHL rides we have so much noise we have become immune to normal cycle chatter – whatever, normality was soon resumed).

The ride out along the canal was uneventful, as we left the canal for the detour through the farm yard there were a few comments about how bad it was going to be, Anthony took no notice and the track was dry if a little overgrown. We managed to cross the A580 fairly quickly as we had the benefit of a vehicle slowing to give us priority, well, got us half way across, as the west bound traffic was not as considerate, a little concerning for those of us in the middle as a vehicle in the near side lane was being overtaken when it had its right-hand indicator on (obviously had forgotten to turn it off – good job we are psychic and new that). How nice is the East Lancs cycle way, you only really appreciate it when we leave to re-join the canal over what is in sections a rough brick road, at least it was dry. No crossing the bridge with a hairpin turn this time around as the road is closed to “Through Traffic”. Instead of the nicely resurfaced canal tow path we get to use the opposite side of the canal, being from Wigan this is still better than some of the stretches we are familiar with. At the next bridge we got to cross over to the good side. At this point I decided to take a short break and Enid took the lead as it is just to continue along the canal to Worsley. Fully recovered I continued in an attempt to catch up the group, after a few sprints and breaks the group come into view, on passing through the group I suggested we tell Enid that as she has led for a couple of miles the route should become hers, the general response was – No she goes to fast. I manage to get back to the front just in time, only by telling Enid to take a right two turns early, not to worry Harold went with her.

Leaving the canal behind at Monton it was time for the old railway line up to Little Hulton, yes, it is a bit of a climb, but only a bit. Some still think it is a lot, we started off at a slow but steady pace and the group was very well together so we upped the pace a little and from the front we seemed to get all the way up without any problems. No doubt if there were any problems they will appear in the comments. As we were approaching our exit points I was in a discussion with Doreen and noticed that Garmin was saying off course, a quick look at the map display and yes, we had passed the mapped exit, this also meant that I had passed the pre-ride exit which was even earlier, however I had not yet reached the original exit from my first ride on this route with Harold, a quick shout to Harold confirmed the original exit was the next left. And no surprise Harold came up with – we could ignore this exit and take another a little further up (remember for later).

We now had a couple of miles of road riding to reach the Tea Rooms at Damhouse for our lunch break, Harold and Caroline were due to leave the ride here due to other commitments and Harold sprinted ahead. We eventually caught and passed Harold and made our way to the Tea Rooms. A quick head count and Caroline had decided to stay with the ride and Harold had left alone (was he off to the street velodrome?) Tables had been reserved inside but as the weather was not too bad the majority decided to refuel outside. There was a comment about only getting lost once to reach this point in the ride, but this was countered with a reference to the pre-ride briefing about the number of exits available from the old railway line (see earlier), which brought another comment about the briefings being done for a reason and to be listened to.

Keith and Mark refuelled inside so the others would not know how much fuel we took on. Richie was also due to leave the ride and was going to continue to Manchester Road then depart. Richie was ready to leave but Mark was still refuelling so he handed over the camera and departed.

Just before the off a quick camera battery replacement was the order of the day. The replacement battery was dead, a good job there was another. Camera rear mounted (sorry about the mudguard but didn’t have long enough to check alignment) and we were off again.

The ride back to Pennington Flash is a mixture of a little road, off road trails and wild adventure (almost out of Africa) from previous comments. Although I don’t think we can now call this “The shadiest ride ever” I might have spelt that wrong Roy. Yes, some of the trails were a little overgrown, and precautions were taken for the short section that was un-rideable and everyone was advised as to the safest way to pass through this section although not everyone knew their left from their right. Due to some low and very low branches abdominals were exercised as nobody seemed to want to get off and walk. Approaching Bickershaw discussions started among the riders as to which way home they were going to take, Keith was all for Platt Bridge Canal and Home, Jim H (earlier in the ride comment – I know where we are now you can get to Wigan off road without using the canal form here) proposed going through Low Hall or…, at which point he was cut short with – I know your little detour home, which results in 20 miles later after ice cream at Southport.

We decided to head for the main road and decide there. Keith headed for Platt Bridge and Home, Jim H was going to set off in the same direction but veer off towards the prison with Doreen until Enid killed their plans with “No – I am going to finish the ride”. This left them with no other option than to continue the ride, as they could not bear Enid having the trump card off “do you remember that ride you balled out of”.

A big plus was the condition of the paths around Firs Flashes, no more mud and lots of fine gravel filling in the paths. Expect to see these on a regular basis on Jim H rides.

On returning to Plank Lane Jim again tried to change the route home by suggesting Crankwood to dover lock but Enid was having none of it. Caroline continued home at Plank Lane and Jim H, Enid, Doreen and Len headed off to the canal towards Wigan, leaving Tom, Anthony and Mark to finish back where we started at 14:40. 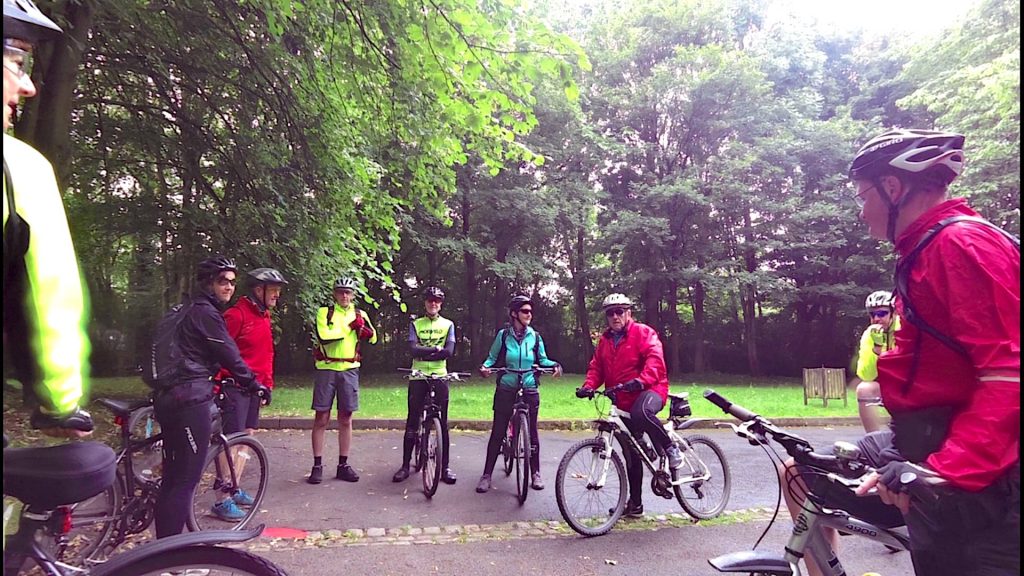 Bit of a damp start but not a bad turnout! 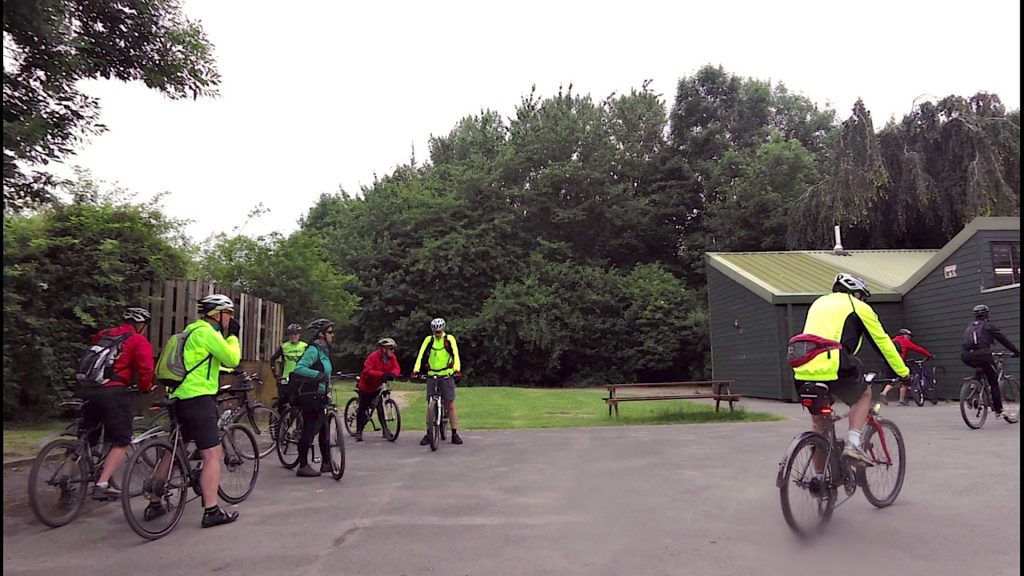 Half a mile in and we’ve already stopped for a pee! 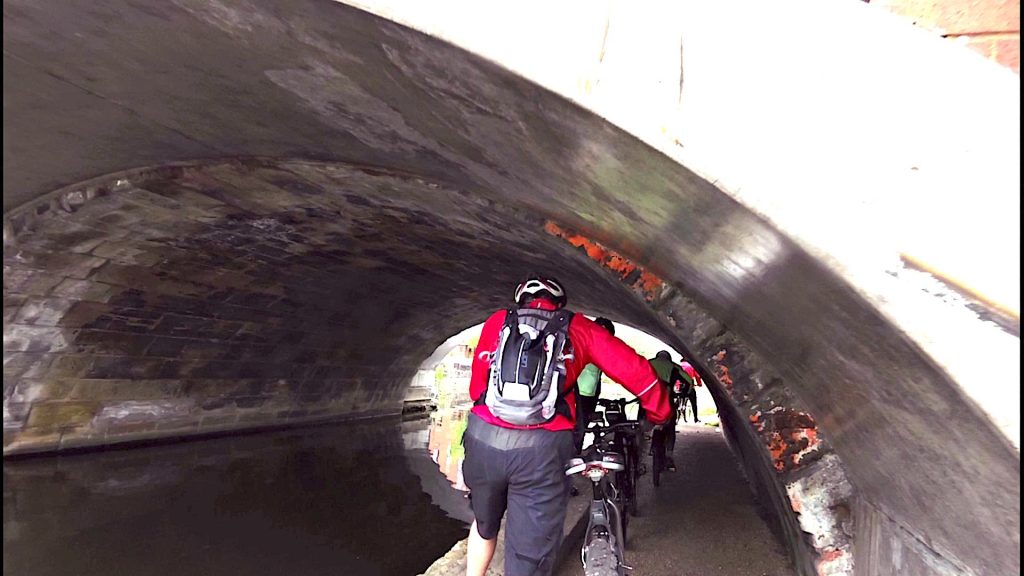 Safety first, never walked under there personally, never needed to! 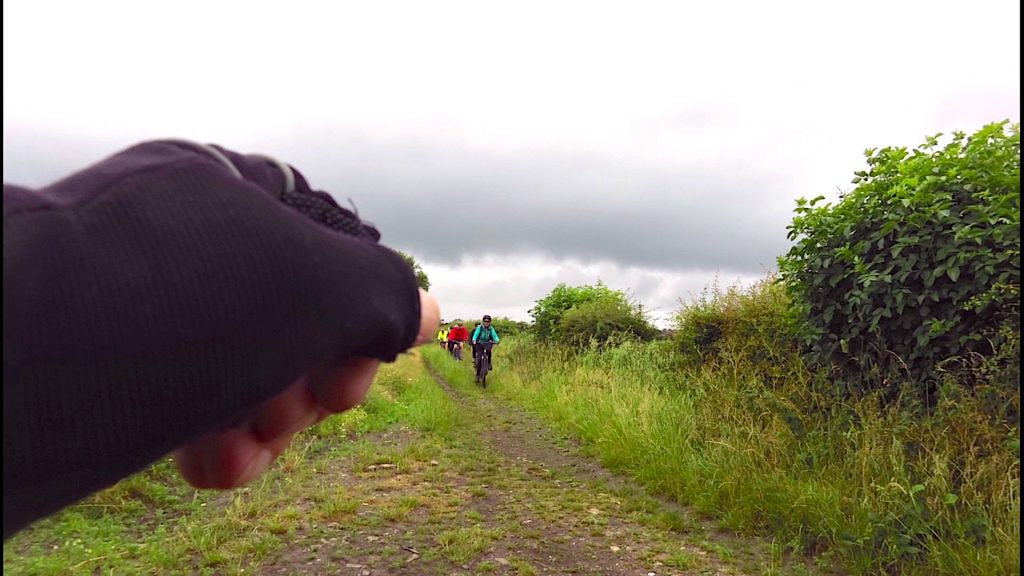 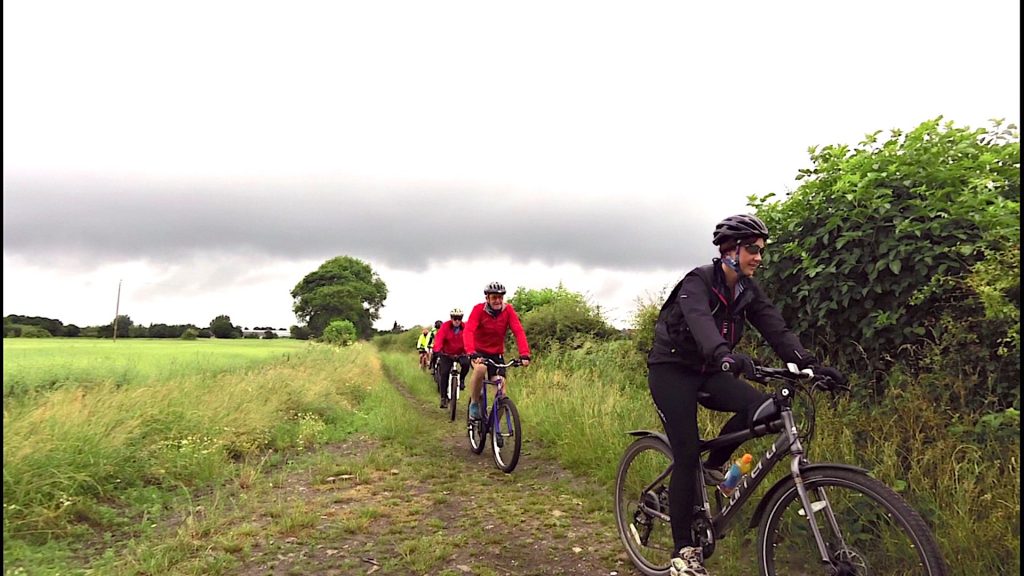 Nice to see the Hampson’s out with us again! 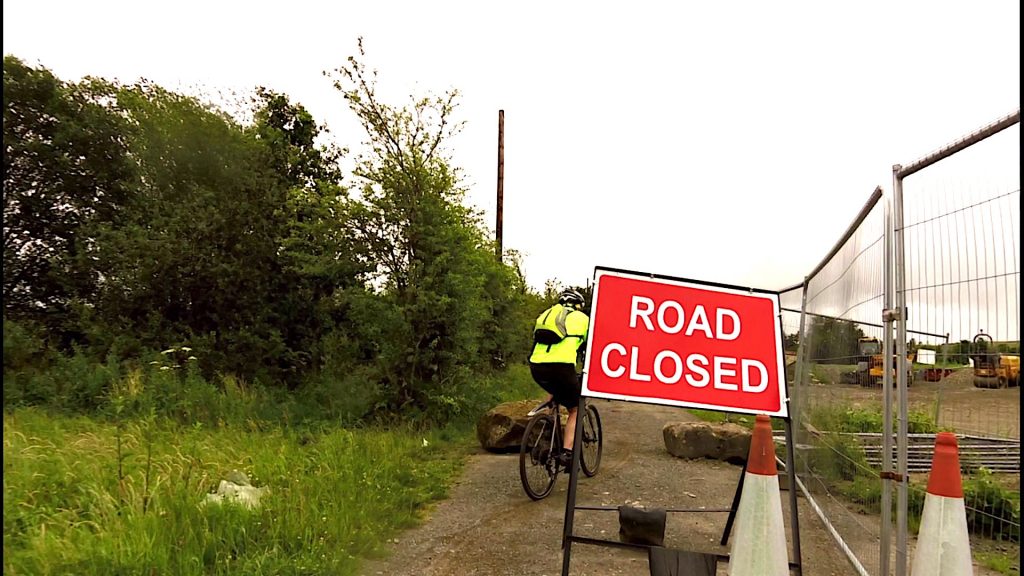 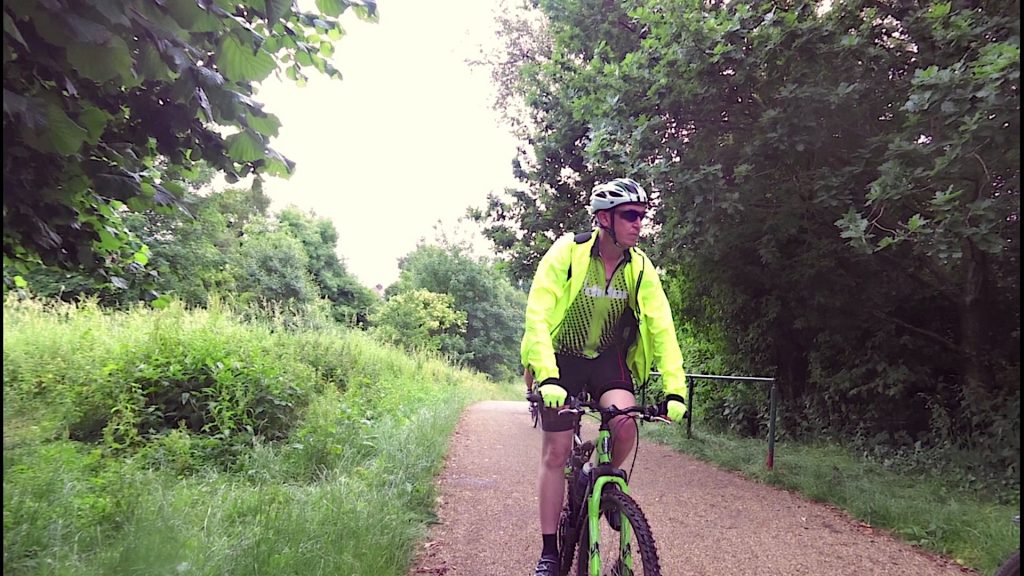 Welome to the club Tom! 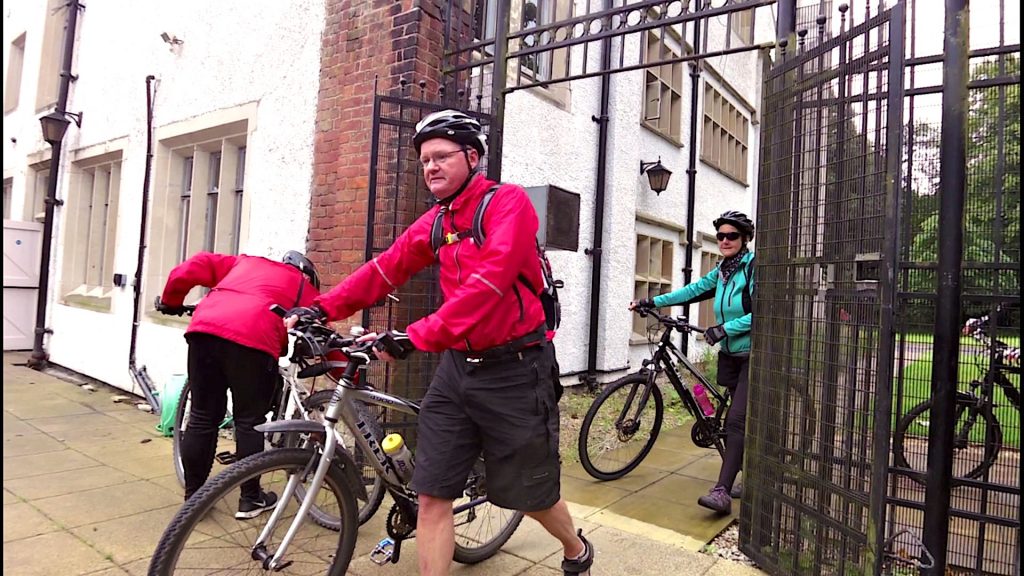 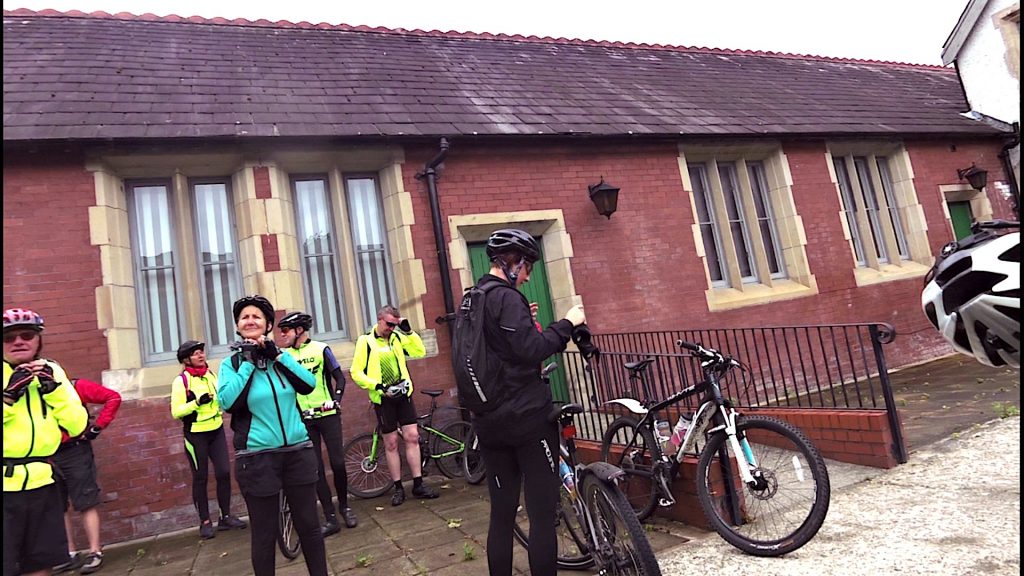 Cheeky grin there from Enid, or is she just undoing the chin strap?

Go for it Len we’ve got plenty plasters! 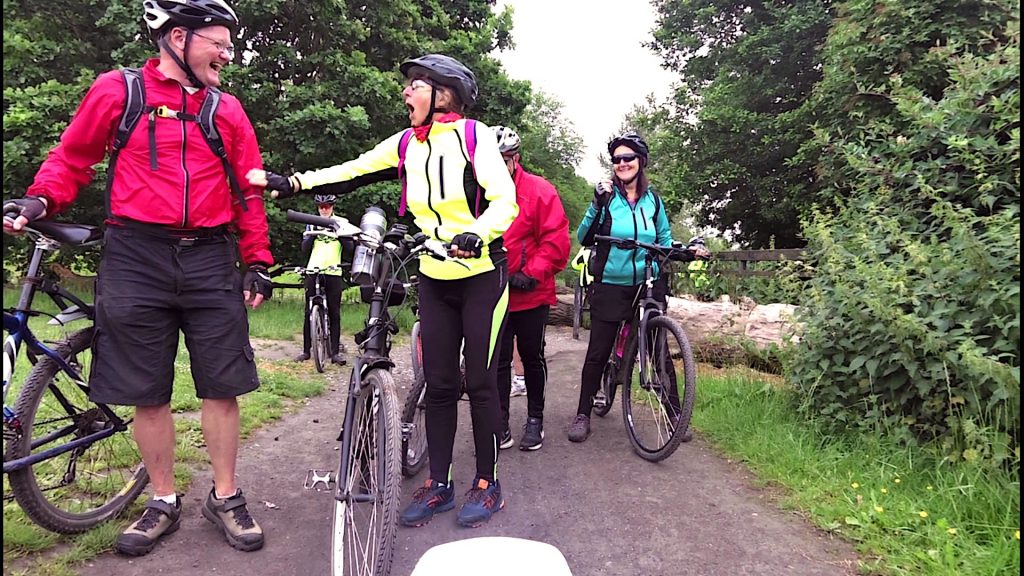 Doreen’s just been made aware of something! Wonder what? 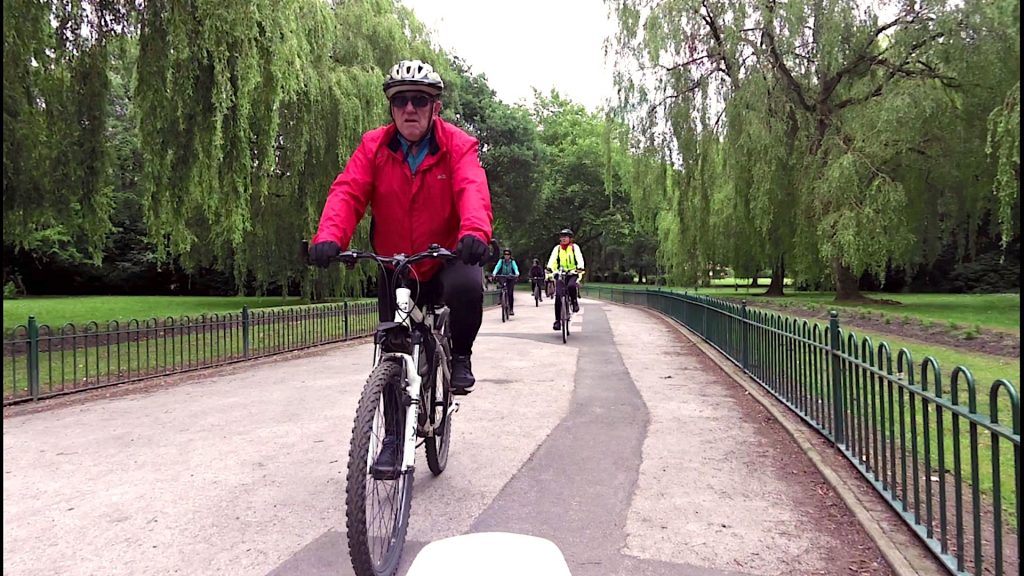 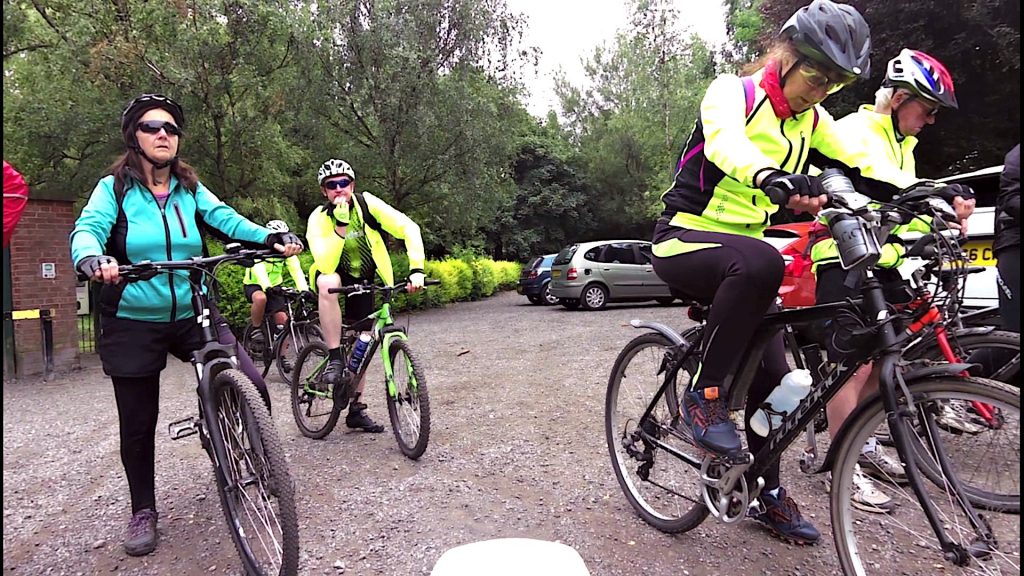 Tom’s taking it all in and thinking what the hell am I doing here! 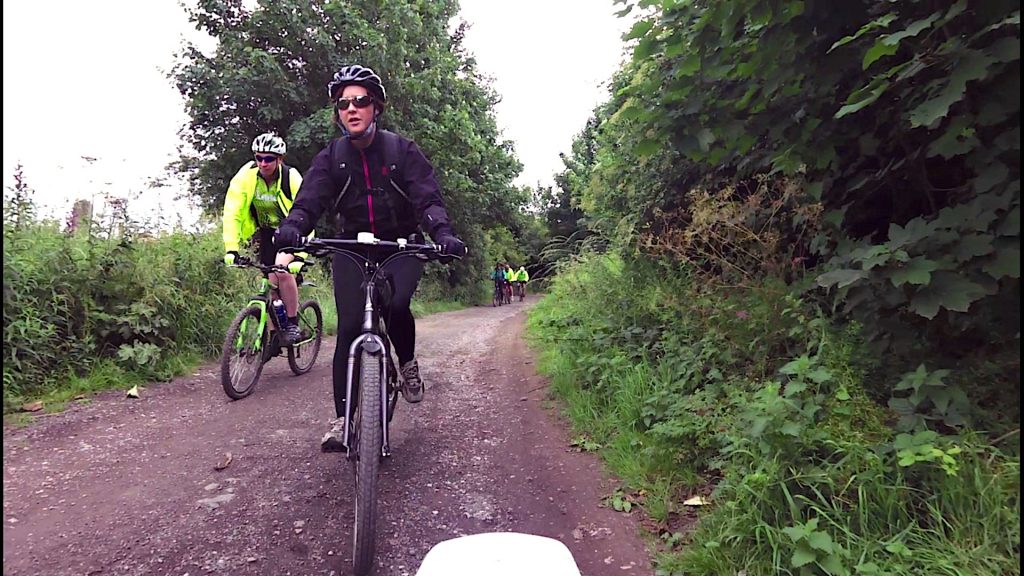 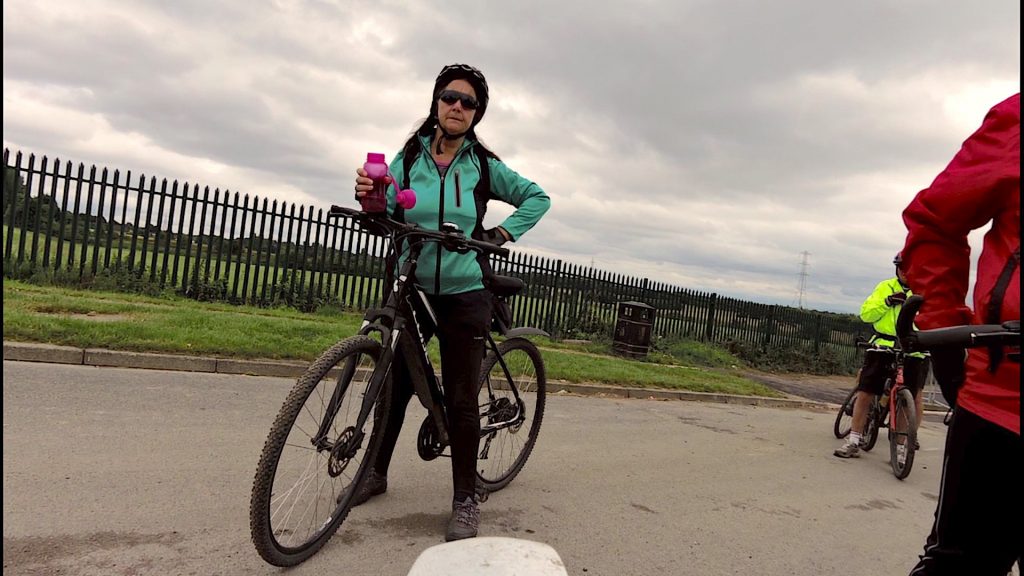 Just don’t, you will come worst off! 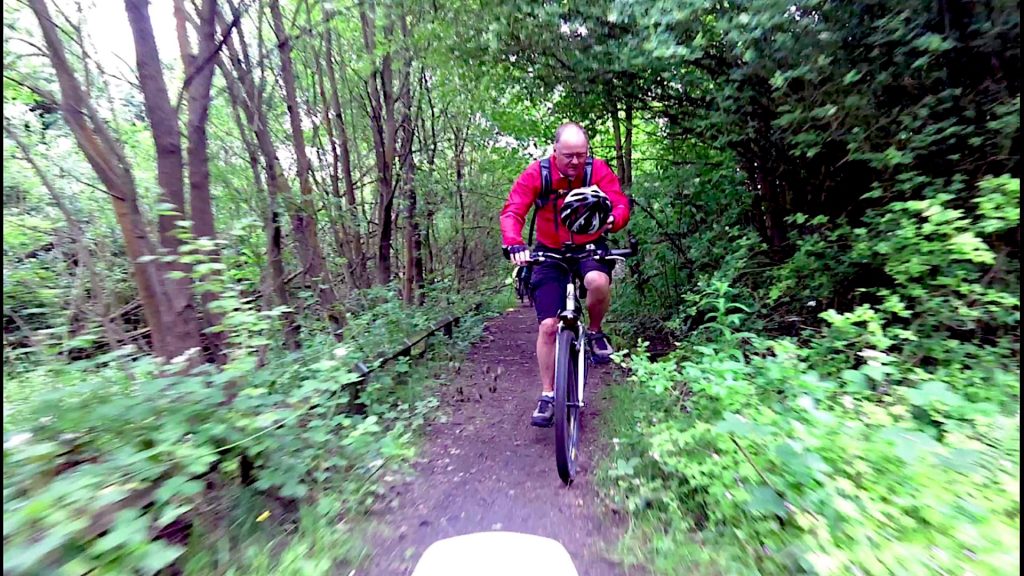 Oh no, his hair has come off with the helmet! 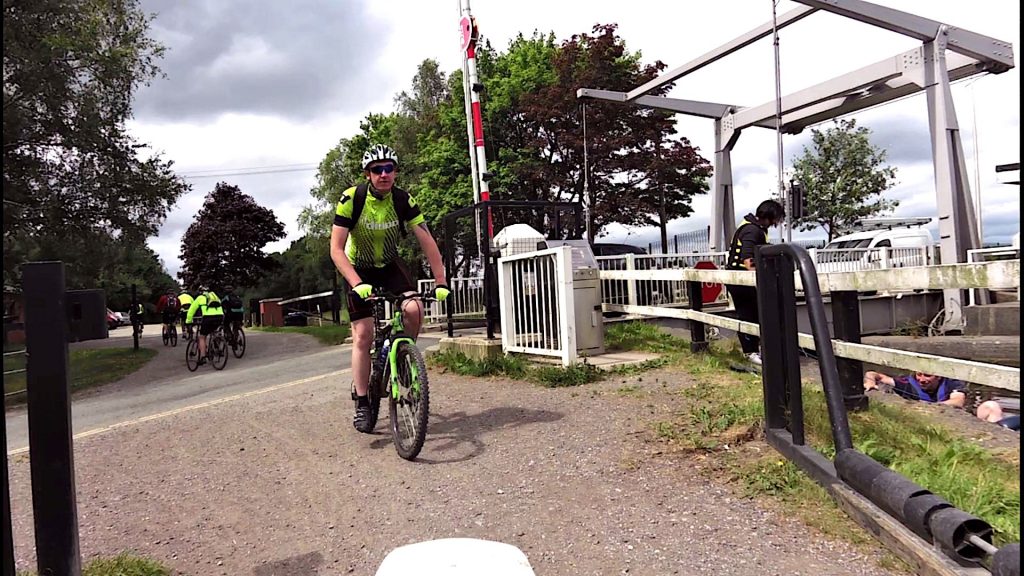 The parting of the ways! 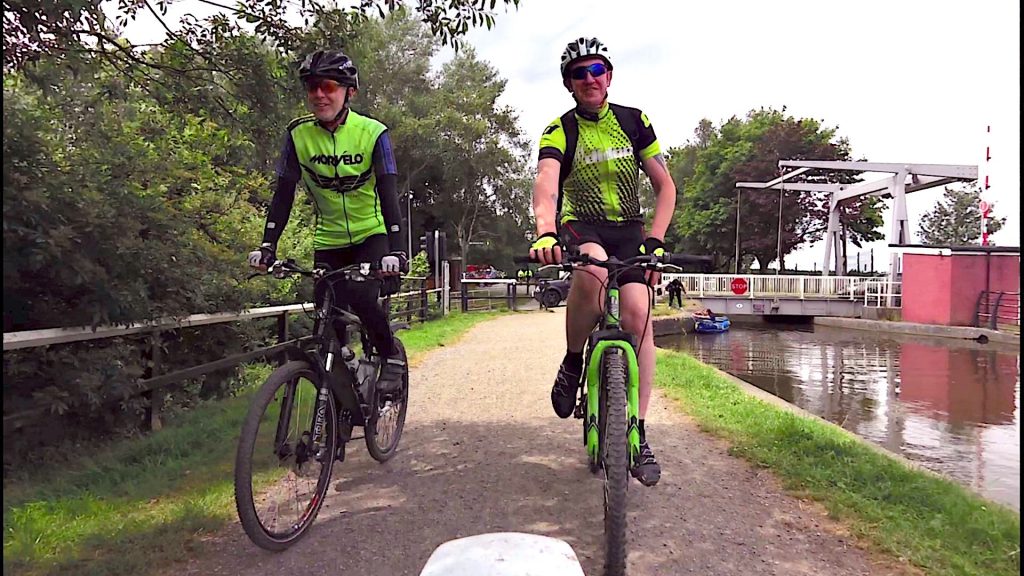 And then there were three, well two and part of a mudguard!