This ride turned out to be like the Grand National but without the fences. We started out with 24 riders and ended with just 10. As they say in the racing fraternity, it was heavy going and this is roughly how the story goes.

Jim H gave us a quick overview of the ride as we gathered at Trencherfield Mill and advised everyone to carry out a quick M-check on their bikes before we set off. That didn’t exactly make a difference for one or two members of the group! Ray waved off his beloved Joyce and John S decided not to join us but to head out to Pennington Flash to do a bit of twitching (bird watching – just in case anyone gets the wrong idea).

Jim H, as we may have expected, chose to take us on a meandering route out of Wigan to join the A49 at the cemetery gates near the Boars Head. We collected Doreen en-route then soon afterwards suffered our first mechanical hold up when Carole’s chain came off. Our mechanics at the rear of the group resolved the problem but had lost sight of the main group and took a wrong turn to head up the A49. Phil 1 and Alan G who had been waiting patiently for them found out and so followed the main group’s route to arrive at the cemetery gates just in time to meet the group heading up the A49. Liz joined us there and so the group set off in unison.

We followed the A49 through Standish, Coppull and on to Charnock Richard. The lead group were rattling along at this stage whilst the back markers trailed way behind as they were held up by traffic lights and Carole’s chain which was slipping regularly on the inclines. Efforts to contact Jim H on the walkie talkies were to no avail but when we regrouped outside the Hunters Lodge motel we discovered the reason. Jim’s walkie talkie was on a different channel to the other three!

We continued on through Euxton and Bamber Bridge before joining the Guild Wheel route alongside the River Ribble. It was good to leave the A49 behind us and enjoy some traffic free cycling. It wasn’t too long, however, before we hit another problem. Tony M had a puncture so we had a short break while a spare inner tube was fitted. The cause of the puncture was a bit unusual – a staple in the tyre. We edged our way through Preston and into the docks area where we had a loo stop at the local Morrisons. We then left Preston and entered pleasant country roads passing through Salwick and Treales on the way to Kirkham and our lunch stop. The local Morrisons again provided the location. Most of the group grabbed a bite to eat in the restaurant though a few others decided to have a play on a nearby playground instead.

Jim H led the group onto the return journey shortly after 2pm. We made slow but steady progress back as Carole was still having the occasional problem with her chain and Clive was also experiencing some problems with pain in his legs. We reached the outskirts of Preston around 3pm where we lost our first member. Jim T, who had a tennis match that evening, decided to bale out and catch the train back as he was concerned that we might be late back – he must have had a premonition! Soon afterwards Tony G lost his balance and hit the ground as we were negotiating a toucan crossing in Preston. Thankfully, he bounced back up with only his pride damaged, not sure about the Toucan though!

Clive continued along manfully until we reached Eccleston. We had stopped to take a quick look at Bradley Wiggins’ golden post box and Clive decided that he would take the direct route back rather than continue on the winding countryside route. Steve and Thelma agreed to escort him back taking the group down to 20. We had no sooner waved goodbye to them before we had another mini disaster that caused a considerable delay. Keith had been having problems with his rear brake pads and they jammed on the wheel rim damaging it to such an extent that he couldn’t continue the ride. He phoned his son to pick him up and told the group to carry on. The rest of us continued onwards with, thankfully, no further hold ups. We all negotiated cardiac hill and met up at the motorcycle shop at the top. Len, Denis, Tony M and Les decided to leave the group at this point and make their way home as the clock had reached 5pm. The rest of the group continued on to Wrightington where Keith gleefully overtook us in his son’s car wasting no time in telling us how much he was enjoying the car journey. We then entered Standish via Pepper Lane using the footpath to overtake a long queue of vehicles held up by temporary traffic lights. Tony G and Liz then left us at Bradley Lane and Alan and Tracy were next. They decided to continue onwards directly into Wigan when Jim H stopped to regroup in the centre of the village. Doreen then departed at the Cherry Gardens and Fran waved goodbye when we reached the canal close to Trencherfield Mill. The remaining riders finished the course just before 6pm having covered over 58 miles. Ray was waiting to provide Joyce’s taxi home and Tracy was clapping the straggling bunch of finishers over the line.

Despite the problems it had been an enjoyable ride and the weather had been kind to us. We may, however, have to give warning that long rides such as this that involve a large group could take much longer to complete than might be expected. 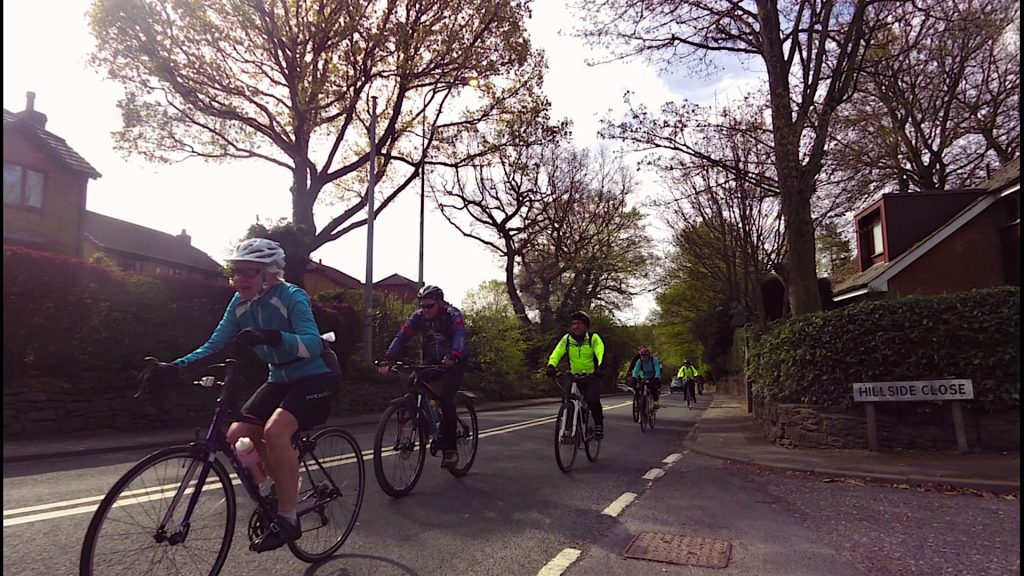 One handed uphill, just to make it more of a challenge was it Joyce? 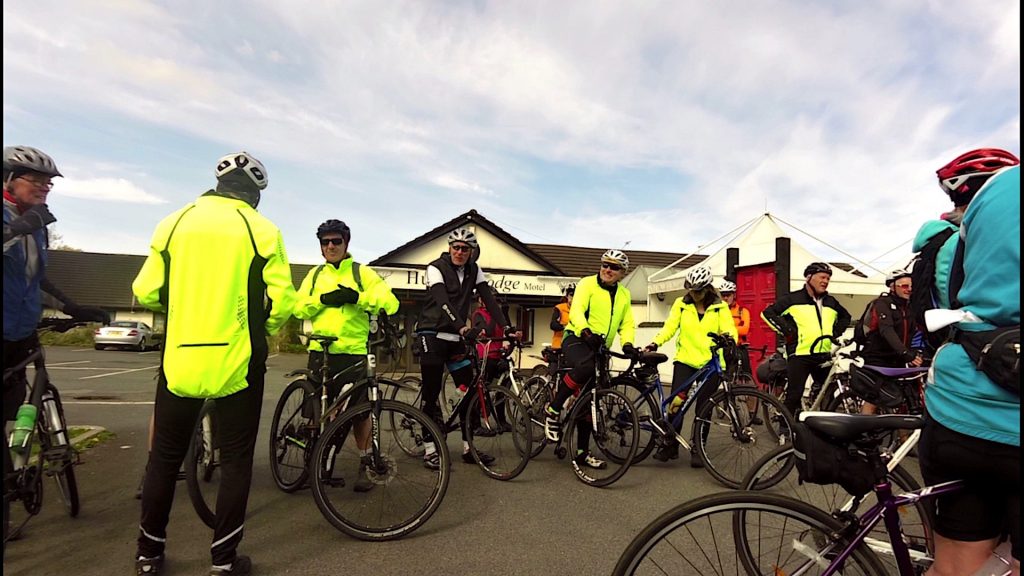 Quick re-group to synchronise the walkie talkies.  Coats & long trousers, whats up with you all? 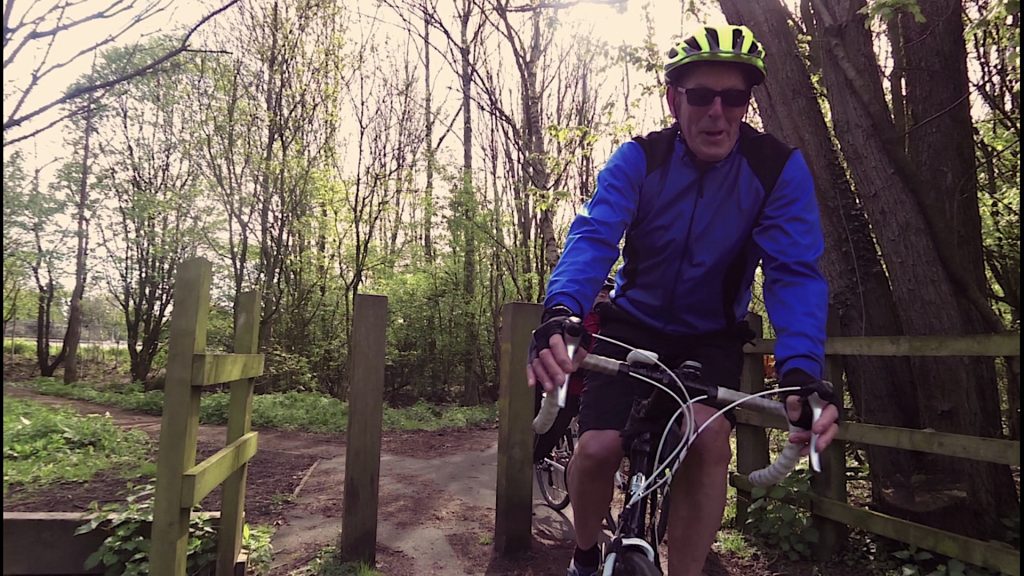 Nervy moment there was it Steve? 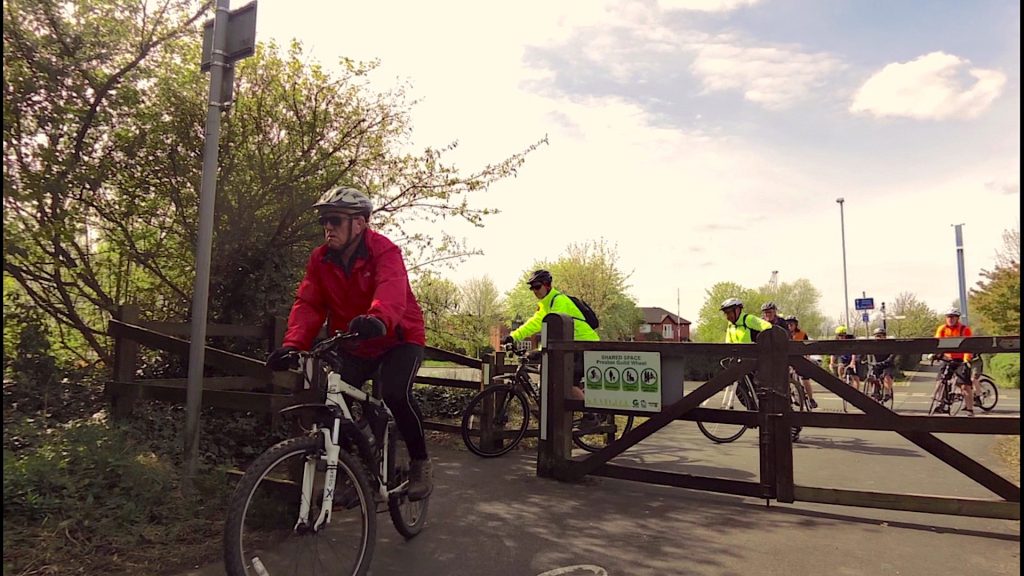 Despite the outward appearance, Keith is in fact enjoying himself! 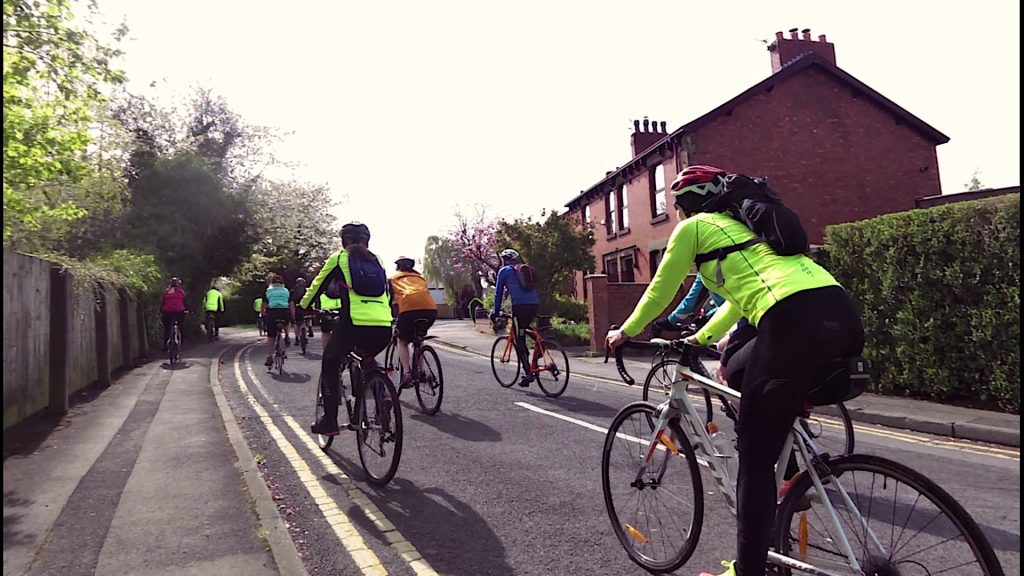 Coming to something when the roads aren’t wide enough and you have to use the pavement! 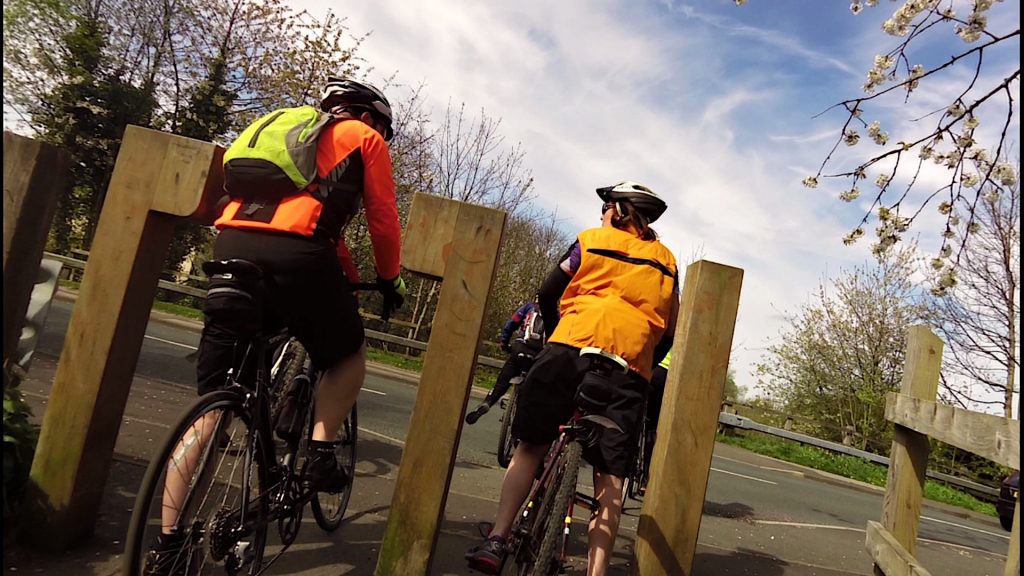 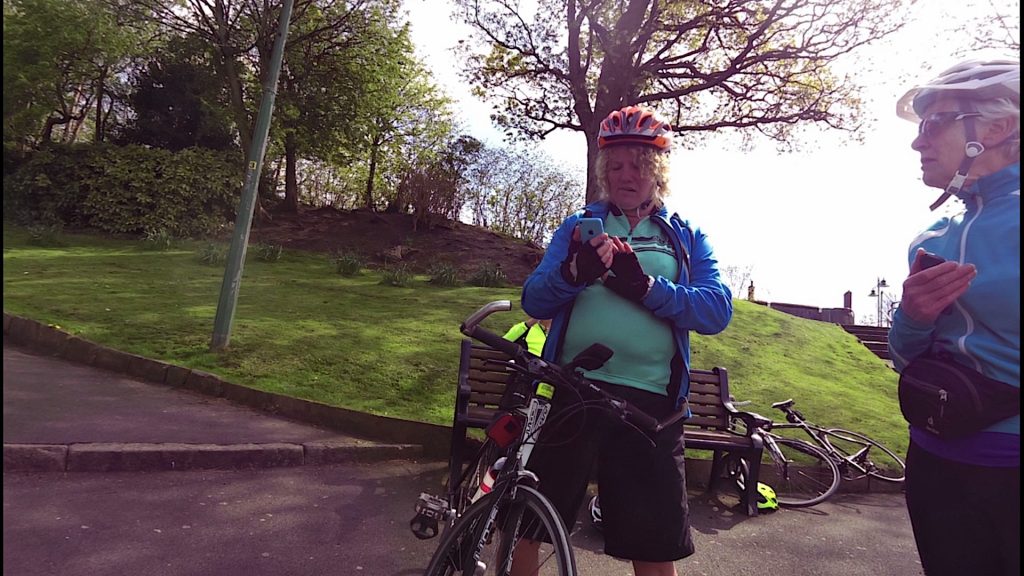 Look at these two, straight on Facebook. Worse than kids! 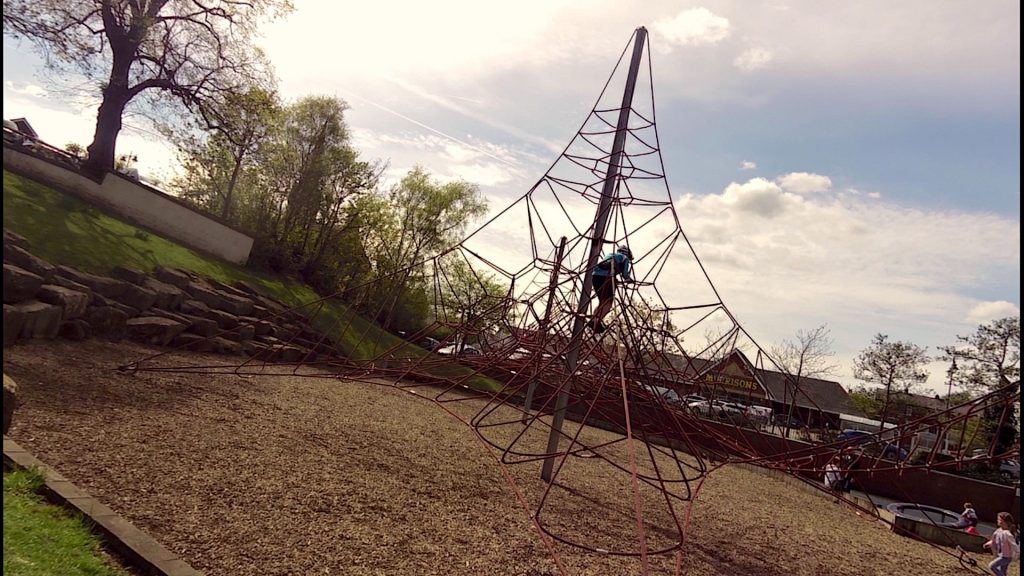 Talking of kids! Surprised Thelma & Tracy didn’t have a go. Probably in the pub though! 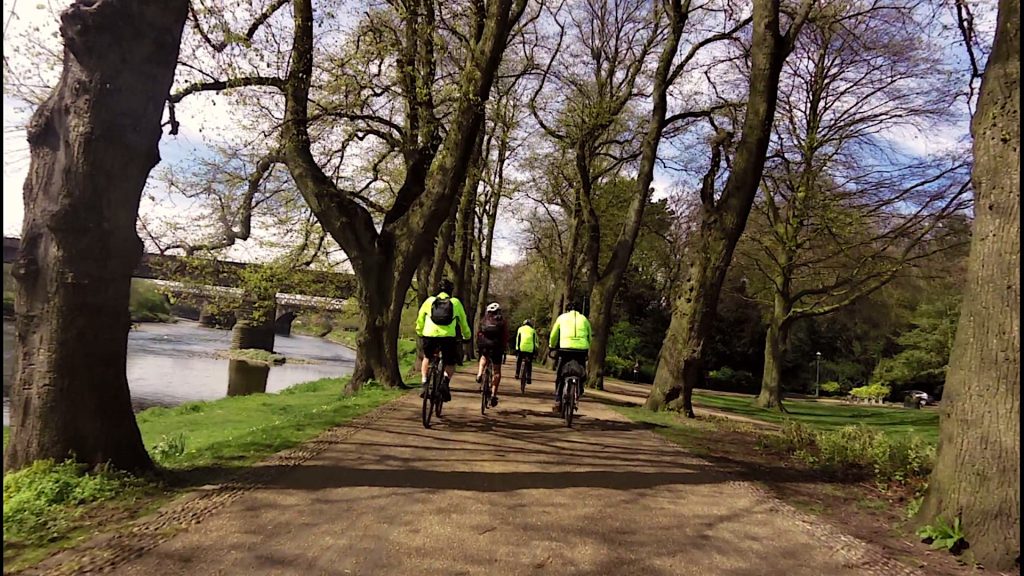 If this picture doesn’t inspire anyone to cycle, nothing will. 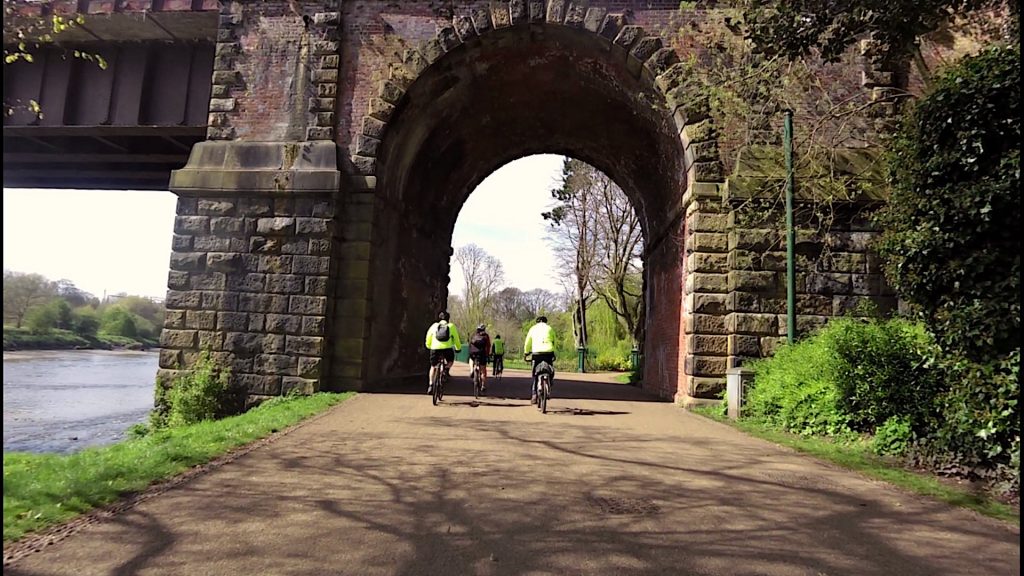 We just had to include the bridge! 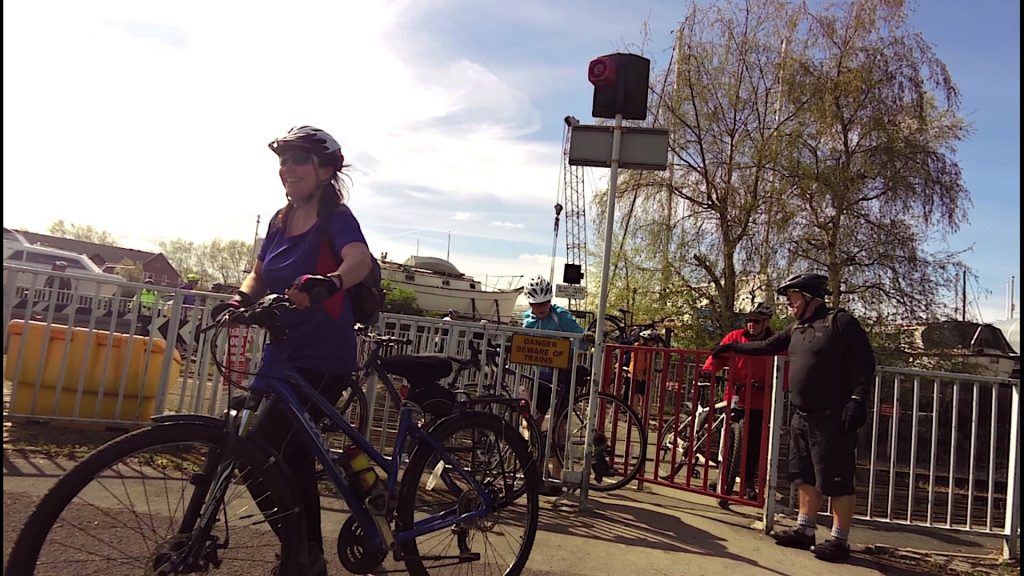 Cant quite tell how Liz is feeling, not as easy to read as Keith! 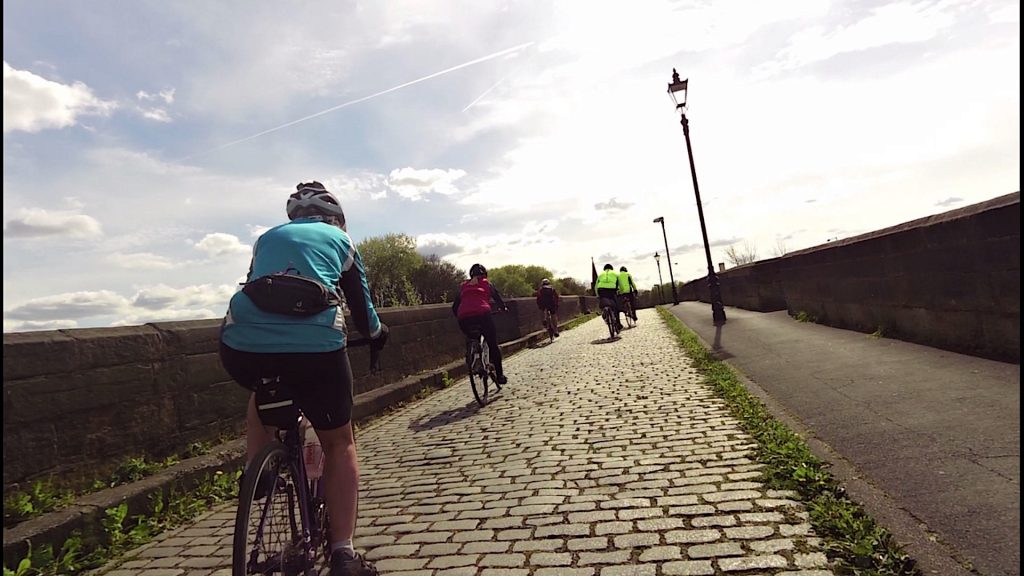 Tour-de-France section by any chance? 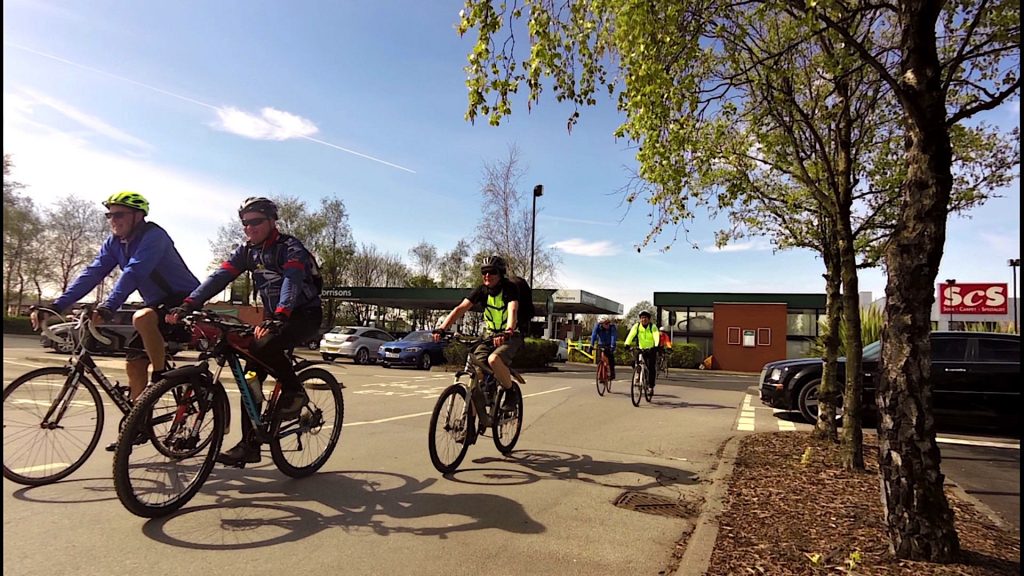 Picnic over and some shorts have appeared, heatwave!!! 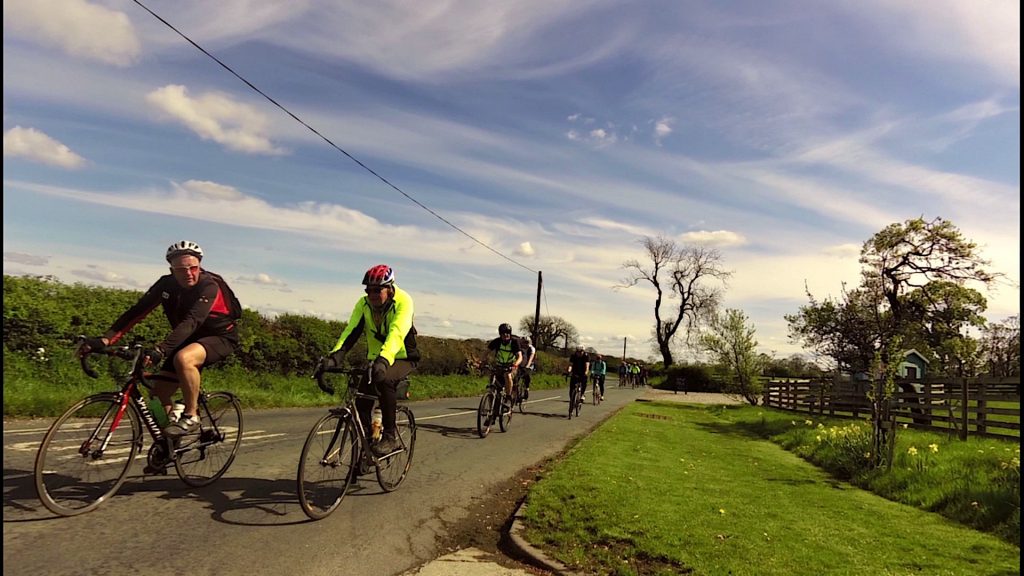 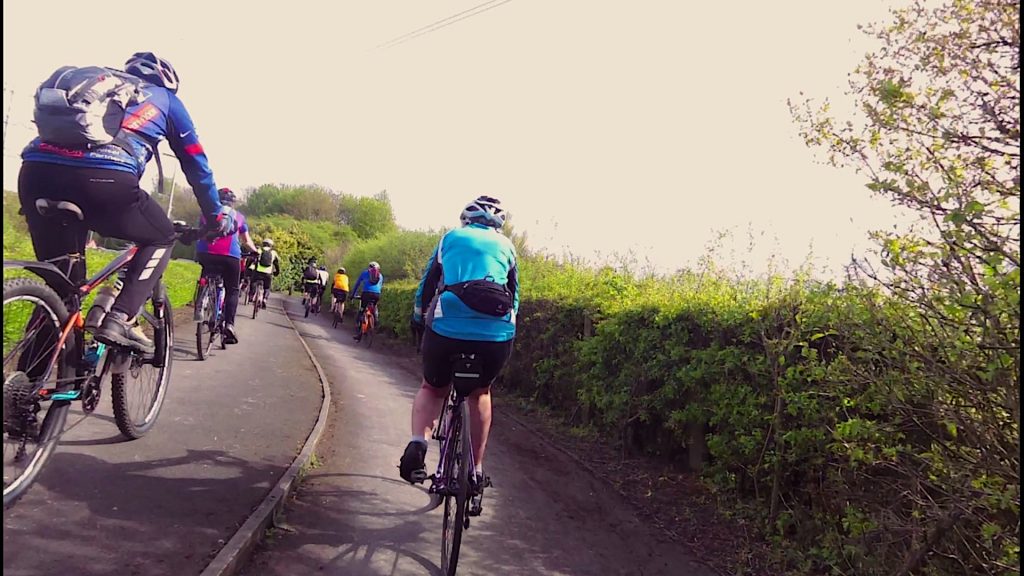 You take the high road & i’ll take the low road and i’ll be in Kirkham before ye! 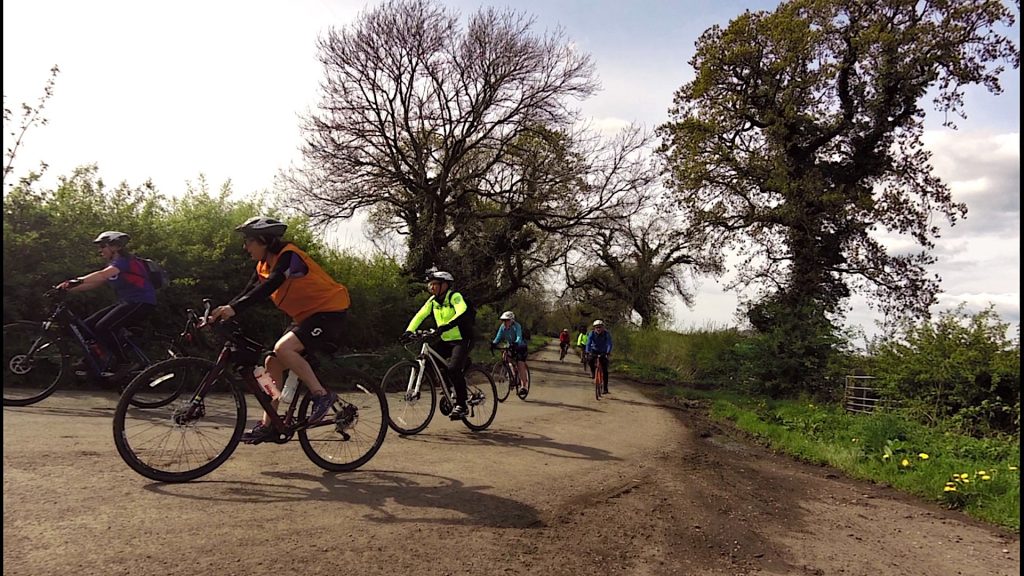 Jim H ride and that’s the only bit of mud we’ve seen, no doubt he’ll make up for it on the next one! 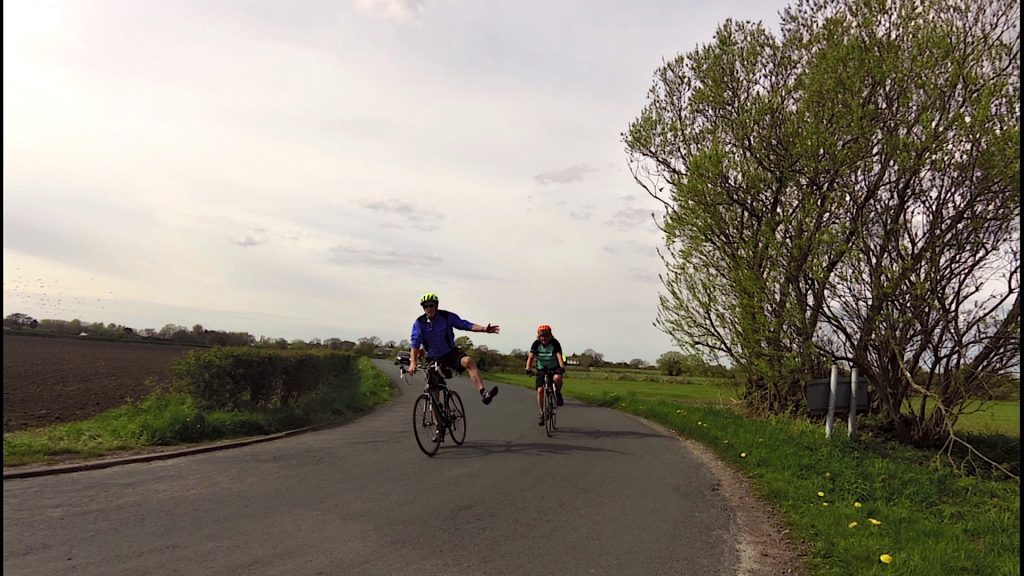 There’s always one and this time it isn’t Thelma! 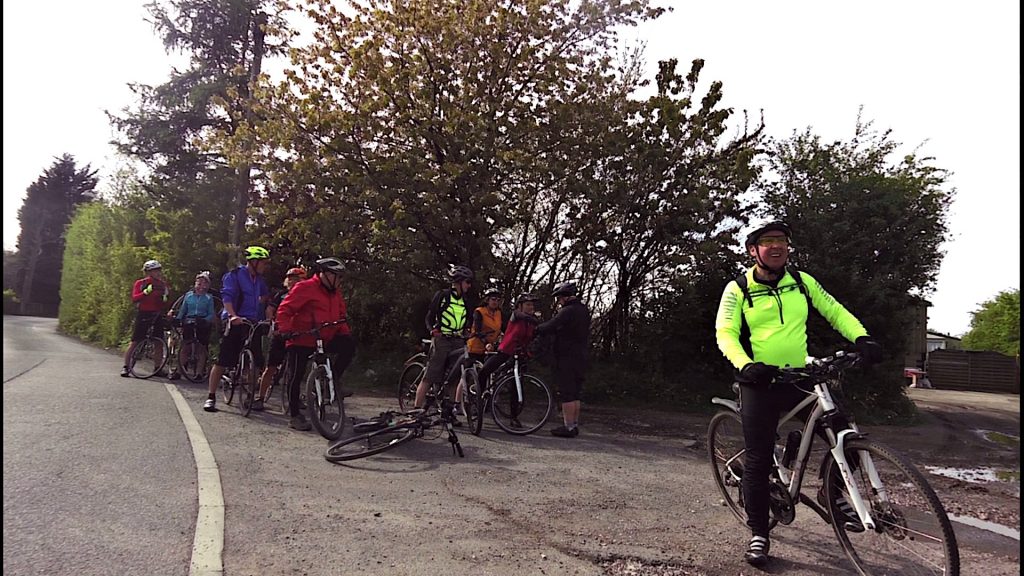 Lucky dip, is it Tracy? 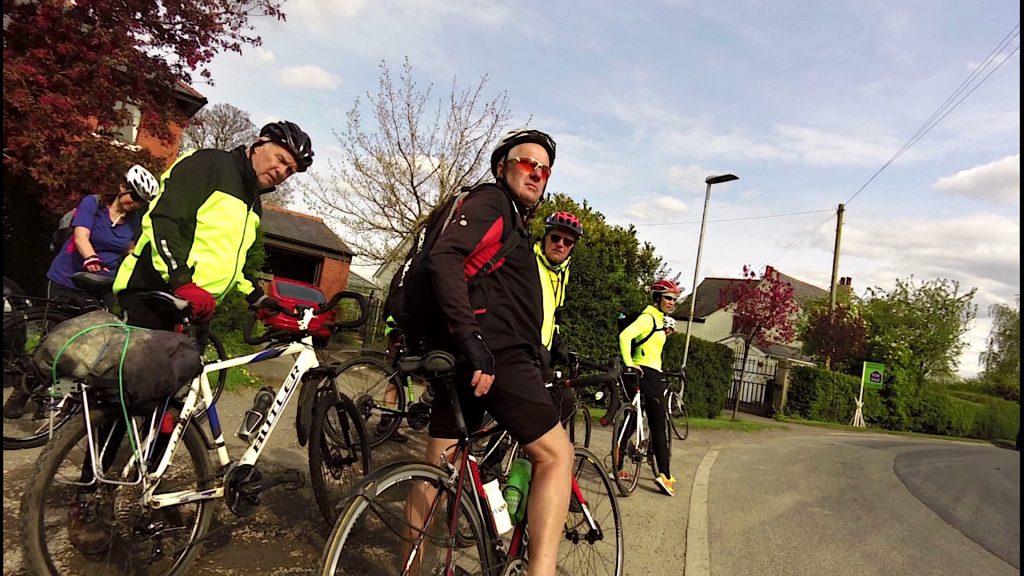 Everyone looking quite serious, probably concerned about the Toucan! 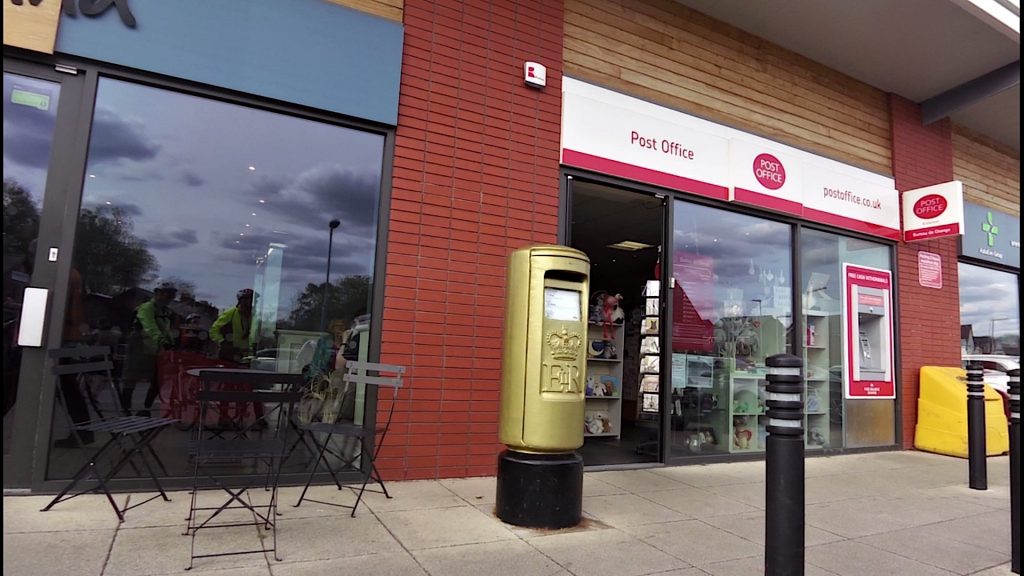 A tribute to Sir Bradley! 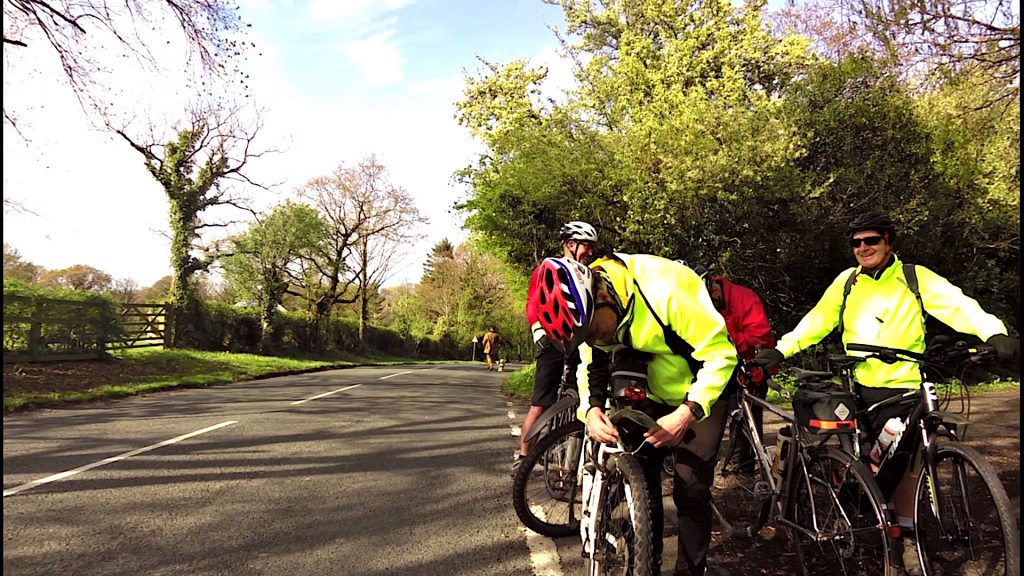 Jim doing his best to affect a repair! 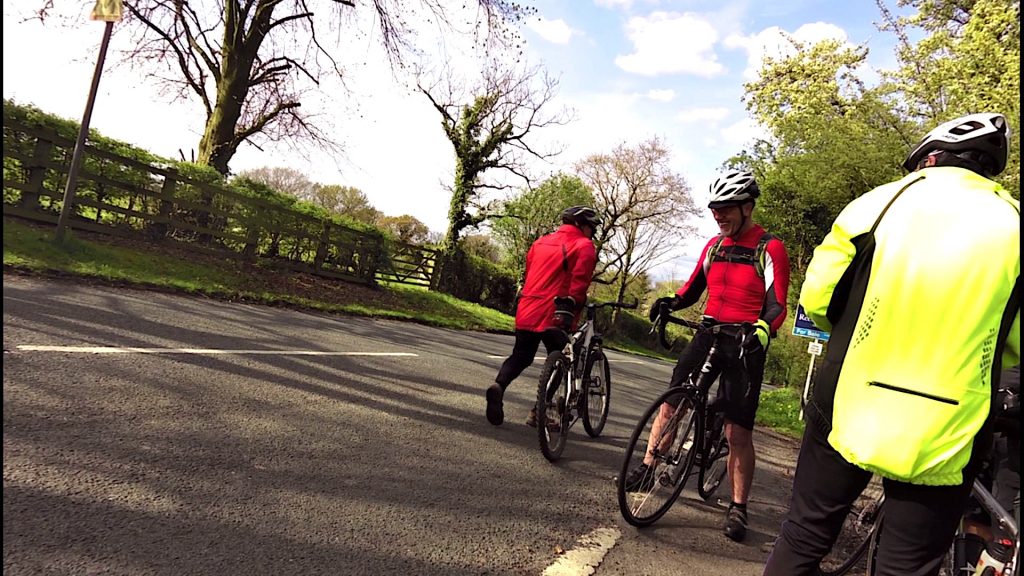 Not to Keith’s satisfaction though, he’s called it a day! 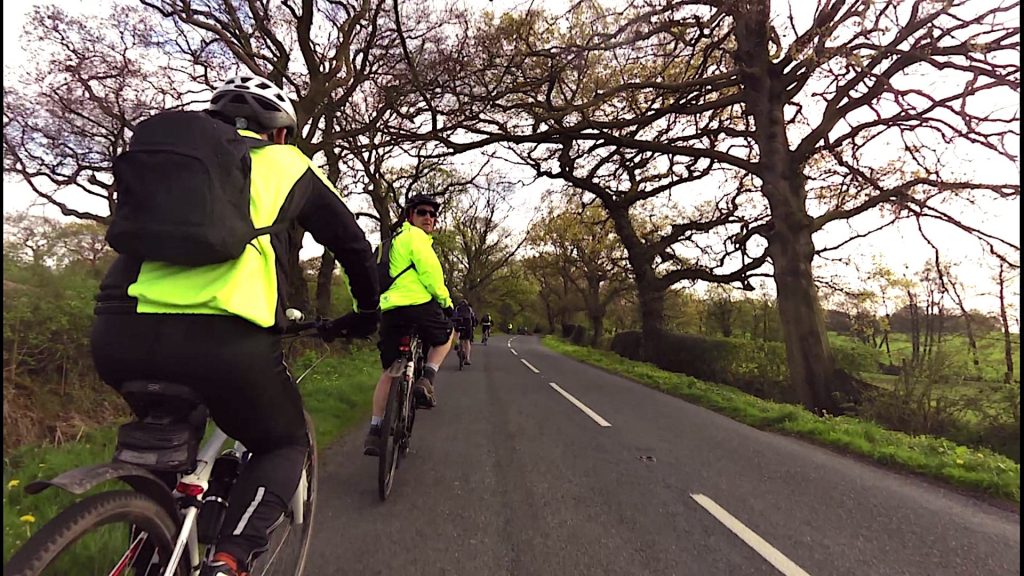 No use looking back Pete, he’s not changed his mind! 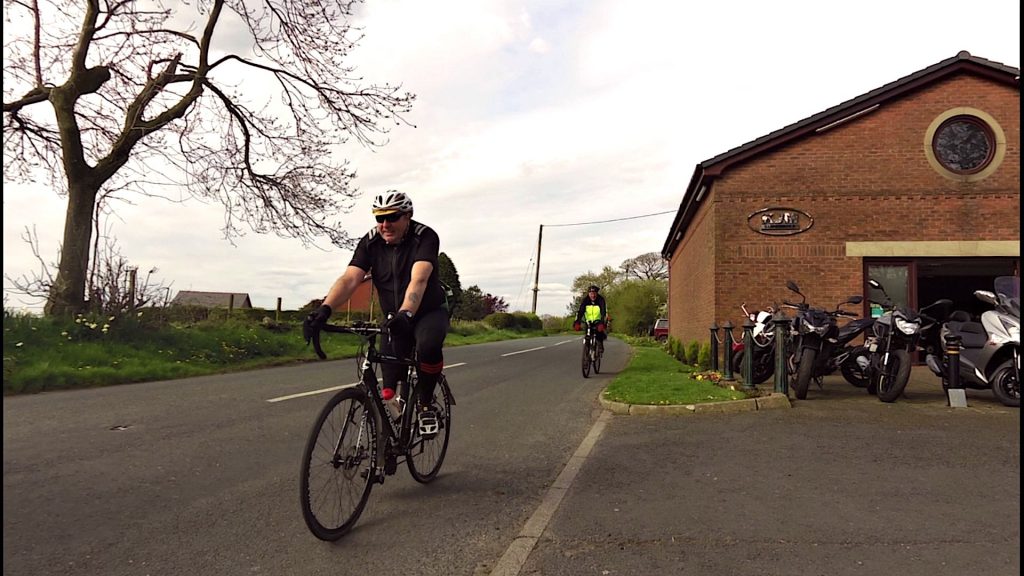 Cardiac Hill over with, almost all downhill from here. I did say Almost! 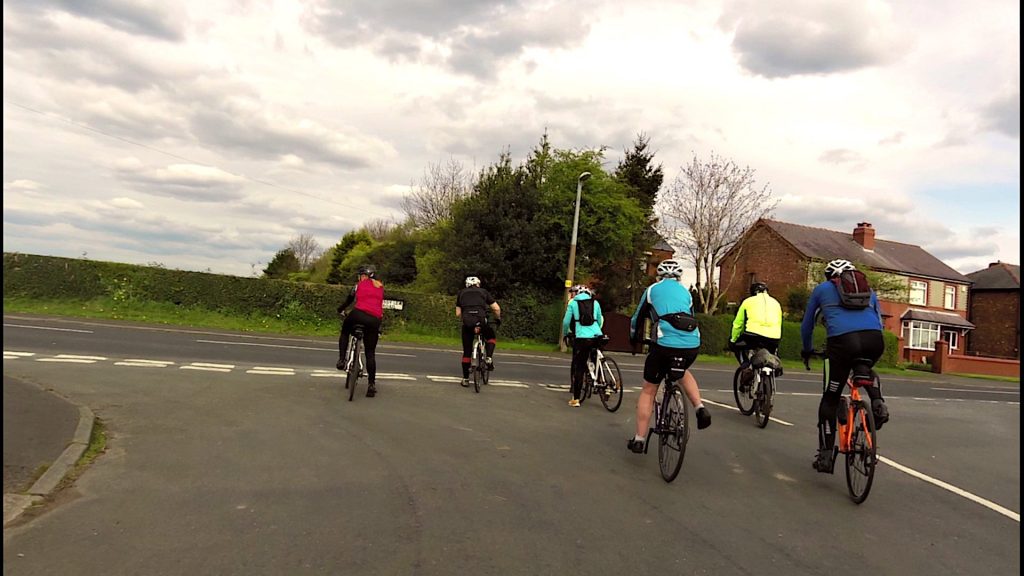