Thirteen of us emerged from the pub around 7.15pm to Ride the Lights. Thelma was dressed in a cherry and white striped top and socks which went down well with the rugby fans, Denis, Roy and Phil 1. Not sure whether Steve, a Latics man, felt quite the same. He nearly cleared off to Bloomfield Road to watch the Latics but we managed to convince him that he’d have a better time with us. The guys were ready for the off with lights on their bikes and not much else but it was soon apparent that Thelma, Liz, Tracy, Sue, Rita and Carole had raided their Christmas decorations as they festooned themselves and their bikes in an array of lights.

We decided that Steve and Thelma should lead the ride as we couldn’t fail to spot cherry and white Thelma no matter how many cyclists were taking part. It proved an inspiring decision. We joined the parade of bikes at Squires Gate with hundreds of bikes of every shape and size slowly crawling along the front. We gradually overtook the slower bikes with little kids pedalling away rapidly and their parents following behind. Every now and then a rogue kid would shoot in front of us weaving his way through the mass of bikes oblivious of whom he crossed in front of. You have to have your wits about you on this ride. You can’t spend too long looking at the illuminations or someone will have you. Tracy was occasionally showing off her camera skills photoing others with her mobile phone while Steve tried videoing behind himself with the camera over his head. The results have yet to be examined.

A group of young local yobs went past going along the tram tracks in the opposite direction causing a tram driver to hoot at them. There’s always a few who have to try to be clever! On the positive side, we were delighted to see the pope taking part and several of us received a blessing from him as we passed. Tracy also blessed a mother who cycled straight across her path and nearly crashed into her. The pope didn’t use the same words as Tracy – thankfully.

We stopped at Bispham for a photo shoot before starting the return journey. Everyone arrived close together thanks to cherry and white Thelma. On the way back Tracy got chatting to a guy on one of those bikes with big fat wheels. We thought she’d tapped up but his tattooed girlfriend had a beady eye on them both. After a brief chat he sped off doing a wheelie to show off. We weren’t impressed though Jim H did say that he’d always wanted to do a wheelie but not managed it. There’s still time, Jim.

We continued to weave our way back picking up a bit of speed as the crowds of cyclist thinned out near the Pleasure Beach. We arrived at the end of the ride (all together) where we passed under an illuminated sign that said Welcome to Blackpool in between a range of psychedelic colours. Steve endeavoured to take a photo of us just as the word Blackpool appeared. It took long enough so let’s hope he was successful when we examine the video.

It had been another fun ride and we joined lots of other cyclists as we left the illuminations behind and returned to our parking spots at Lytham St Anne’s. We’d covered 15 miles in around two hours so not our fastest average speed for a ride. Mind you that was faster than the average speed on the M55 which was down to one lane for a long section with no access to the M6 southbound. Some of us only arrived home around midnight. Phil 2 and Sue were the exception as they had rented a £5 plot at Lytham for an overnight stay in their motor home. The lucky beggars were probably snuggled up in bed before the rest of arrived home. Nevertheless, it had been a really enjoyable day. 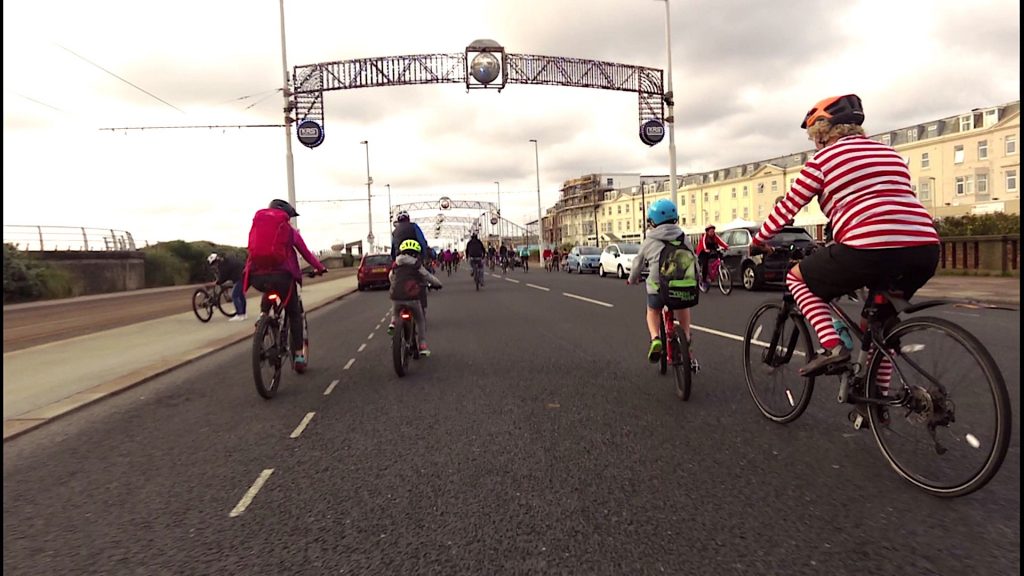 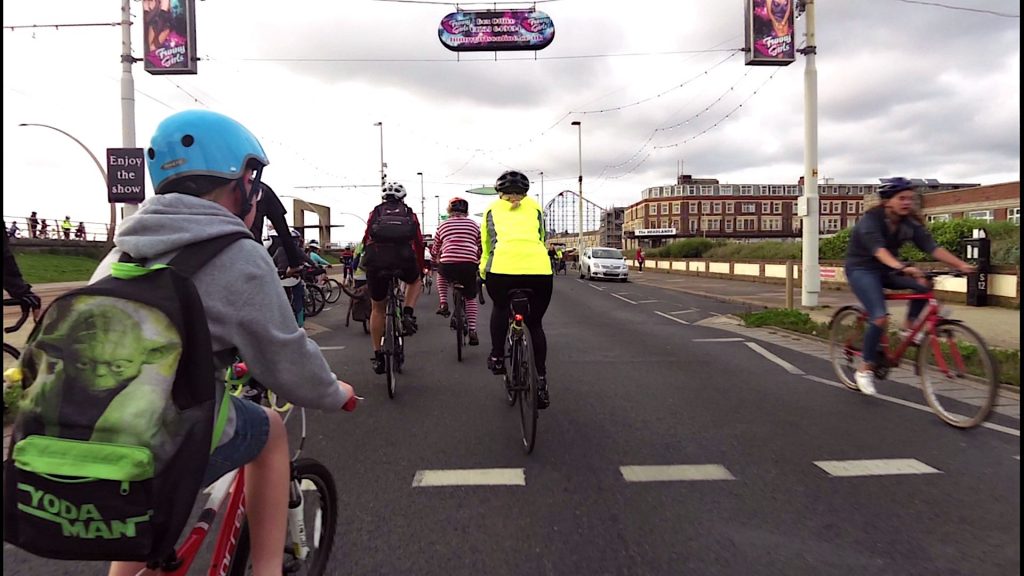 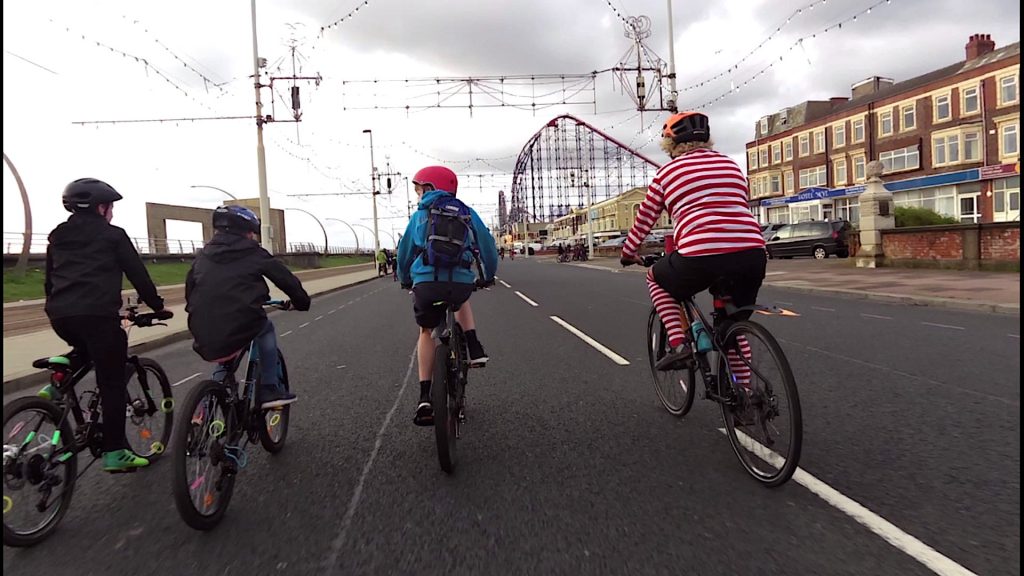 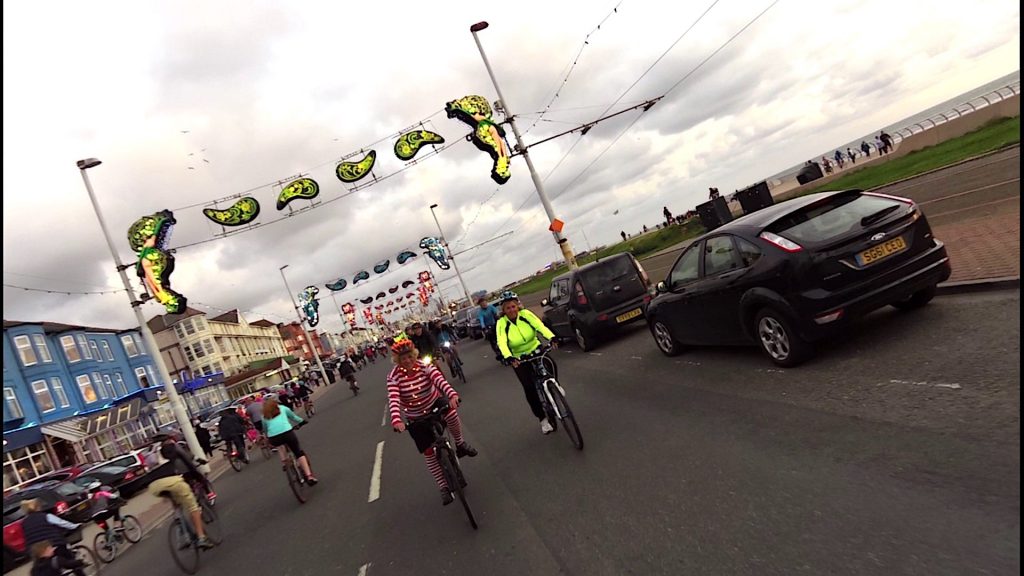 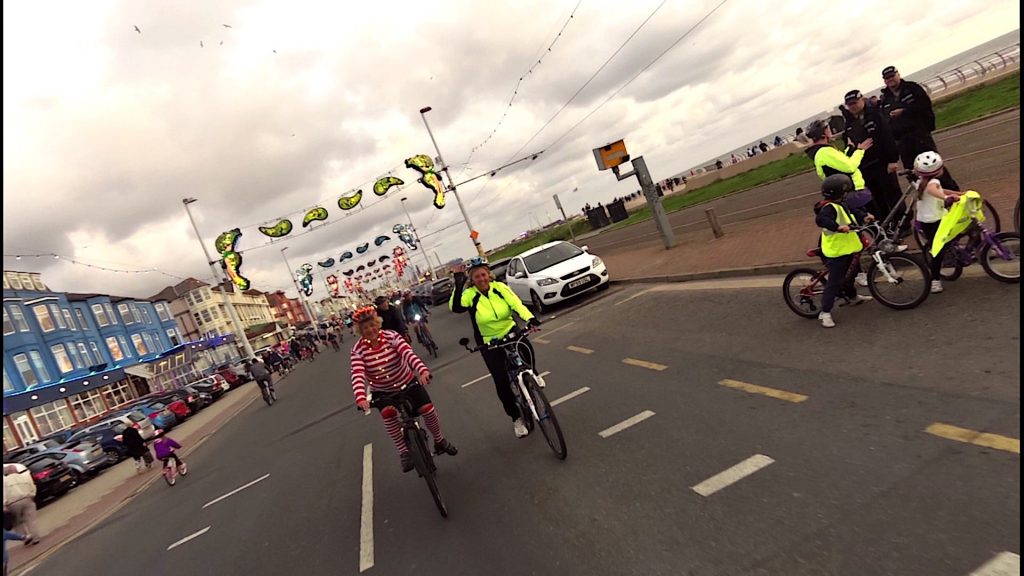 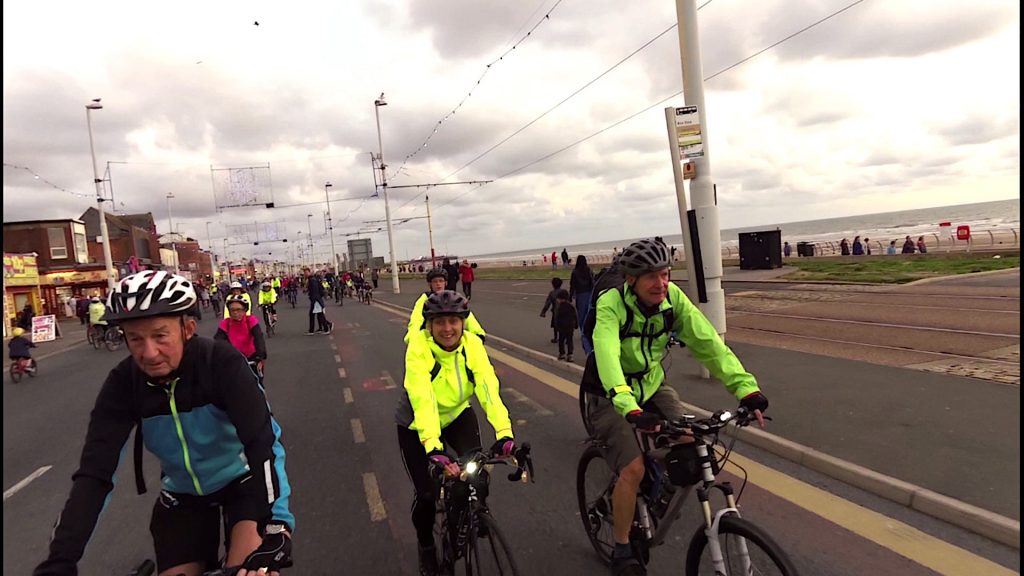 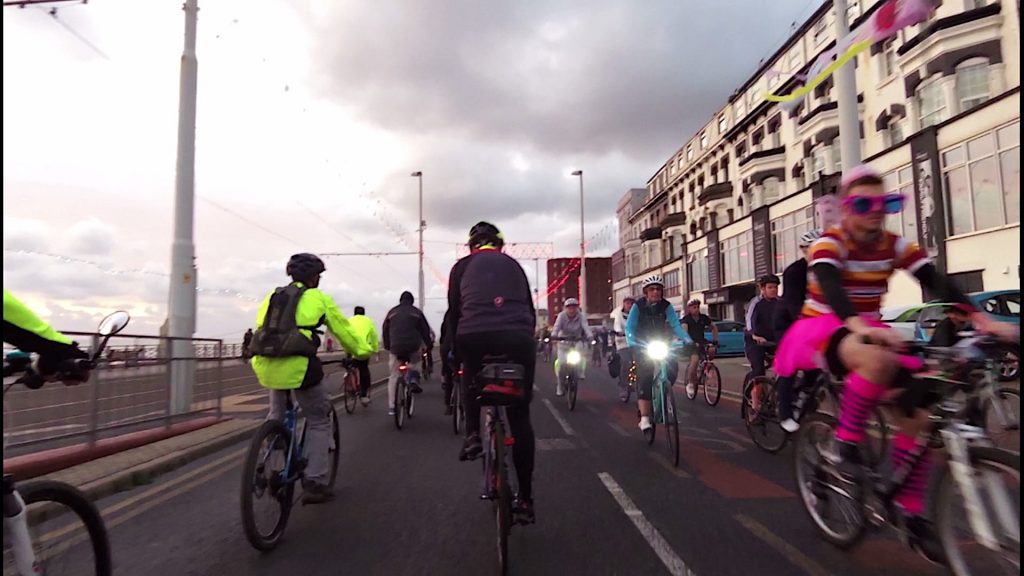 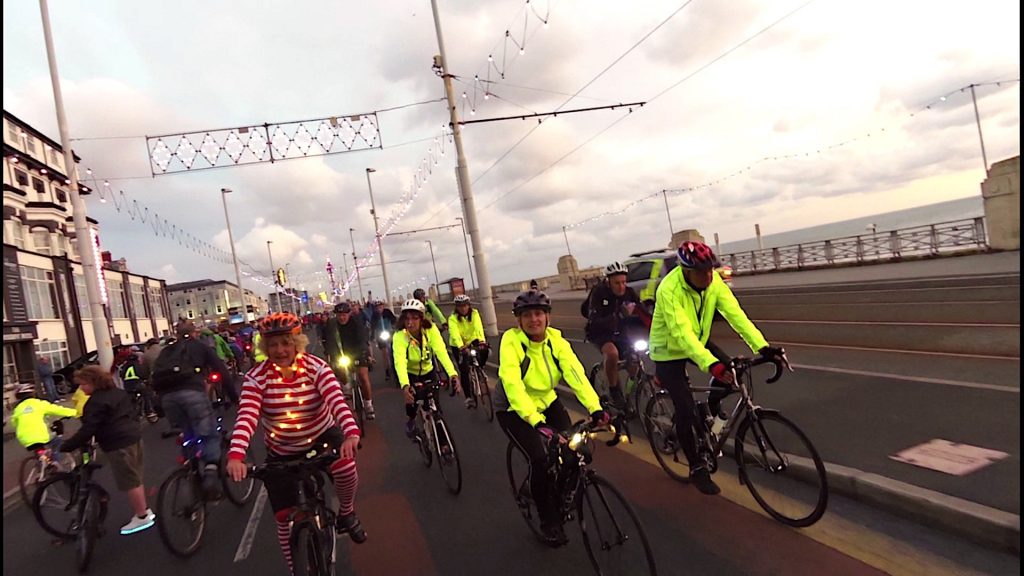 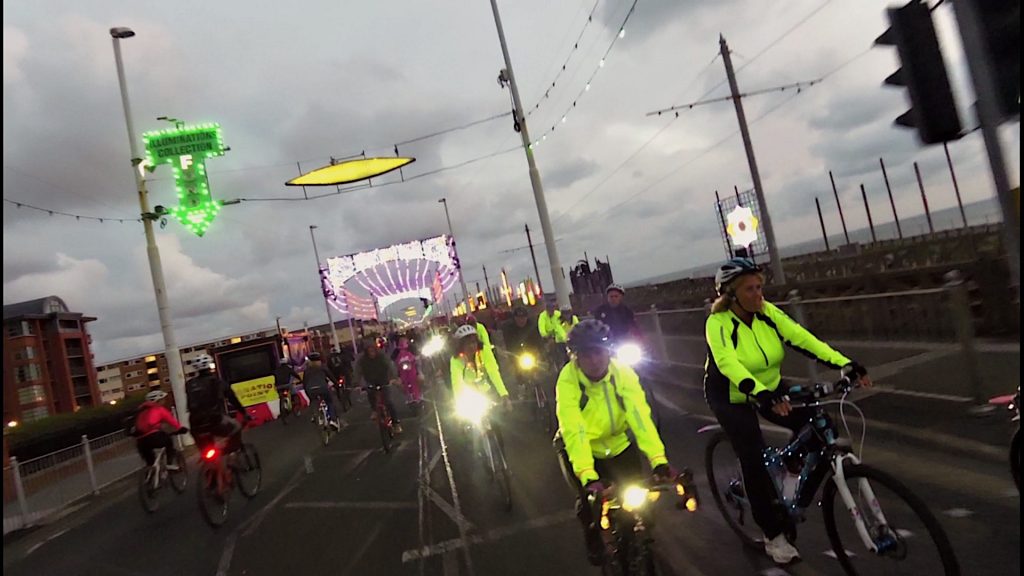 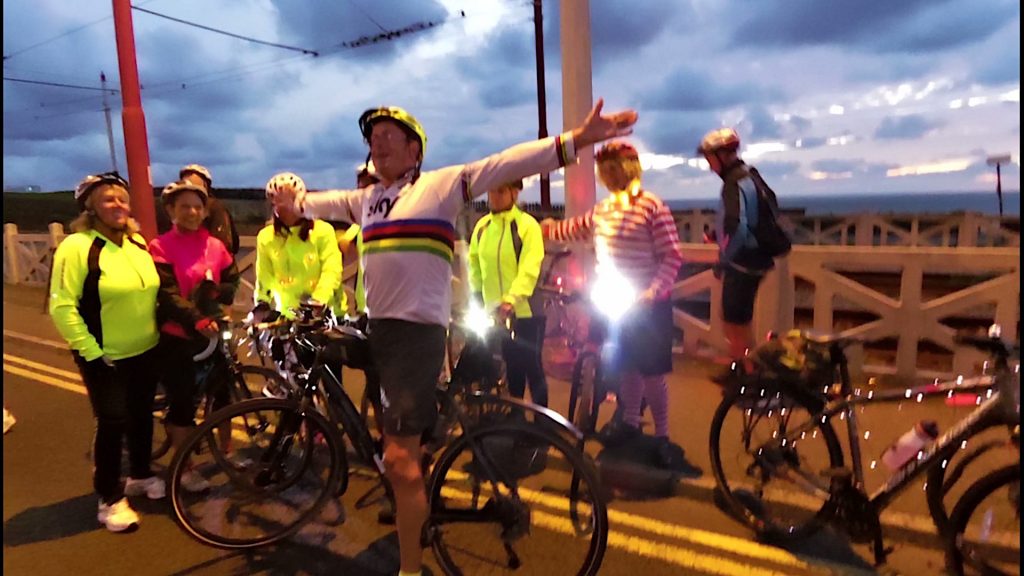 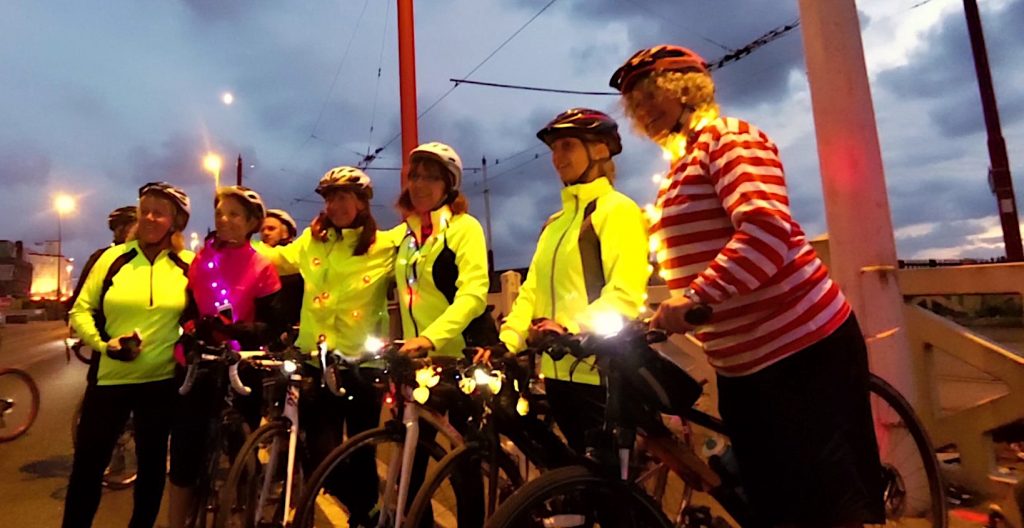 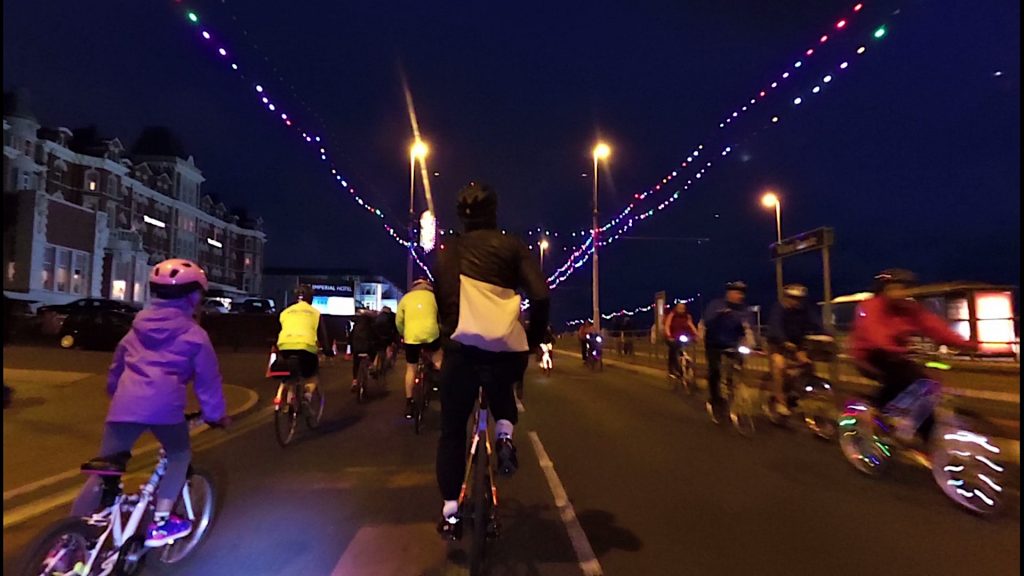 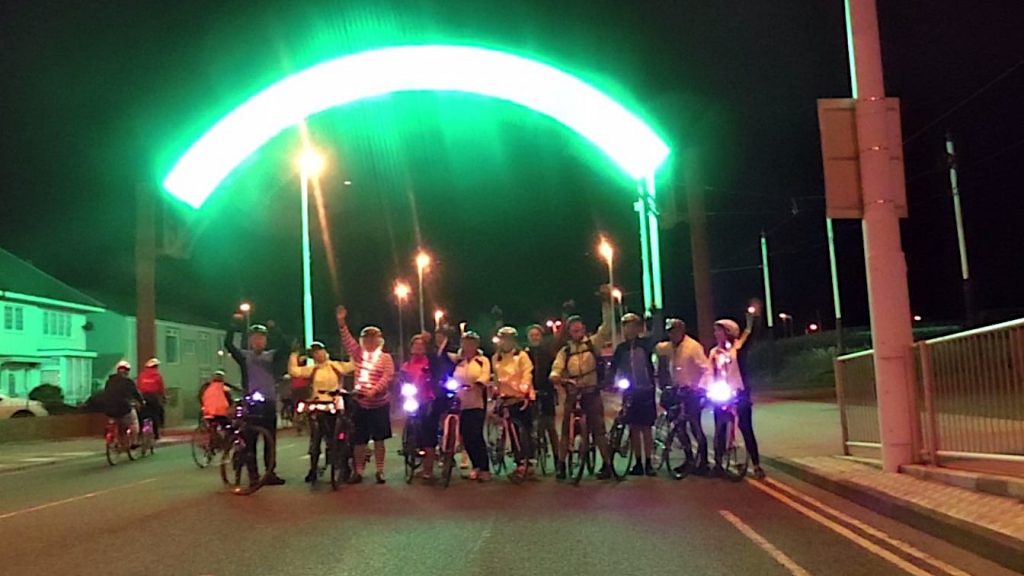