From the comments it seems to have been a good ride – wonder what the report will show?

I managed to arrive nice and early for this one. Priority was to ensure those who arrived by car would park in the far corner of the car park.   I had visited the pub on Friday to do the pre-ride and check if the land lord was ok with us to use the Car Park, his initial response was No, as he had previously had too many cyclists filling the car park and not been gone by their estimated time, this was understandable as he has only recently returned to this establishment after an absence of six years, they have completely redecorated and put on a new menu for those who may be interested. He changed his mind when he realised it was only to be a small group.

As the riders began to arrive it was very surprising to see the bike types and attire, I was beginning to wonder they may have been better attending the McEvoy Classic over at the Ring ‘O’ Bells which was also on. It wasn’t long before I spotted a couple of bikes with flat bars so I didn’t feel out of place. No absentees either this time and even one (Chris) being the unexpected attendee.

First task of the day, allocate the camera – after a brief silence Pete stepped forward, second was to assign radios – obviously one for me, Roy volunteered to take one as back marker and Jim took the third. A quick run through what to expect from the ride with the long downhill start and the flat, open and unsheltered farmland to follow. The last check we to see who had managed to get the route onto their Garmin – Pete was the only one who had.

In order to keep everyone happy it was proposed we allow the ride to stretch out but to concertina when appropriate to ensure we did not lose anyone. So off we set, Pete getting off first to catch everyone on camera.

After the long downhill start we were soon on level ground with Pete riding like a yo-yo through Newburgh, Hoscar and Bispham Green. We had pulled over on Maltkiln Lane to regroup. Pete took this opportunity to retire as ride camera man, being on what was most likely the heaviest bike this made perfect sense, however, no one else was up for the job and it seemed pointless to just have rears on camera or just open roads. Camera packed away and on we went through Rufford and on to the first stop of the day at Brandreth Barn. A quick check and comments of too early for cake were heard. Tea and coffee were duly consumed along with Ginger biscuits kindly provided by Roy.

The camera was out for a couple of snapshots and I was going to continue using the camera by hand when the chance arose, but Jim stepped forward, the camera was soon on Jim’s bike and he was familiar with how to operate it. Prior to continuing the ride there were several people checking each other’s bikes as some had not been seen before, this was followed by asking the reasons why people had chosen the bike they had, Chris had asked for a bike suitable to do the London to Paris ride but did not want drops for comfort reasons and his bike was recommended for him, Joyce bought hers because it was Purple.

We were soon underway with Jim happy in his new role shooting off in front almost always finding spots where we least expected him with the camera, it was as if he knew the route off by heart having never done it before – although he has most likely covered all of the roads in his time and could find a way back to Wigan without using roads.

All was going well and we could not believe how blessed we were with the weather, first time I have ridden these roads without hardly any real head winds or rain. We progressed through Scarisbrick and Shirdley Hill this lead to the first upset on the ride, from North Moor Lane we took a right turn into Asmall Lane, we came to a halt just after entering the lane for a quick head count – two missing, I was about to head back to the junction but couldn’t do as a very old Bentley had just entered the lane and had caught the attention of Ray and Joyce. This resulting in Roy and Carole riding past the junction but as we could see him we soon caught his attention. They re-joined the group and Roy requested the presence of the ride leader- discussion to be aired at steering group meeting – but for everyone else why was no one visible on the Lane junction, there is only so much a ride Leader can do, plan a route, pre-ride and risk assess a route, lead the ride, video a ride, edit camera footage, take the register, write the report, surely one task for someone else should be simple enough.

Now slightly distracted and not fully concentrating on the task at hand a turn was missed but we were soon back on track, just for reference not the same turn I missed on the pre-ride just two days earlier.

We were soon at the Hayloft and the group split between those who chose to take lunch inside and those who preferred to stay in the sun. When we regrouped we discovered that those who dined outside and had brought their own lunch but had purchased drinks had been told that the owner would not have appreciated the fact they had not purchased food, it’s a good job Roy did not get his Ginger Nuts out inside.

Fully refreshed we were off again as we crossed to A59 we noticed an unusual amount of surface water, as we progressed up Swan Lane the source of the water appeared to be coming from the ground at a house on the left. As we got closer it was clear that a hose pipe had come off the tap. Peter expressed concern that if the household was on a meter it would be rather expensive, he decided that to knock on the door was the right thing to do. He rode down the drive on his good deed for the day and obviously did not hear the shouts from the rear garden the rest of us heard – clear off, go away, I don’t want any. Oblivious to these rants Pete did inform them at the amount of water they were pouring down the lane. When Pete was made aware of what we heard he wished he hadn’t bothered.

Good progress was made through Holt Green, Bowker’s Green, Bickerstaffe, Rainford and Crawford. Then the questions came as to which route we would take back to the finish the easy way or the hard way. Is there an easy way back to the top of the Beacon? I know there is a at least two tougher than the one we took. It was to be Pimbo Lane, Tower Hill Road, Mill Lane and finally Beacon Lane.

A request was made for a drink stop before this was undertaken so we stopped for a break as we reached the M58. Refuelled for the finish off we went, as we got closer to mill lane being the lead group we had a brief discussion on whether to stop and regroup or continue to the finish. We decided to continue as we thought all riders would be familiar with where we were and how to get back to where we started, as this part of the ride has been on many times.

Back at the car park though not everyone was happy with us not waiting, well at least one person. This could have been due to the fact that the two people with the route were towards the front although the camera that was at the rear followed exactly the same route. The rider of the day being Carole who had finished the ride, so had climbed the Beacon twice and had done the highest mileage of the day.

Half of the riders needed to leave and the other half retired to the bar to take a final intake of fluids. 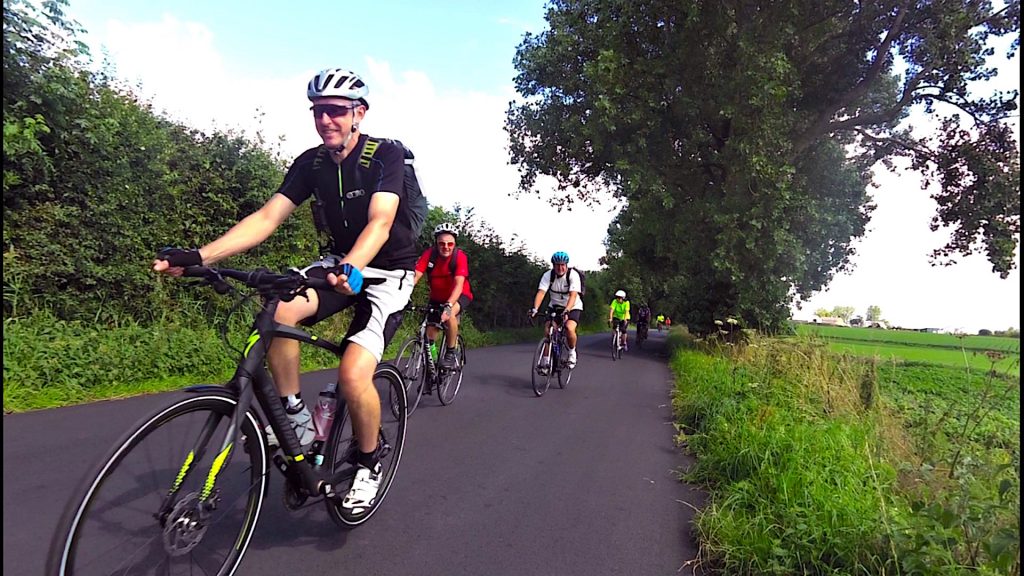 Nice day for it! 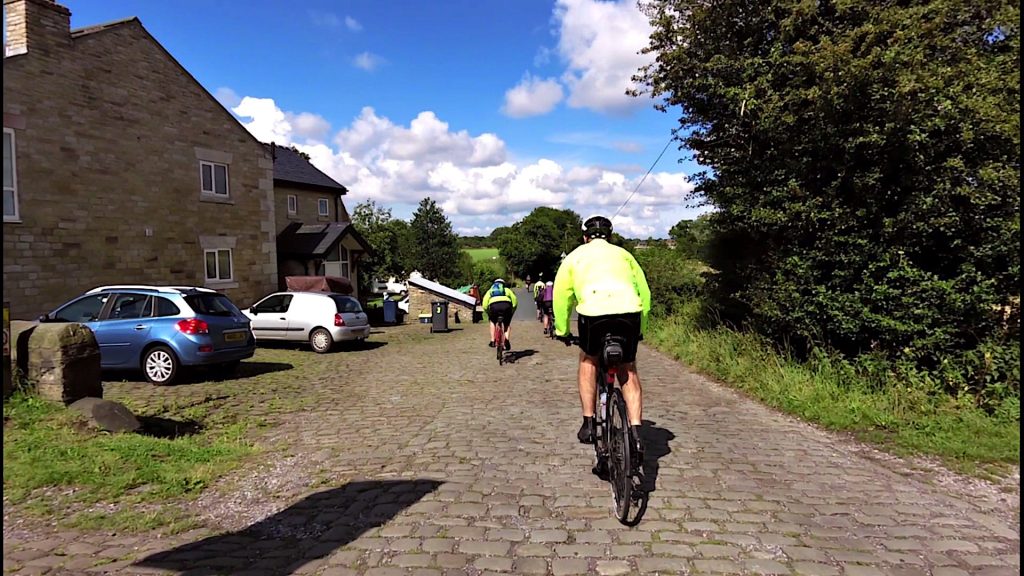 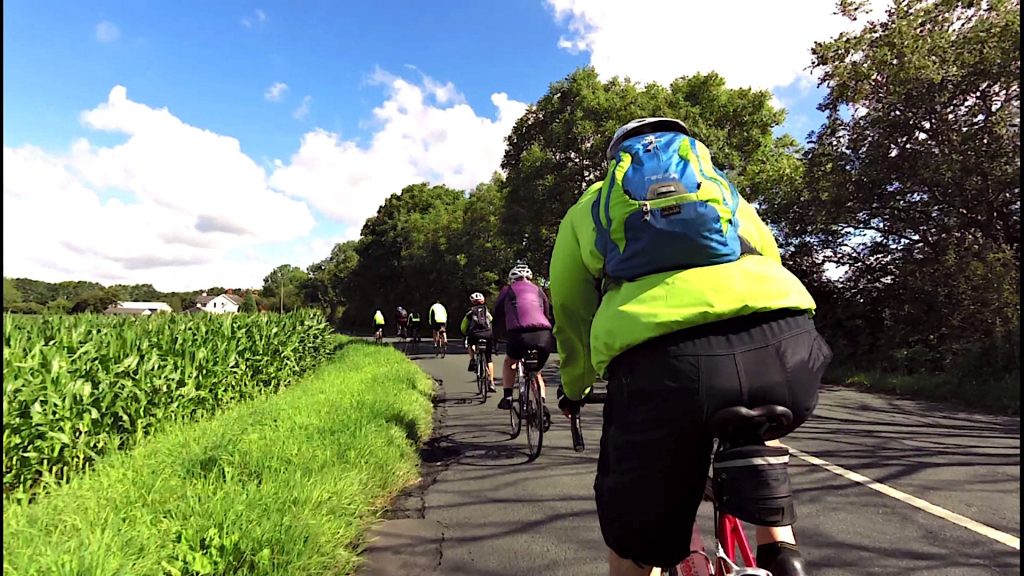 Coats on this weather??? 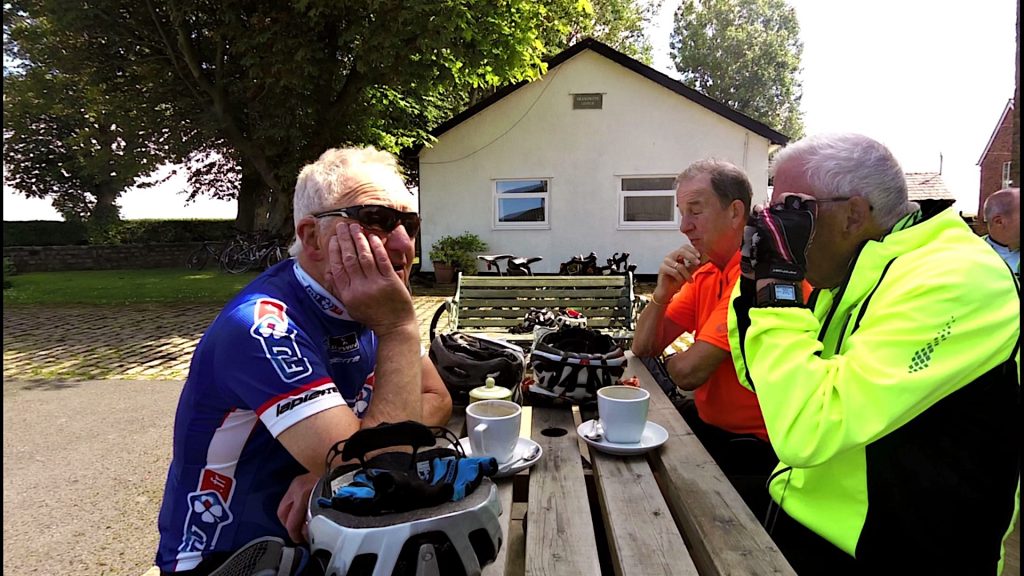 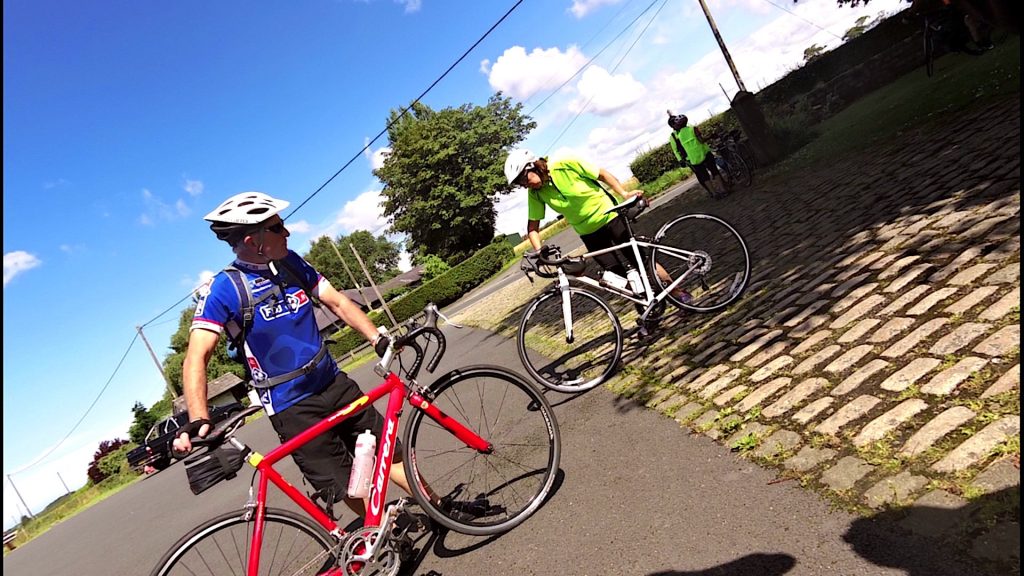 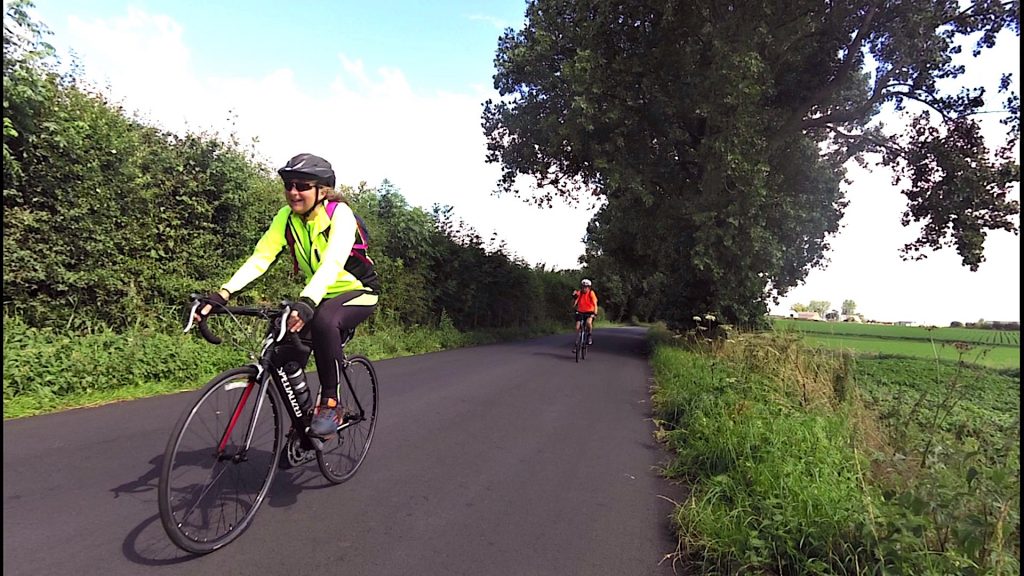 Wait for me Doreen! 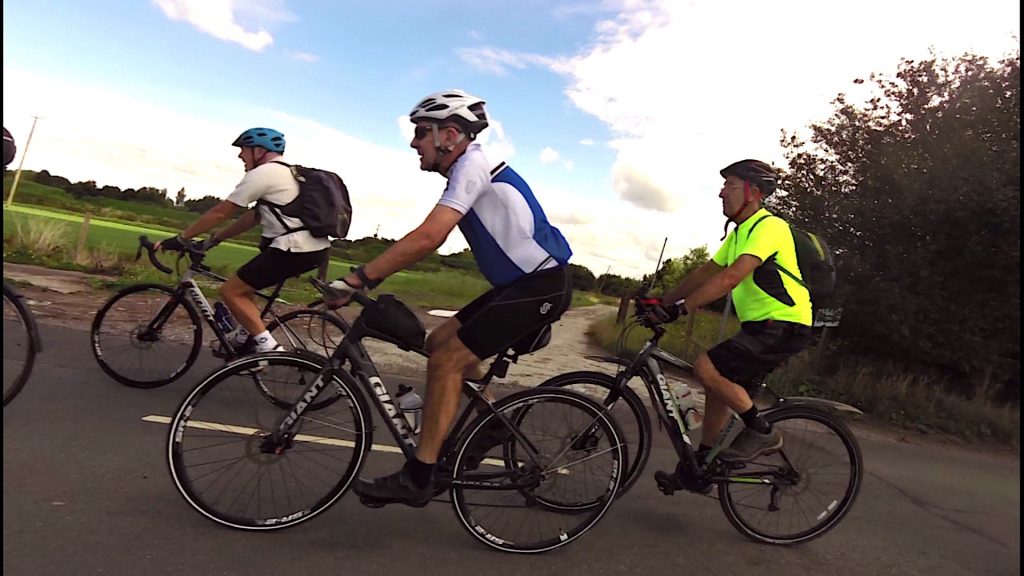 Men on a mission! 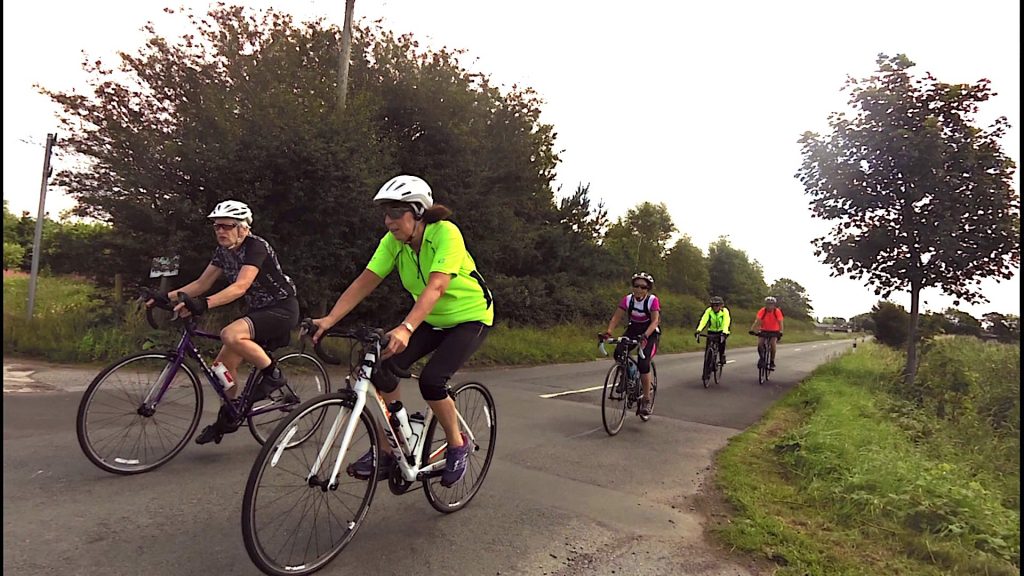 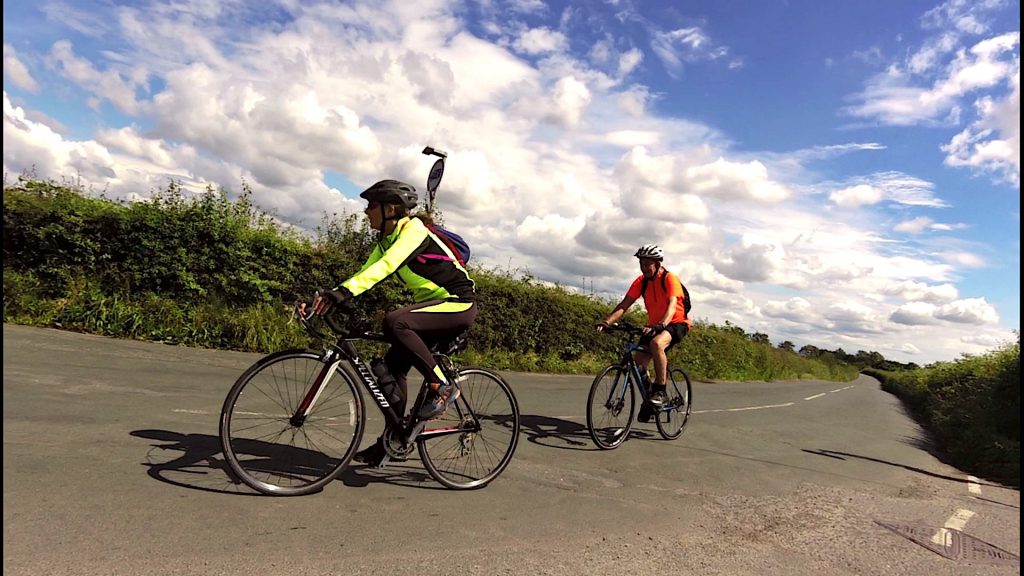 He’s either caught up, or Doreen felt sorry and duly waited for him! Who’d be a back marker? 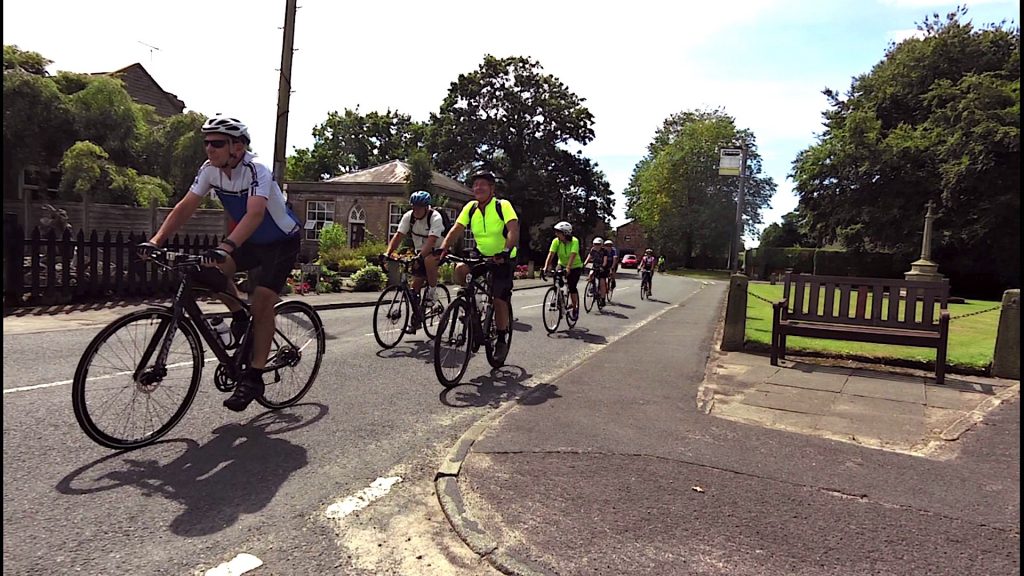 Mustn’t have pushed them hard enough Mark, empty bench and nobody made use of it! 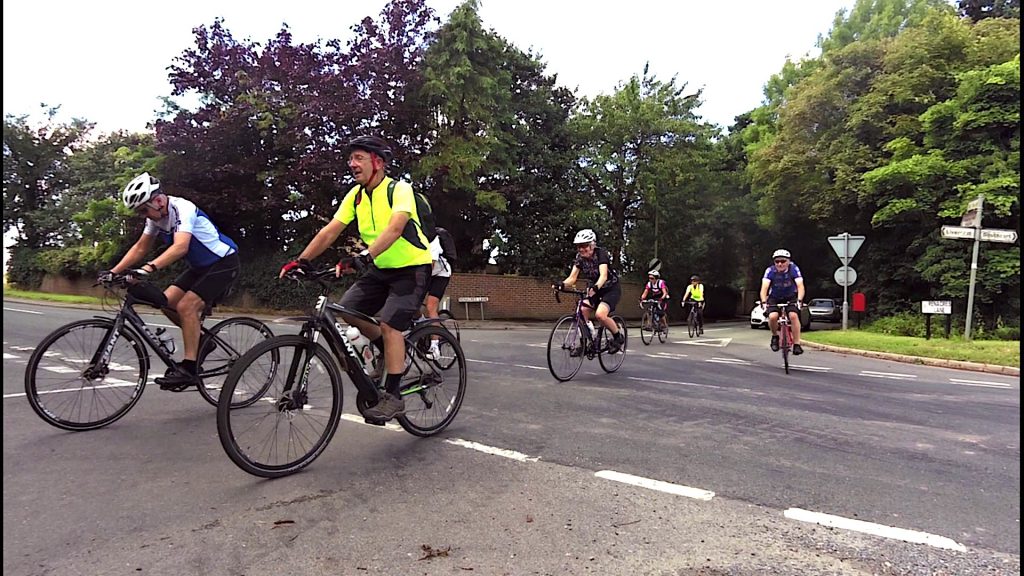 Hayloft calling if I’m not mistaken! 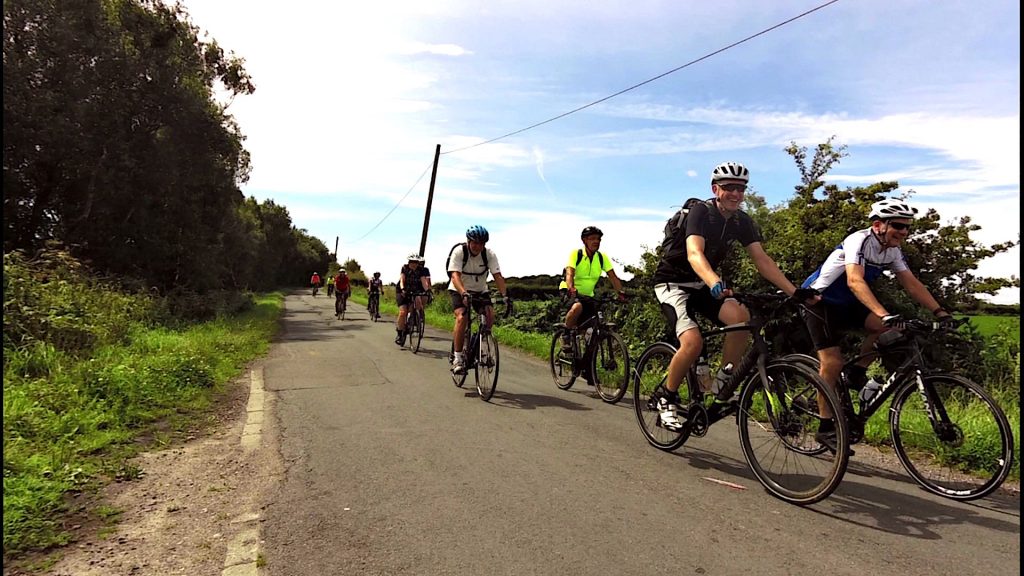 Great route Mark, when’s your next one? 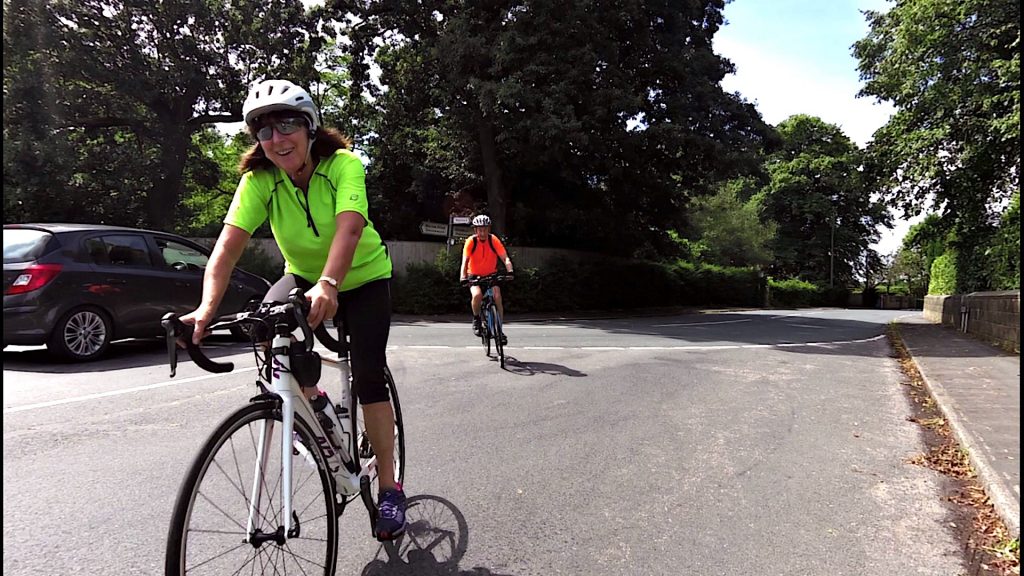 Our back marker doing an exemplary job, cheers Roy!